Hi there, on January 14th something strange happened on my Spotify account: Every few minutes the music play stopped because a different device overtook. Everytime it was an iPhone from a female. But every time a different one. For example "Aliza's  Iphone", "Johanna's Iphone", or, as you can see in this screenshot, "Carmen's Iphone": 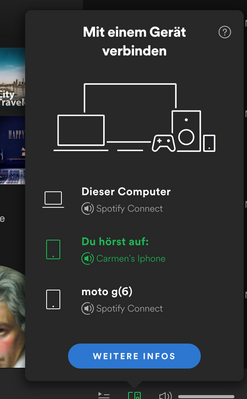 You have to be quite fast to see this, because after a minute or so this fakes (I assume) disconnect again.

When I later looked at my recently listened music, I realized two playlists I never listened to:

As you can see in the screenshot: It's the same playlist with the same 25 tracks. The "Chill Tracs" playlist isn't in my spotify anymore (maybe the Playlist or user was deleted?), but here is the link to the "Dope Tracks" playlist: https://open.spotify.com/playlist/16B5f5MotKnRlkU6U6i6Pf?si=CmsyqQSmRkONmj8wPru5Kg 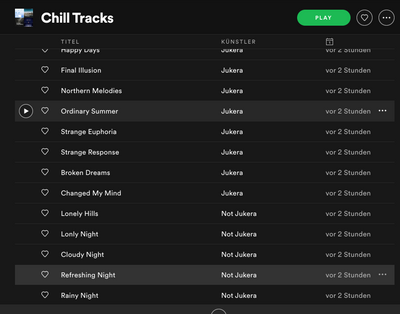 I also can see two playlists, I have allegedly created, both with the same name: "FrkyFrDay777". Both contain only one song: In this case ( created December 8th 2019)  it's "Seal the Deal" from "Milidia Scarlet": https://open.spotify.com/playlist/5Txb2qcU3ios6EozeZZlTN?si=MnvxRaiJSt2aSk51aF92QA

In this one (created January 14th, when I hade the problems mentioned above) it's "Changed My Mind" from ... wait for it .... Jukera! (https://open.spotify.com/playlist/7c5M3cWtnp6wdr0LEbdnPv?si=XaZmKU5KROeu4j7SuhIeWA)

So on January 14th the problems happened on my Mac Book at work. I hab problems like this  (some other device overtook the music play and my music stopped) already a few weeks ago (probably on December 8th, when the other one of the "FrkyFrDay 777" with the "Seal the Deal" song was created) on my Windows PC at home. So I don't know, if the other devices was always shown as girls Iphones as well.

I log in via Facebook (account since 2012). On Facebook I use two-factor-authentification for around half a year and had also changed my PW after that. So I can't realy imagine my account was hacked. But was your system hacked or something. Or was all of the a hiccup in the database or something? I would like to know, what happened there? What's for example going on with this identical playlists with "Jukera"- and "Not Jukera"-songs?

Looking forward for your answer,

Labels:
2 people had this problem.
Reply
1 Like
12 Replies
Highlighted

Hey, @REDDF1VE
Welcome to Spotify Community and thanks for reaching out here!

I know that you've already taken some of these tips, but I'd like you to consider these steps again:

And you can get more information about how to protect your account here.

If you have any other further questions or need more help, let me know! I'd love to help!

hezorgRock Star 7
Help others find this answer and click "Accept as Solution".
If you appreciate my answer, maybe give me a Like.
Note: I'm not a Spotify employee.
Reply
1 Like
Highlighted

Thanks for telling us about this and giving us all of these screenshots!

In addition to what @hezorg said, we'd like to tell you that we've reported these fraudulent artists and streams so this music content won't go unnoticed.

Keep us posted if you see anything like this again, so we can take the necessary actions from our side.

We're here for you!

PetyaModerator
Help others find this answer and click "Accept as Solution".
If you appreciate my answer, maybe give me a Like.
Reply
0 Likes
Highlighted

I am having the same issue as well, and I don't think it's a matter of signing out of all accounts and changing passwords. I have had the playlist 'FrkyFrDay777' be created and recreated on my account many times (screenshot attached). Earlier today someone named "Kaleigh" was listening to the playlist on my account. I have also found this Reddit page of SEVERAL other people reporting the same issue. This is a bigger security issue that needs to be resolved. https://www.reddit.com/r/truespotify/comments/efzdcd/a_playlist_showed_up_on_my_account_that_i_didnt... 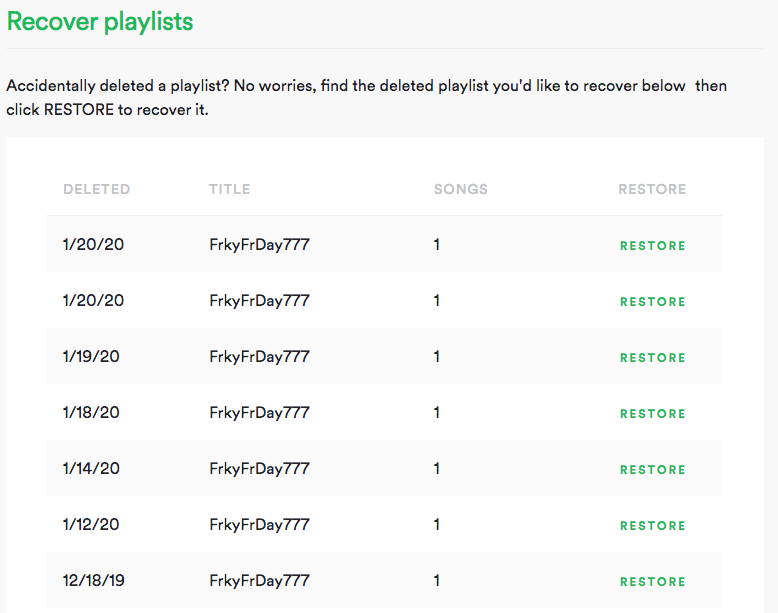 Hey, @carrinli
Welcome to Spotify Community and thanks for reaching out here!

Sorry to hear that! Have you already tried the tips I've mentioned above?

hezorgRock Star 7
Help others find this answer and click "Accept as Solution".
If you appreciate my answer, maybe give me a Like.
Note: I'm not a Spotify employee.
Reply
0 Likes
Highlighted

Did all "these steps" half a year ago when this problem showed up.. contacted the support too to check the account logins and all but they said there was nothing special.. and looks safe ..?

Didn't get a notification that a new device logged in .. nothing .. no other location or something ..

sorry for bad english .. its annoying..!

matzehg
Regular
thanks for nothing..
Reply
0 Likes
Highlighted

Yes, of course. If you go to the Reddit link I posted above, you will see that it's a prevalent problem.

Yeah i think there is a lot of content only for money generating..

carrinli
Casual Listener
Yes, of course. If you go to the Reddit link I posted above, you will see that it's a prevalent problem. And it's persisting. The playlist keeps on getting created and deleted. Also, someone logged on to my account from Germany. I'm located in the US.
Reply
0 Likes
SUGGESTED POSTS