We use cookies to give you the best online experience. By using our website you agree to our use of cookies in accordance with our cookie policy. Learn more here.
Announcements
Current information of our Google Nest Mini Offer can be found here.

I had an old account on spotify which apparently was linked to Facebook. I kinda forgot about it and created a new one, which is a premium account.

When I tried to connect Facebook from within the iOS app, it displayed that Spotify is already authorized, after returning to the app, it wouldn't update and display a list of friends. Tried it a couple of times and even removed and reinstalled the app.

I also went to Facebook and deauthorized Spotify from there, and connected to facebook in the app again. Didn't work.

In the web interface, Facebook wasn't connected either, and after I click the Connect to Facebook button it just says "An unexpected error" occurred and I should try again later.

In the Mac Desktop app when I press Connect to Facebook, a popup window appears which lacks any design (see attachment) and which states that my Browser has no cookies enabled. But I'm not in my browser, I'm inside the Mac app..?

What should I do? Looks like an internal error? 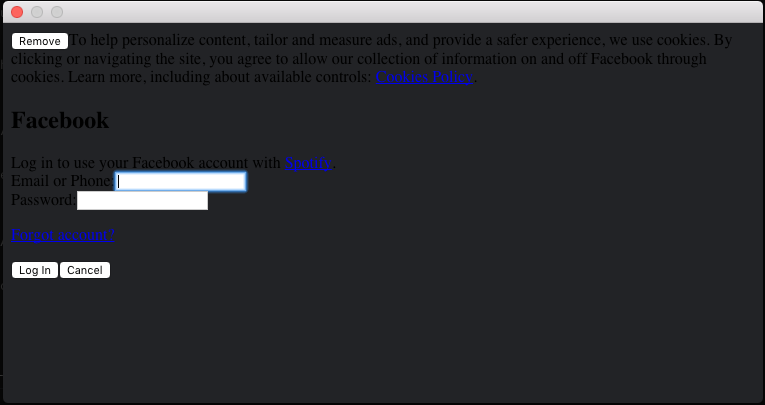