Caution, dont stand up to Spotify if you catch them over charging you

Caution, dont stand up to Spotify if you catch them over charging you

I caught Spotify charging me more than they were supposed to (2x more). I contacted their support (or tried to) and they gave me the runaround each time, so I finally had no choice but to open a PayPal dispute. Paypal asked for receipts and copies of emails and yesterday decided in my favor and refunded me the amount that Spotify overcharged. Spotify didn't like that so what did they do? They deleted my account, playlists and community account (this is a new one I had to create with a 2nd email) and blocked me from all services preventing me from creating my account over again or linking a new one to my facebook.... Good job Spotify, you turned a billing dispute into a FTC and BBB complaint...

jhebbel
Regular
Have fun Spotify. Way to not own up to your screw up and take it out on the customer. 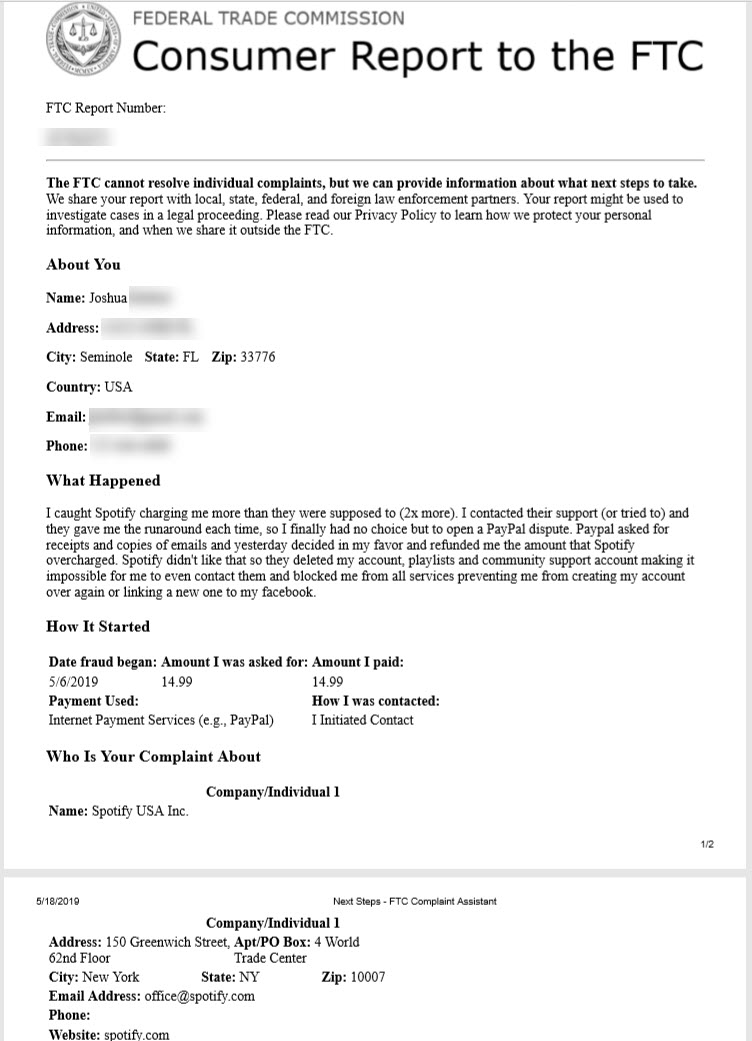 Spotify's general approach to disputes appears to be to ignore the problem and hope it goes way.

I followed the instructions in Section 24.2.5 of the end user agreement, which is found here:

I sent a notice by certified mail to the address in end user agreement. That notice was delivered to their office on May 7. I have not yet received a response. At this stage, I do not really expect to receive a response.

30 days after the date they have received the notice, I plan to file a demand for arbitration with American Arbitration Association. That requires payment of a $200 filing fee. However, the end user agreement states that Spotify will reimburse me for that fee--even if I do not win the arbitration case.

Arbitration is like suing them. But it's faster, cheaper, and you don't need a lawyer.

My guess is that they will begin taking my dispute seriously after they receive notice of the arbitration case from the American Arbitration Association. But at that point they will already be required to reimburse me for the filing fee.

An order issued by the American Arbitration Association has the same force as a court order. If the AAA orders them to reimburse me, and they don't do it, the courts will enforce the order, and will even require Spotify to pay my lawyer's fees.

They can ignore your e-mail messages, and your chat communications, and your tweets. They can even ignore your certified mail. But they won't ignore notices from American Arbitration Association.

They're just assuming that no one is going to pony up the $200 filing fee. And that's where they are gravely mistaken.

Good. I can't stand it when companies like this think they can bully people just because the steaks are so low that most people wont actually do anything about it. As silly as it sounds the thing that **bleep** me off most was loosing all my playlists that I have spent years curating.

Thanks for posting about this in the Community.

There are many reasons why someone might be being charged double for Premium - we have a detailed explanation of the different scenarios here.

We would just like to reassure you and our fellow Community members that Spotify will never intentionally try to charge anyone twice for our product.

We suggest that you reach out to us next time this happens, since we have a refund policy for users who get double charged.

Furthermore, we suspect that your account might still be active, but that it has been disabled following the chargeback through PayPal, which is why you weren't able to access it.

This can be easily remedied by reaching out to our Customer Support team here, who will be able to take a closer look and see what's going on. Hopefully they will be able to recover the playlists which you mentioned.

Hope that clears things up! Let us know if you have any questions about the above - we're here to help.

It's Spotify's crappy customer service giving me the run-around that forced me to issue a chargeback. Your customer service is atrocous, your banning accounts just because PayPal agrees with me and not you is proof, and thankfully I don't have to deal with it anymore.

Man... you're not alone. The same happened to me the other year. Luckily they gave my account back after 2 weeks of nonstop cursing. They suddenly gave up and cleared the restriction to access my spotify. They even gave me a discount coupon. You better talk to your lawyer... you'll get more by suing them. If you know what I mean.