Everything Awful With The New Spotify Update

Everything Awful With The New Spotify Update

The recent Spotify Update (up to version 8.4.97.807) has made significant changes to the basic design and function of the app that will be further explained below. These changes include:

The effects of these design decisions are as follows:

None of this would be a problem if the changelogs for the app were accurate, because I wouldn't have updated had I known about these changes. But instead, Spotify decides to use the same old changelog notes every time: "We're always making changes and improvements to Spotify..." This tells NOTHING to your customers, and it is done intentionally to encourage auto-updates instead of user choice.

I have attached screenshots of two support conversations that are very telling of how little "Spotify Cares". They are aware of these problems, they have been mentioned numerous times, and they still refuse to fix it. At the very least, an update should be pushed that simply reverts to the previous version of the app until the dev team gets it together. This would take no effort at all, but would allow me to use the app in the meantime, which at this point is completely unusable for me as every line of navigation I had has not just been buried under more submenus (or some other stupid design decision), but has been COMPLETELY FUNCTIONALLY REMOVED from the app. The artists problem also appears in the web app, further showing how the dev team went all in on this assinine design paradigm.

I was told to post to the community, but I know that nothing will ever happen. Just search "triple click remote for previous track Android" and you will see how many years we have been waiting for the absolute dead simplest functionalities to be implemented. Look at any thread about songs randomly becoming undownloaded (usually at the most inconvenient times, of course) to see how "uninstalling and reinstalling the app" is the answer to every issue ever.

Unfortunately, these new "bugs" are "features"; the app is now trash BY DESIGN. Customer support has no way to contact the dev team, which makes no sense because the entire company is based around an app and web services. What kind of customer support can exist, other than that which can directly provide information and feedback to the manufacturer of the product? But I digress...

This needs to be fixed immediately (though it won't) because you should care about how your customers use your app (which you don't) and because it should be understood (which it isn't) that these design paradigms are frankly idiotic and should have never been approved by ANYONE. Every single person involved in this dull-headed decision should have been fired long ago.

I will give Spotify 2 weeks to remedy the issue (which would take one hour to do as previously described), then I am jumping ship and will find another music service. Though I have spent many years curating my music selection on Spotify and praising the company, I will be forced to take the loss and spend MY TIME transferring all of my selections to a new service, which I will certainly tell anyone to whom I would have previously recommended Spotify

Keep in mind, this forum is only here to mollify the users and make it seem like they are being heard. Nothing posted here has ever actually changed Spotify in any way. They will do their own thing, even at the customer's expense, and have never, ever listened to their user's concerns. So, I have posted this knowing full-well that nothing will change, and that I will be forced to leave Spotify and join another, less appealing streaming service. JUST. FIX. IT. 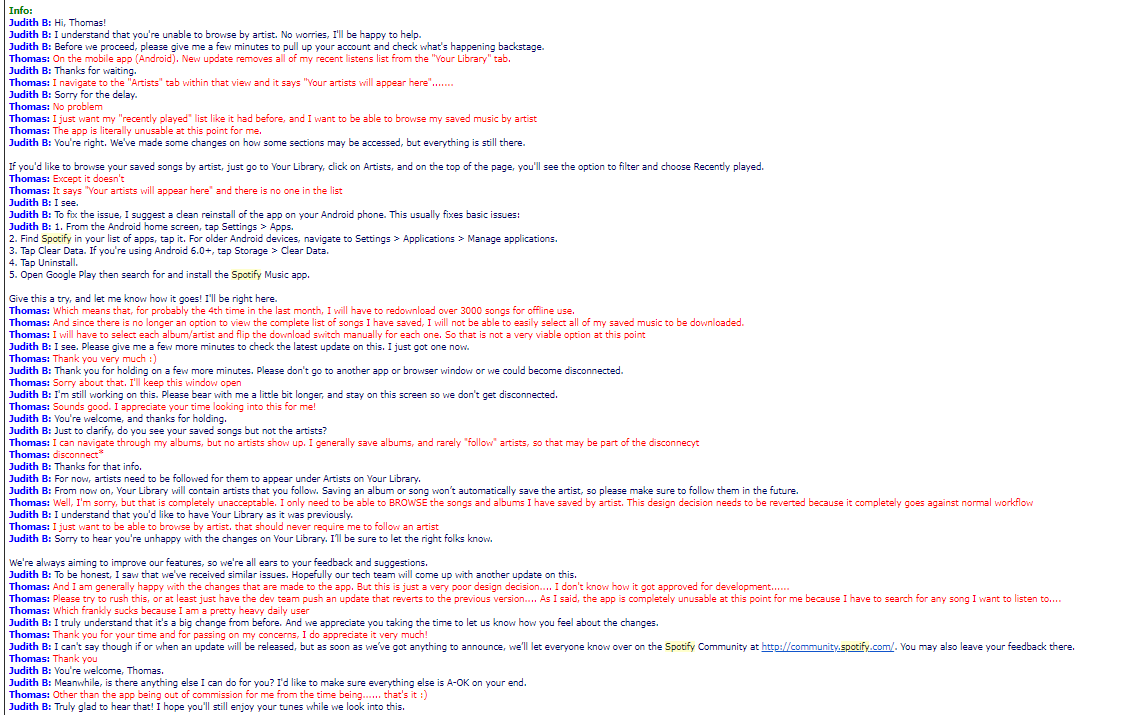 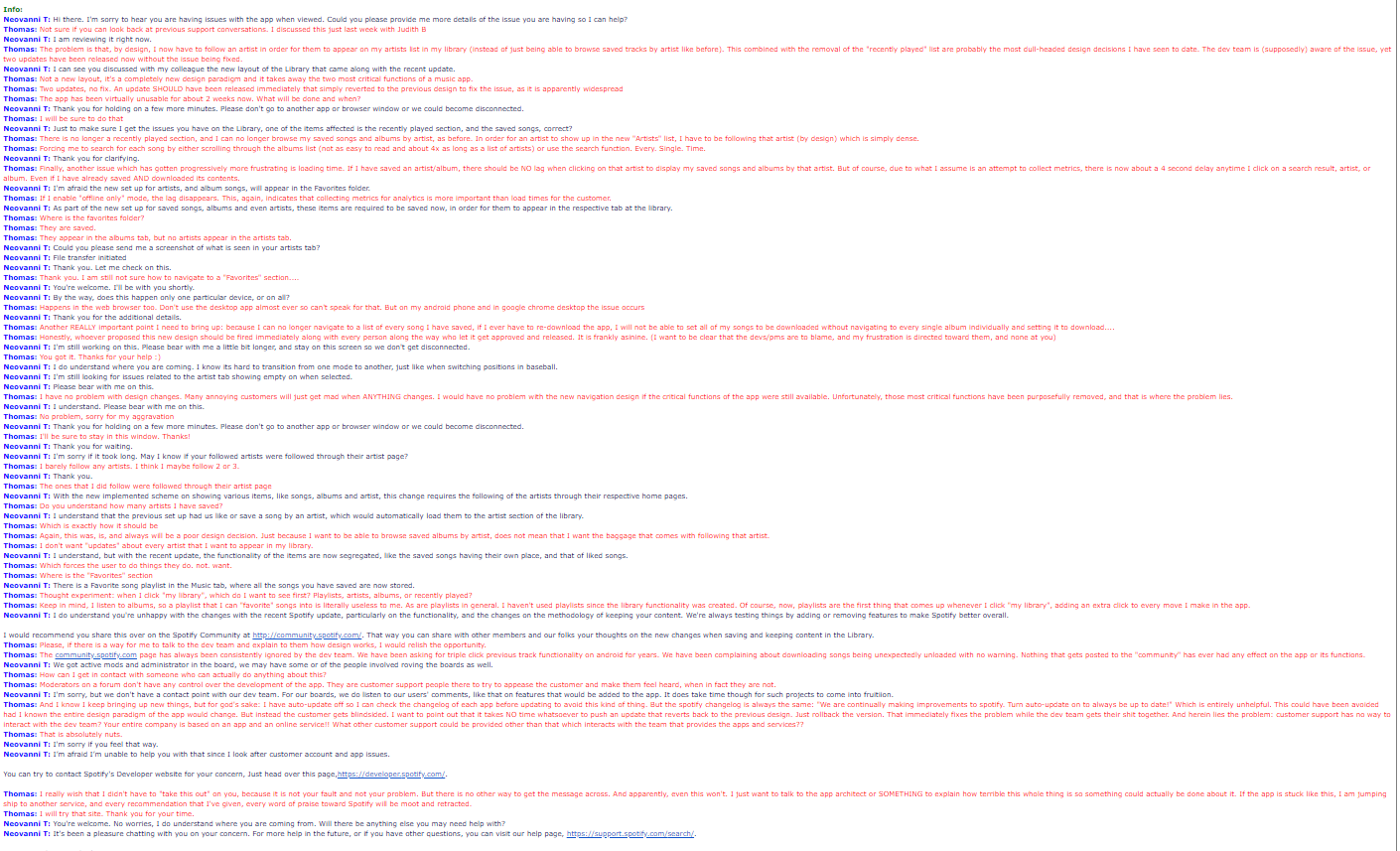 Thanks for proving my point... No deadline, no new information, no guarantees. Just empty talk.

isaumyam
Composer
Hi,
Welcome to Spotify community. I can understand your frustration.
An idea has been posted on Spotify to bring the old UI back. I will recommend you posting your findings and thoughts there. Also, do vote it. Here is the link: https://community.spotify.com/t5/Live-Ideas/Bring-Spotify-s-old-UI-back/idc-p/4705438#M172419
5 Likes

I did vote and post to your thread. Unfortunately, I won't be accepting anything as a solution (which just improves their customer support metrics) until a solution is actually provided. Sorry about that... If they fix it, your post will be accepted 🙂 thanks!

isaumyam
Composer
Hi,
I completely understand you and it is ok. I know what you are feeling as I'm also seeing the new UI on my user. But this is something that is out of our hands. That idea is the only place where the Spotify team will publicly say what they want to do. Whether they will bring back the old UI or not. So, bookmark that idea and check it's status when you can. No idea about when they will reply, but yes it really gets a lot of votes, it does bring attention to the Spotify team. Right now that idea only has 467 votes.
3 Likes