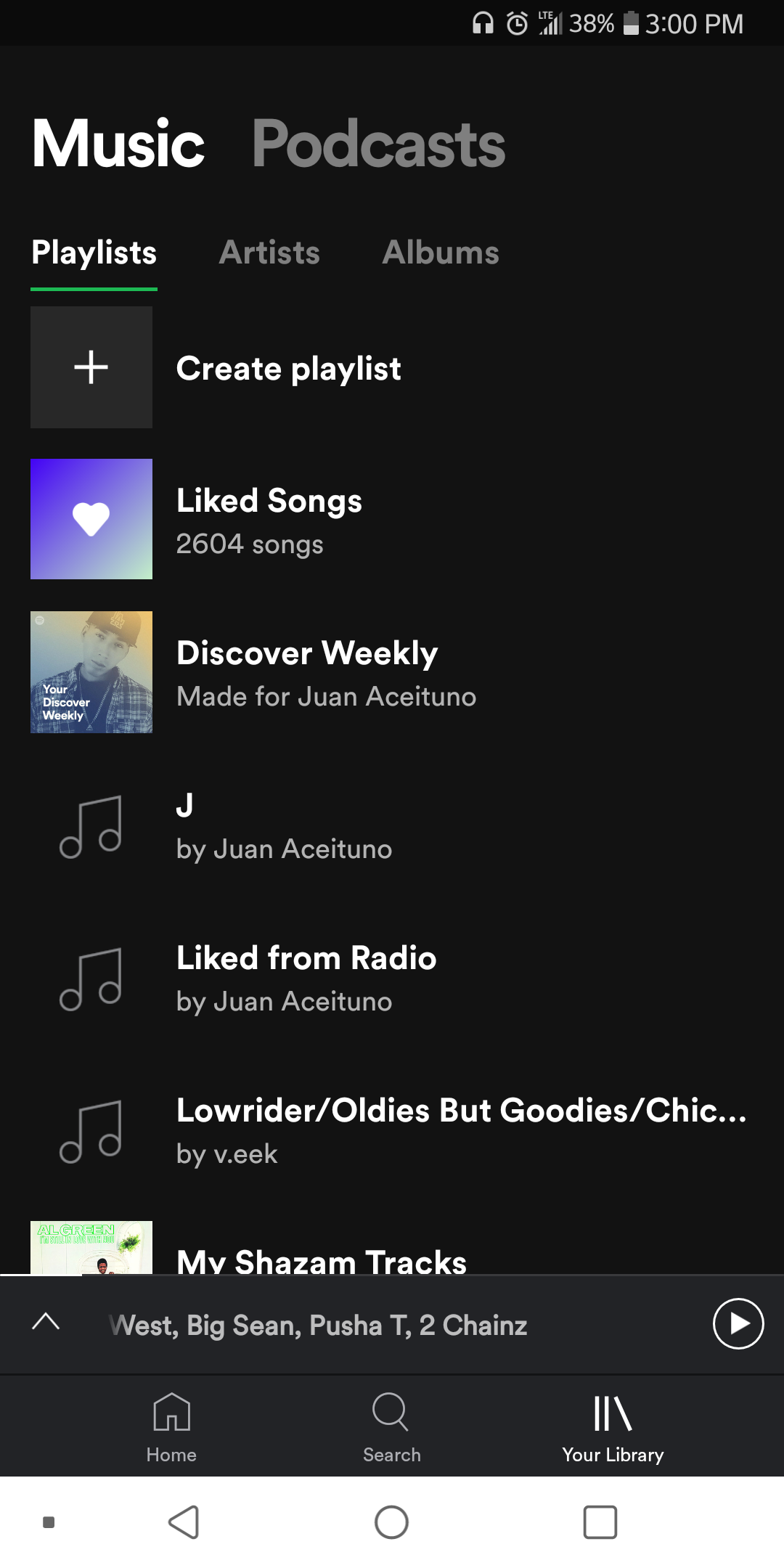 Normally what i do is go to ALL SONGS and shuffle play everything i have. I can't do that now im so upset. I dont know what to do

"All artists you're following should be now neatly in the Artist tab. You should be able to access it by tapping Your Library > Artists. Here, you can also sort the artists you see by their name or recently added."

I don't follow artists. I never have in the years that I've been using Spotify. If I like an album or song, I "save" it, which then adds the artist and respective album or song to my library.

"If you don't have a large amount of artists or albums saved, you might see Album or Artists recommendations at the bottom of the Album and Artist tabs in Your Library, like you mention. These suggestions should be based on the songs and albums you've liked. "

I have hundreds of artists in my library with an even larger amount of albums, yet it only shows me the 5 artists that I've happend to have "followed" over the years and then a completely random unalphabetized list of "recommended" artists. That doesn't equate to what you're saying. I also don't need suggestions in "My Library". I know what I want to listen to. If I want suggestions, I'll go to "Discover". I thought that was what those two sections were for. Apparently not.

So instead of the old way of having an organized list of Artists that I've added to my library, you expect to me to go through the random list of "recommended" artists or try and remember them all by memory, one by one, and "follow" each one in order to get the list that I already had before the update? Yeah, no thanks. That's ridiculous.

It seems the only two solutions are 1) wait and hope that the changes get reversed, or 2) download an older version of the app and disable updates on every platform that I have Spotify installed. I'll be doing the latter.

I agree. You idiots took away the ability to choose songs in alphabetical order. Now my liked songs are saved from newest to oldest! How the f*ck am I supposed to find one song in over 1500!? I have to painstakingly search for songs individually, which ISN’T EVEN POSSIBLE WITHOUT WI-FI! You really f*cked this up.

If you open the Play Store and then browse to Spotify, in the upper right portion of the screen there are 3 dots, tap that and there will be an option to disable auto updates.

If you open the Play Store and then browse to Spotify, in the upper right portion of the screen there are 3 dots, tap that and there will be an option to disable auto updates.

You are my hero, thanks

I usually search for the songs I want view the "Albums" page, but now half the albums with songs I've saved aren't even there anymore, while some more of them are now "recommended based on songs I like" but without my saved songs. Even though yesterday, I most definitely had songs saved from those albums. Thanks for making it easier to access songs....NOT. The way it was before was more than satisfactory.

awful update, now i can't shuffle play thru all my songs/artists?  what?

This update is an awful change to an otherwise fantastic music app! I have never had issues with spotify before. It is a fantastic music streaming service and has taken over how I primarily listen to music. To just up and change everything about how we view our libraries to get us to follow artists is just a terrible move. The whole library is disorganized and messy. I don't care who I listen to the most recently, I always use my full library and really appreciated the organization without having to follow everyone I listen to. This update was by far the worst decision Spotify has made and I would really appreciate it going back to it's original state.

and if you do not follow anyone the artist page just comes up blank.

Like many others here I created this account just post on how awful this new update is on both moblie and desktop versions.  I should not have to follow anyone if I choose.  I have the music saved to my account and downloaded  to my mobile device.  It seems like we are being forced to follow artists for ..reasons.  I could see these changes making more sense on the free version but not to the paying customers.    Maybe a little transparency as to why these changes were made are in order. Change for change sake only hurts the consumer.

I refuse to "follow" an artist, so now my artist page is literally blank. I've spent years curating my preferred discographies for each artist, which is frankly the only feature that was not negotiable for me.

I will be switching services.

I refuse to "follow" an artist, so now my artist page is literally blank. I've spent years curating my preferred discographies for each artist, which is frankly the only feature that was not negotiable for me. Like so many other people I created an account just to let Spotify know that they messed up big time. I guess keeping satisfied customers satisfied by not changing the app was too much. But let's be real, Spotify is just trying to increase their stranglehold around our necks from their "added value", because nothing in this country can ever just Be. It has to be monetized until the value is destroyed.

I will be switching services.

I have to agree with everyone else who stating their dissatisfaction with the new update.I am highly considering going to another music platform because of this.

I figured that when you click "save" that indicates that you would like this artist SAVED. Previously I had not followed any artist because why would I when SAVE means what it means? It's not like this in twitter where theartis will be posting new content all the time. Now I will need to go back and somehow remember all of my saved artists - I've had Spotify premium for over three years so this won't be easy.

It would have been nice to at least have a heads up so that I could have gone and clicked the stupid follow button on every artist before this disaster of an overhaul.

The issue we as users are facing is the absolute upheaval of the way music is sorted and stored in the app.

After the update, if I want that one song, I have a few options. I can filter the "Liked Songs" playlist for the song I want (rather tedious if I want a partial album, and even then it won't play back in the order of the album). I could go follow the artist, then have to sort through their songs to play the one I want. Or I can go like the entire album, then sort by Album would work, but it would play the entire album once I select it, not just the single song I've liked within the album.

None of these new options make sense.

What I wish Spotify would acknowledge is that there was absolutely NOTHING wrong with the former UI.

What I can't stand are these brainless higher ups that get companies fiddling just to fiddle on their **bleep**, and what we get is something like this ui.

There's not a single person that I feel could defend such a cluttered ridiculous mess of a ui from that update.

This update is utter TRASH. No one wants to favorite songs and organize based on albums or whatever. Going to “recently played,” is the most efficient and best way to listen to what I want and how I want. I am completely dissatisfied and feel this update is soooooo bad. Thinking about switching to Apple Music.

No it does not help, you’d think that you’d get customer feedback before you make an update that makes your library totally useless because you don’t have any of your recently played albums show up.      Just a bunch of suggestions that don’t change no matter what filter you chose, just put back the old format that was worth paying for, I don’t want playlists that I don’t care to listen to while I have to scroll through hundreds of albums to find what I actually want to listen to.

Plz change it back. I can't even find my music anymore, had to use youtube for the past 2-3 days to listen to music.