Under the new library I no longer have the option to just play all my songs. I have playlist, artist, and podcast. What happened to"songs"? I want to listen to all my music not just specifics. Can someone help??

If you refer to the "Liked" or "Saved" songs you have a tab called "Liked Songs" where all your songs are stored.

However, i recommend checking out this Spotify help page on getting to know the new UI.

OneByBooRock Star 19
Help others find this answer and click "Accept as Solution".
If you appreciate my answer, maybe give me a Like.
Note: I'm not a Spotify employee.
Reply
1 Like

Same here! Does that means the all songs now is called “liked songs” ? For future uPdates it would be great to receive a summary of the main changes, specially when a whole option disappears. For the first time, I thought of searching iTunes music. Just spent 30 min searching Spotify site to find out where was the “ all songs “ option !! Very disappointing!

Same as other users, you can visit the idea section of the community and implement your suggestion of getting notified there.

This way users can add their +VOTE and comment to promote your idea.

raquelmsampaio
Casual Listener
I am sorry, being advised when an existing feature is removed for something you actually pay monthly, it’s not an idea is ver simple good customer service!!

This is one big thing Spotify could improve: the UX confusion between Save and Like.

After more investigation it seems that now 'Like' and 'Save' are the same.

However there are still some missing songs.

So around 2% of the songs are not in Liked Songs. Maybe because these are songs that were pulled out of Spotify by production companies. I cannot tell.

Still, it looks like they now have merged 'Saved' and 'Liked', even if it's poorly implemented in UX:

- heart sign in iOS is a check mark on desktop

- If I play a Daily Mix, a song that was Saved but not Liked will show

- a inactive heart in desktop

I guess desktop hasn't caught up yet haha.

What gabaix has said is spot on. The new "Liked Songs" is the old "Songs" list from where you saved by clicking on a plus sign. In the past there was some confusion as we were able to heart a song and also save/add a song. Now they are one and the same. You can shuffle this list as you did before, it's just now found under playlists.

As to songs being missing like gabaix described, I have not noticed this. But I have not done any thorough testing.

Although it’s a hasstle you are really determined to shuffle all song, you will need to like all the songs and then play the “liked songs” playlist Spotify makes for you. I know this is annoying but it is a way to get it done:)

I've just recently started using spotify. Not being able to play the entire library makes this app absolute garbage, now im doubting if I should have got the paid plan. Playing all of the songs, regardless of whether you downloaded an album or saved them in a playlist is a no-brainer function and pretty much any other app has this function, just not spotify. Whoever designed it this way is a braindead I really hope you change this, as I do not want to go over thousands of songs and click like for each of them.

zoazim
Regular
Exactly this! So Spotify, Where are my songs in "NOT LIKED SONGS" ??
No wonder Spotify struggles economically, when they cant make a simple meny like this (well, they had, but removed "MY Library" Which contained ALL my songs, both "liked" and not)
ARGGGHH
Reply
1 Like

No, its not the same.

You can use this browser plugin to build a playlist with all songs from all saved or liked albums. That's pretty close to the old My Songs tab. 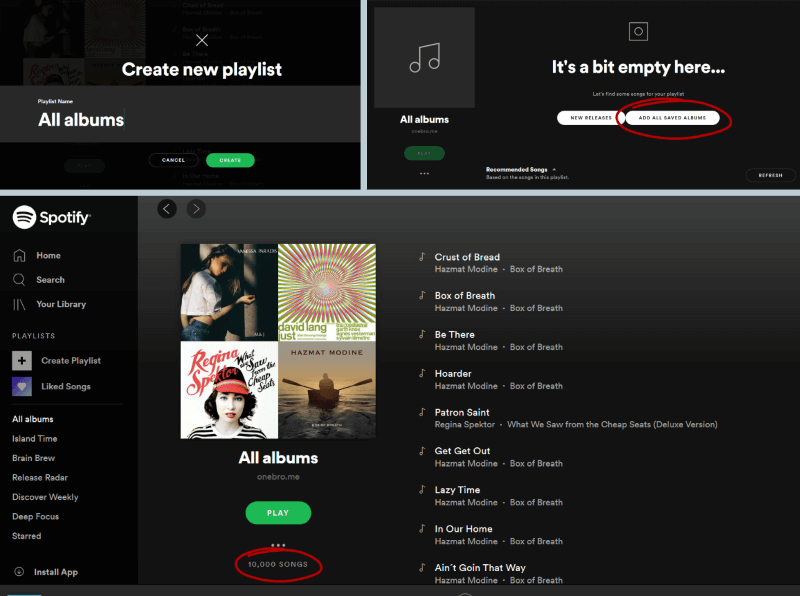 xdpugachevx
Casual Listener
You can use Chrome extension to create playlist with all artist's songs: https://chrome.google.com/webstore/detail/spotify-artists-all-songs/jdicfniianljldbajoghhnilmnghgmno
Reply
0 Likes