I'm Luisa, from Sao Paulo - Brazil and I'm having a really hard time dealing with 2 serious problems with the Brazilian custommer support. I really don't know what to do so please, I would really appreciate some help.
Long story short, I'm a Premium user since long long time ago when I was living in the US. When I moved back to Brazil, even though Spotify was not here yet, I kept using the system with my American account cause I really love it and I work with music. Once Spotify started their activities in Brazil, I instantly switch my account to Brazil and subsitute my American debit card for my Brazilian credid card, with a Brazilian billing address. Years went by, with the same account and credit card and this month I faced a problem: 2 premium months were charged in the same bill. I didn't notice at first so I paid the total amount of R$50,68. I contacted my credit card and they told me to contact you cause they had nothing to do with it. First answer I had from the Brazilian Support was that nothing was wrong and they couldn't do anything. Even though 2 months were charged and all the previous moths were paid, I wouldn't be compensated in the following month. After endless emails explaining everything over and over again and that I wouldn't just accept paying R$50,68 in one month out of the blue, they decided to offer me a treat: as I was a long time user, they could do me the favor to start charging in Brazilian Reais. That blew my mind and lead us to another bigger problem: I have been paying almost the double of the price + iof (Brazilian taxes) for all those years unnecessarily. I didn't know Spotify had the ability to charge in my currency cause my account was switch to Brazil along with my Brazilian credit card and not being charge in US dollars was never an option. I was never notified about that.

Well, I explained that to the Brazilian lady at the support and what she said was: they won't do anything about the extra month charged, so it's R$50,68 and deal with it, but for my Dollar x Reais issue, she could give me 2 premium months for free and that's it.

Seriously guys, in my currency conversion U$5,99 = around R$26,00 + taxes. I found out that the regular Premium price in Brazil it's R$14,90 and I have been paying that for years! I can't just accept being charged one month R$50,68 and then take 2 months free Premium when my account it's from Brazil, my credit card is from Brazil and I have been paying unnecessarily and unnotified almost the double for years.

I really can't deal with the Brazilian support anymore, if anyone else can help me I don't mind speaking in English.

Thank you for your time!

Hey there @luisa_mauaccad, thanks for reaching out in the community!

This is odd. Could you have maybe subscribed for Premium back then through the us version of the website? Also, if you have a case# I can escalate this from here to the right team 🙂

Hi Kate, thanks for getting back to me!

To be honest I have no idea if I was on the US or Brazilian version of the
website back then. I checked my receipts and looks like I did the country
and credit card transition in May 2014. As you can see on attach #1, in
June 2014 the payment changed from $9.99 to $5.99 and at the time I thought
that it went cheaper as an strategy for the expensive conversion that
Brazilian customers would have to deal with. From June 2014 till now I have
been paying $5.99.

The case # were I initially asked for help regarding the 2 premium months
charged in one credit card bill is:
ref:_00DD0pxIW._5005718XXAg:ref 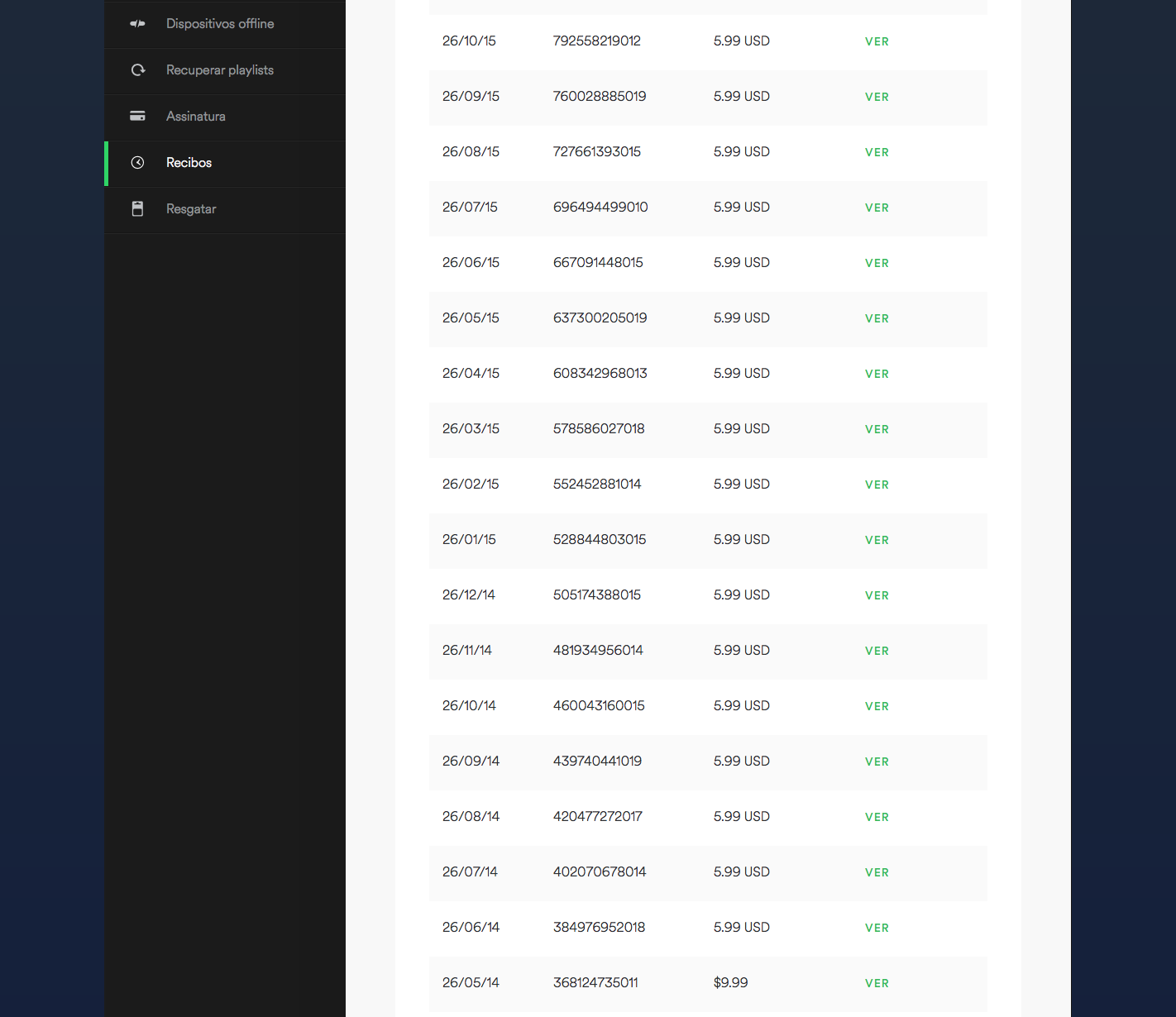 Hi Kate! @kateshere
Did you have the chance to escalate my issue to the right team? FYC the person I was talking at the Brazilian customer support emailed me this morning saying that she saw that I opened a case at the community and ask me if I wanted to move on from here instead with her. As she couldn't provide me any reasonable solution + she said that to switch to Brazilian Reais she would have to delete all my data, my answer was that I would prefer to continue at the community. I really want to clarify this before having my infos erased.
Thanks!
Best,
-Luisa

Basically, escalating means that Support gets a notification about this case, since there is not much we can do about payments in the community. We don't work for Spotify here so we can't see that kind of info. At the community we can help more about technical stuff. So yes, if Support contacted you, then the case it was escalated.

Ok. That's again so frustrating. The case were send back to the same person who couldn't give any reasonable feedback in 16 emails and has enough knowledge to ask me if a wanted to move on from the community as this was an option.
Thanks for your time, I really appreciate it. As I have everything documented, I gonna try to get assistance somewhere else then.
Best,
-Luisa