Software updates and removes RECENTLY PLAYED SONGS list and replaces it with ALBUMS only verson. No longer can you see a list of music you've played. The History optiosn only show ALBUMS. They have removed the "SONGS" list option.

After ten years of membership I transfered myh music over to APPLE and found out THEY don't have a list of songs unless you MAKE ONE. Kinda bad tbh.

ALL APPS/Platforms CONFIRMED> This feature is GONE.

If the issue occurs only on Desktop, it could be a device-related issue. As @Alex mentioned, it's a good idea to give these steps a go and run a clean reinstall. This one is more thorough than the usual one.

If the issue persists, you can also try running the app as administrator. Are there any changes?

Could you try again sharing a screenshot with us? That way we can investigate this further.

Keep us in the loop! We'll be right here if you have any questions.

Hi! First of all I'm sorry if I am asking something someone already answered somewhere, been checking threads and comments but cannot find what to do. Thing is I used to have Your Library on the left sidebar menu, with several options below such as Made for you, Recently played, etc.
Recently played is the feature I used the most, cause there I could quickly find all the albums im currently listening and play them pretty fast. Now for some reason, the menu changed and I can't see those options under Your Library anymore.

Took that pic from here:  https://community.spotify.com/t5/FAQs/How-can-I-look-at-my-listening-history-on-desktop/ta-p/1213407

But now it changed to this:

If I click Your library it opens to the right a menu that doesn't have recently played and I really can't find all that content useful at all...

Is there a way to get the old left sidebar menu back?

With the new desktop app interface, you can find your recently played content two ways; one is going to Home (left side menu) and scrolling down a bit until you find the Recently played section, or you can click on the Play Queue button

and you'll see on top of that page the tab Recently played, where you'll find all you recently played content in a more organized playlist-like view.

Hope this helps. We'll be right here in case you have any questions 🙂

I see the Play Queue button as you say, but it shows songs.... What I want is the left side of the menu like this:

because this option showed recent albumsss, not songs.. I am an album listener person... and I really miss that optionn 😞

Is it gone forever?

Now I see left menu like this, and if I click Your library it opens the content on the right as u see in this screen: 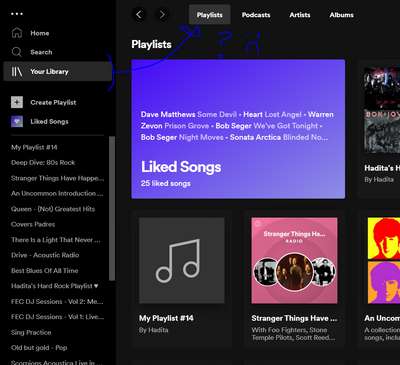 MAybe my desktop app is wrongly installed? That is the only hope I have 😞

Thanks for the screenshots @Hadita12!

We think we understand what you mean. The section you're referring to is now found in Home. Scroll down a bit and you should see the different content that you have played.

Should look similar to this:

And by the way, if you're resolution is high enough, you'll also be able to see the album played with the previous method > just go to queue and click recently played on top and it should appear as a column in the list like this:

Hope this clears things up!