i have been having problems of late with tunes resynching on my phone. it was not that big a deal but annoying if i was out and about and had to restart my phone for whatever reason. as many songs would ot be available to me until i got home.

i asked the advice of spotify cares on twitter who asked me to reinstall I was not keen to do this but was assured it would solve the problem, so I did, as per the instruction in faq's

Which is where my real problems start.

firstly, even though i had uninstalled, google play stated i had already installed it and would not allow me to do so again.

Secondly it also said i have no devices available.  I followed the instructions of what this means...i.e i had not logged in, even though i had. so i logged out and in again a few times, same problem.

Then i thought if i created anew gmail account maybe it would be available and lo and it was! Happy days i thought bit of pain having to do all this but at least I could have Spotify back on my phone.

Google play just says no devices available, even though my phone is compatible.

The redesigned Play is a nightmare. Have you tried from your mobile? Open the play app, menu my apps, all tab. Spotify should be listed there and selecting it should let you redownload.

hi, I can't even dload the play app for the same reason. it's the same on my phone and on my laptop

You need to log into google play with the same credentials you used when you originally set up your android devices. Creating a new google account means that the devices are not linked. Log into Play with your correct credentials and just check that their device manager (click the settings icon) shows your devices correctly.

Yeah, thats what I did first but it says no devices (depsite me logging in) and won't allow me to install. As the button says "installed".

If I click on that message it reiterates the "no devices" and directs me to log in to the play app store, which I have done ad nauseum.

Have you tried Google's support service. They can probably get you sorted pretty quickly through their live chat.

There haven't been and are currently still no live chat people available.

Thanks again, tour time out to help is much appreciated!

After 40 minutes on the phone with google play people,  (both of which very helpful) I had to restore my phone to factory settings in order to remove my  google account and then sign back into it.

This time It recognized my device as existing and I was able to reinstall spotify and am now all synched up. I get the impression my orignal problem still remains but at this point I don't much care. Just happy to have spotify back on my phone.

Anyway thanks for your time and help, it stopped me from pulling  ALL my hair out!

I'm glad your google account works correctly now, that must have been a nightmare. Once you've got your breath back, pop over to the android section and post details of the issues you're having and we'll see if we can't work something out 🙂

Hey there, would you mind posting a screenshot of that 'no devices available' message from Google Play?

For common support questions, see support.spotify.com.
To judge my musical taste, check out my last.fm. 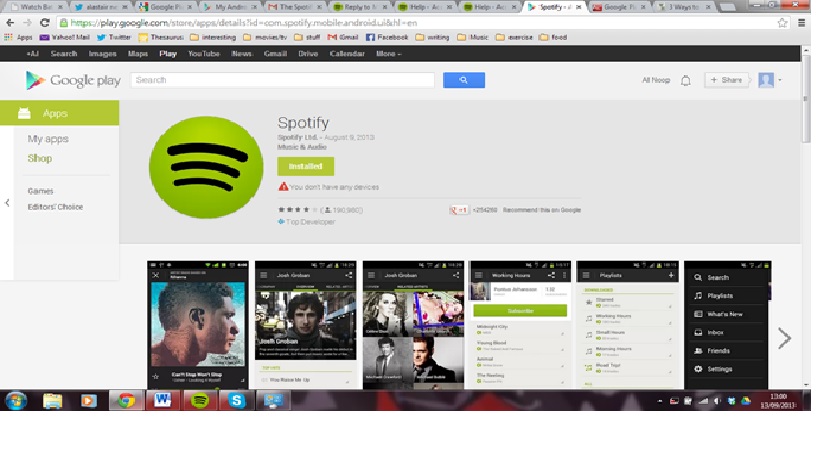