I too got a sudden wave of those emails, about the same time this started for alyssa. Nothing ever seemed to come of it, however I noticed one day that the same one song kept playing/being added to my queue. ( https://open.spotify.com/track/3GgzHJT8pUPlcqWViYxX68?si=jv59re-SQ9ahxQW493dwTw )

It's not a popular or interesting song, and I've never listened to it before, nor is it related to anything I have listened to. Nearly every time it appeared, my volume would cut right out, but checking devices showed I was still playing it from my PC - so if someone else was on my account, they were only trying to get me to play this song without noticing? They clearly weren't doing it to listen for themselves.

Obviously seeing this discomforted me so I immediately followed the steps provided above (changed password, forced logouts, revoked all 3rd party access - even ones I trusted) and had no more issues until tonight, when the song suddenly played again and my volume cut out. It happened 3 times within about 20 minutes.

I've had no more emails about suspicious logins, and I doubt anyone could have cracked a new password so quickly, so what's going on? Has someone breached Spotify's network? What can we do for extra security when changing passwords etc clearly isn't enough? Will we ever get 2FA?

I'd also like to know why this certain song. Is someone hacking accounts for artificial plays to make money? What can be done about that?

I also got the same notification of someone logging in from Thailand. It wasn't a phishing scam either. All hyperlinks pointed to spotify.com 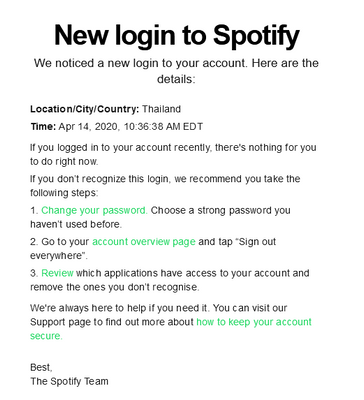 I am having the same issues and have had an email (sometimes 2) almost every day to say that there has been a login to my account from another country. The latest one was in less than  hour from when I changed the password to a strong generated password. I have logged out of all devices and changed passwords and so have done everything suggested. The account does not appear to have been used looking at recently played songs but j have had enough. What more can I do?  This only started about 2 weeks ago

I'm having the exact same problem.

Reset the password as suggested on the guide but no avail. Same problem still persist.

Changed password for the 3rd time in a week today - will see.

I had the same issue!! I simply changed my password to something different and I have not had the problem since.

user-removed
Not applicable
I am having exactly the same followed all steps in support but still same problem. I have used passwords that I am certain no one could guess and an hour later had a log on attempt in Russia. Surely Spotify is having some problems with accounts that they need to look into? I tried to complete a contact form but the link is disabled does anyone have any other suggestions for how to resolve? I am considering closing my account.
Reply
0 Likes
Highlighted

I continue to receive emails from Spotify to say there is an unidentified login and this has only started happening in the last few weeks. Before then I had no trouble whatsoever. How do I get an individual at Spotify to look at my account, and those of others, who have commented that this is happening , despite setting strong passwords. As someone else has said, I am considering closing my account as this is unacceptable

I'm having the exact same problem.

Reset the password as suggested on the guide but no avail. Same problem still persist.

Changed password for the 3rd time in a week today - will see.

Still getting the emails - the number has decreased to twice per day (two on Sunday, two on Monday) - I'm wondering if the problem is linked to the way alerts are triggered which are showing up attempts to login rather than actual logins.

Also - The password was reset via a separate computer & the account is linked to a GMAIL email address which has 2FA so neither are compromised.

If you really have trouble with this change youre email.

after you did that verify youre email(you did get a mail from spotify).

And last but not least log out every where (account settings on spotify pc and then scroll down).

normally you have the ip adresses either in that mails.

from here of ther are 2 options.

option 2: go to the cops. Then give the cops theire ip adresses and they will charge the ones who logged in.