Thanks for your reports.

It appears that the the app is continuing to run rather than pause when any headphones or speakers are disconnected for our Android users. This may be causing a spike in battery usage.

If you're having the same issue, make sure to click +VOTE to stay updated.

You can also try these to see if that helps:

KaterinaModerator
Help others find this answer and click "Accept as Solution".
If you appreciate my answer, maybe give me a Like.
"Kindness is the language which the deaf can hear and the blind can see." - Mark Twain
Labels:
7 people had this problem.
Reply
43 Likes
28 Replies

I think Spotify is using the play services, for chromecast perhaps, and this is just dumb if there is no option to disable.

Just got Premium for Family and I am seriously considering stopping the subscription and moving to something else..

We really appreciate your patience so far.

After running tests, our tech teams were unable to reproduce this. This could be due to individual device setups with Bluetooth devices and connections.

However, we're continuously working on improving the app, so we'd recommend making sure that you've enabled automatic updates on your device.

If Spotify introduces a feature to not poll for any connected or available devices, I believe it might fix  the problem.. but it seems like you have completely abandoned this thread.

Having the same issue on my brand new Pixel3a. All apps up to date. Tried clearing cache and data.

I realized the issue when on airplane mode and listening to a downloaded playlist on a plane, so I suspect Spotify/Google services are causing the problem.

Thanks for letting us know these details.

There's a newer version of the app available. Just to confirm, could you let us know if the issue persists for your Samsung device after updating to the latest version? If you haven't already, we'd also recommend removing any devices listed here and trying a clean reinstall of the app.

We'll be keeping an eye out of your reply 🙂

Wiped and reinstalled numerous times, nothing is helping. Interstingly on my wife's s8+ this issue doesn't appear...

Having the same problem on my OnePlus 6T McLaren edition. Not just a pixel issue. 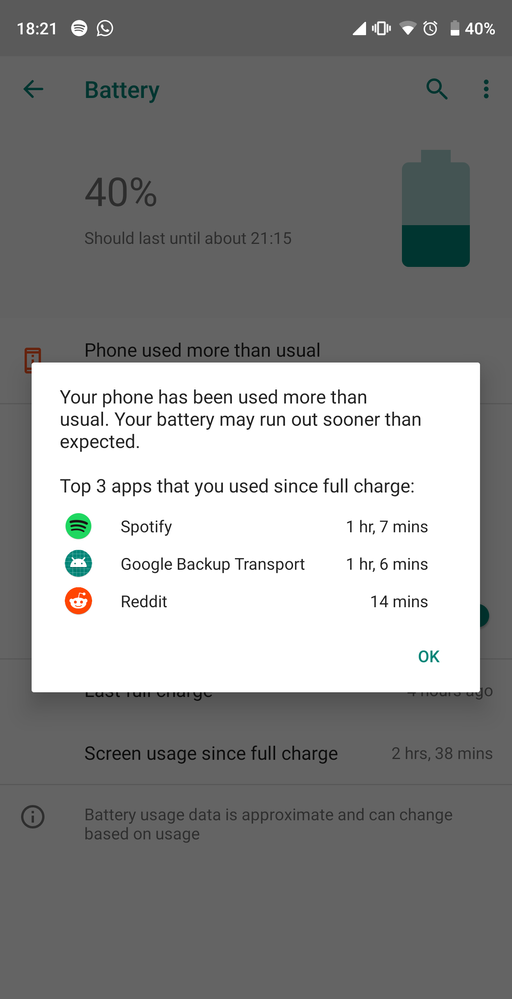 Please fix it, there is no way spotify needs to ping google backup transport

Thanks for the update. I have a Google Pixel 2 running latest software update (Android 9.0 Pie). Spotify version is 8.4.74.463 armV7 (the latest update available).

Here is my battery usage today. As you can see, the Spotify usage isn't *too* bad on it's own but it is triggering Google Play Services all the time it is on, effectively doubling the battery usage. There is no other app that does this and no valid reason I can think of for it to need to do this. For comparison purposes, on days where I don't use Spotify, my Google Play Services usage never goes above 1-2%.

More than happy to provide further information as required. 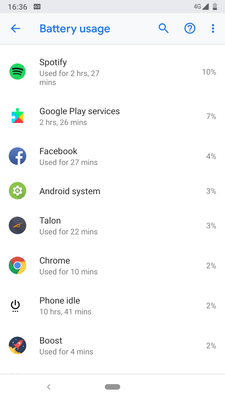 The in-line controls do not work properly, as reported a long time ago by many users in various forums I've found. It's still not fixed, how? why?

To clarify, the controls work on all other apps. And a single button press works for play/pause. Double-press for next song or triple-press, however, does not work.

It worked on my previous Android device on 8.0 Android just fine.

I can get it to work, if I turn the battery optimization off, but after a while, even after that it stops working, and disabling and enabling the setting did not work anymore.

Another workaorund is to ask Google Assistant to play next song, and then suddenly the controls work until the end of the session.

We've seen some of you report that you're also seeing a battery usage spike. We've passed this on to the right folks and they're looking into this.

Further, please make sure you are running the most recent version and let us know if the issue still persists.

If it does, make sure to click the +VOTE button and include the following in a comment:

We'll let you know as soon as we have any updates.

Since upgrading to Android Pie I have had excessive battery drain from Spotify. At the same time, whenever Spotify is active, it appears as though it is constantly pinging Google Play Services as the usage (under battery stats) for Google Play Services is *exactly* the same amount of time as Spotify (plus maybe one or two minutes extra for use prior to using Spotify).

I have deleted Spotify cache, fully deleted and reinstalled Spotify, checked settings and even done a factory reset of my device and the problem still remains.

Any advice or support would be appreciated. Happy to provide any screenshots or further info if required to get this resolved.

Same issue on a Pixel 2XL running the latest android Pie. Not only does spotify ping google play services but it also uses the linear acceleration sensor all the time when the app is running!. This can be easily checked with betterbatterystats on a rooted device.

Sort the app or keep losing potential premium users because the leftover spaghetti code is carried throughout the updates!

Google Play Services remains dormant until Spotify is used at which point it is in constant use.

Absolutely no change at all.

I am also running a Pixel 2 with Android 9, and my symptoms are just like those of the topic-starter. I have also deleted the app, cleared out the cache, and reinstalled the app, but the problem still remains.

Thanks for your patience.

We can see that there's a new version of the app available. Could you make sure to update the app and let us know if the issue persists?

We'll be keeping an eye for your replies! 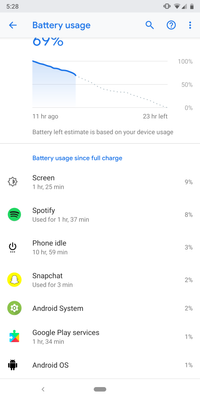 Thanks for raising this issue with us on the Community.

We have reported this to our tech team and they are looking into it.

In the meantime, could you please leave the following information:

I myself have an Apple product, so I don't know a whole lot about Pixel phones, but I'm happy to help!

This seems like a common problem with Pixels. Maybe it's just something with Google phones?

You could also try closing the app whenever you're not using it , and use of data might cause the app to drain extra battery ; do you have premium?

Also, perhaps your phone is in need of a new inner battery? It might be unlikely since the Pixel 2 is a relatively new model, but there's always a chance.

Again, these are just suggestions to help you save power. I hope they're helpful!

Is there any way of getting this escalated or to get a response from Spotify? This is obviously a problem given the number of people experiencing issues. There is NO reason I can think of for Spotify needing to ping Google Play Services constantly whilst it is in use. No other app does this and there is no need to do it.

Seriously considering leaving Spotify over this as battery drain like this is a real deal breaker.