Okey, I have been having different problems with my app since the last update (the last 8-10 days or something). I have checked Google Play, and there are many others with the same problems as me.

I have tried to log off, log in (not using facebook), rolling back and using older versions of the app, but with no luck. I havent checked for more than problem 1 when i have been doing this. I have tried reinstalling, restarting and all other things that you should try before posting any bug report.

1. The app no longer downloads tracks/playlist for offline mode automatically. You have to play them to get them downloaded. (this started last night, and have not happend before) The download meter gets stuck, and only by setting the app to offline mode it will disappear, and you (maybe) get 1 track downloaded when setting it back to online, but then again it is stuck.

2. The search function only returns hits from downloaded section even when im online. This have happend randomly (both on wifi and mobile) but it mainly does not work as it should. I can play tracks from playlists that are not downloaded, but not search for new tracks. The artist and album search options are grayed out when clicking a track.

3. The app starts to play the last played song after ending a call. This has only happened when the app is in the background.

5. When disconnecting my bluetooth headset, the music starts to play on my phone speakers instead of pausing as it has used to do.

6. The music pauses randomly, and you have to press play to get it going again. Happens with offline and online (not downloaded) tracks.

All these problems makes me consider to stop my subscription, but its by far problems 1-3 that's real dealbreakers. I have been using premium since 2010 and have been very satisfied until now.

Could you let us know the exact Spotify version you're using? Also, we'd recommend trying to log in to a friend's or family member's account to check if you have the same issue.

Just to check, did you follow the exact steps athttps://support.spotify.com/article/reinstallation-of-spotify/ to reinstall the app?

I have tried to write a longer reply, but i constantly get an error when trying to post it, so here is the short one.

I don't know if these problems have persisted over more than one version (got auto-update on) but the version im using right now is 8.4.63.584. I cant say that i have noticed that spotify have been this unstable for more than 10-14 days. Anyways before i started writing this reply I saw that i have an update pending. Maybe it will resolve some of these issues. I'll check in after using it for a while 😉

By the way, I could not find the instructions on how to do a clean reinstall from your link, just a 3 step path with no such ending as "how to reinstall"

I'm having some of these problems, plus the issue that i can't set the download folder to my SD card. The storage option isn't showing the option to make this change.

Anyway, my songs still on my SD card, but i can't listen to them without WiFi/Mobile data, and that's annoying me, because i bought the premium version with this prupose.

I too am having trouble when I go to search for new music. It's only giving me downloaded songs as results. Im am running version 8.4.64.555 armv7. Does anyone have or know a fix? I am running Spotify on my Galaxy S8 Plus

Been using version 8.4.64.555 armv7 since wednsday and issue nr 1 still persists for me. Spotify has tired to download 16 tracks forever right now, and as far as i can see i got green marks on all my downloaded playlists. Take a look at the picture. And those tracks are stuck only when using WiFi. If I check "Download using cellular", the 16 track notification disappear and any newly added undownloaded track will download. Connecting with WiFi again, and the notification comes back. Tested it before posting.

I shall use this version a bit more, but it seems more stable on my phone than the version i originally posted for. Haven't noticed random pauses nor playing music after calls. Artwork and title lag seems more normal too. 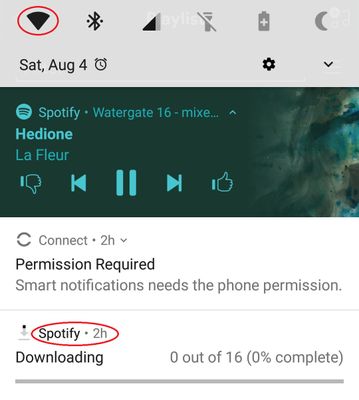 Thanks for letting us know!

The best option would be to reinstall the app by following the steps at https://support.spotify.com/article/reinstallation-of-spotify/. Could you guys let us know if it helps you out?