Over 8 hours usage including playing music and streaming over wifi  seem pretty good to me for the Nexus 4 (running android 4.3 I assume). Why do you think this is excessive? Try playing music for the same period of time using the built in music player for a rough comparison.

Not sure if this is the same problem exactly but since getting the latest version I have been having problems with Spotify and battery time. Each time I have been using Spotify in offline mode to play previously downloaded music, and during that time battery life has been ok.

However, once I have been done with Spotify I have paused the music then terminated the application (removed it from the list of running apps) to make sure it doesnt waste battery. Only problem is the effect has been the opposite. Several times the battery has been draining FASTER after stopping Spotify and checking the battery list shows Spotify as the biggest battery thief, closely followed by media server. I am guessing that something doesnt get stopped properly when I terminate the application, making something related to Spotifys access to the media of the device go crazy and start draining the battery.

This morning I woke up late simply because my phone, which was 70% charged when I went to bed, had DIED during the night. Once again, looking at the battery stats, Spotify was the biggest culprit, followed by the media server and looking at the battery graph and counting hours I can see that battery really started draining faster after I had shut down Spotify just before going to bed.

Can you please try to fix this? I like the app, but I honestly dont want to be forced to charge my phone "just in case" every single night simply because I cannot trust it after Spotify has been started. Perhaps I will start rebooting the phone every time after I use Spotify to avoid this problem but that also feels really lame.

What mobile device and android version are you using? Could you try reinstalling spotify to see if it helps.

I am using 4.2.1 on Google Nexus S jakjuxw (still waiting for a newer version to become available since my device is not updated by Google... -_- Meaningless to have a Nexus when it doesnt receive updates... ) and Spotify is 0.7.2.402-g40e8dcb4.

If I uninstall Spotify, I guess it is going to delete my downloaded music? I have 4.4GB of offline music right now and would rather not be forced to wait for it again... Maybe I can do it during the weekend...

Yes you will lose all your offline music but what you're describing is unusual enough to give it a try. PLease let me know how it works out for you after the weekend 🙂

since the weekend I also use Spotify on my S4 mini. But the battery gets drained on my phone faster than normal.

On my phone the battery application shows Spotify and media server as the biggest energy consumer, like others already descriped.

So I would be very pleased if there is a fix for that problem.

Sure, I will report back... Not looking forward to re-downloading all the music though :S

I too run into this problem, I'm a tech n00b so dont ask be to analyze stuff but I can confirm that my battery drain graphic corresponds with the ones posted earlier it even becomes so bad that it drains faster then charging :S. I use a galaxy s2. I'll try to reinstall spotify though.

also as a tech n00b I did restart my phone first 😉

Got the issue on my stock Google/LG Nexus 5: Spotify consumes up to 50% of battery per day and beats the display and OS by far (see screenshot). This happens also while spotify is not used actively (i.e. no music playing). Also I mostly listen to downloaded playlists and the data rate seems normal, so it can not be linked to excessive download. The error can be worked around by restarting the phone, but only sometimes, and will occur randomly. 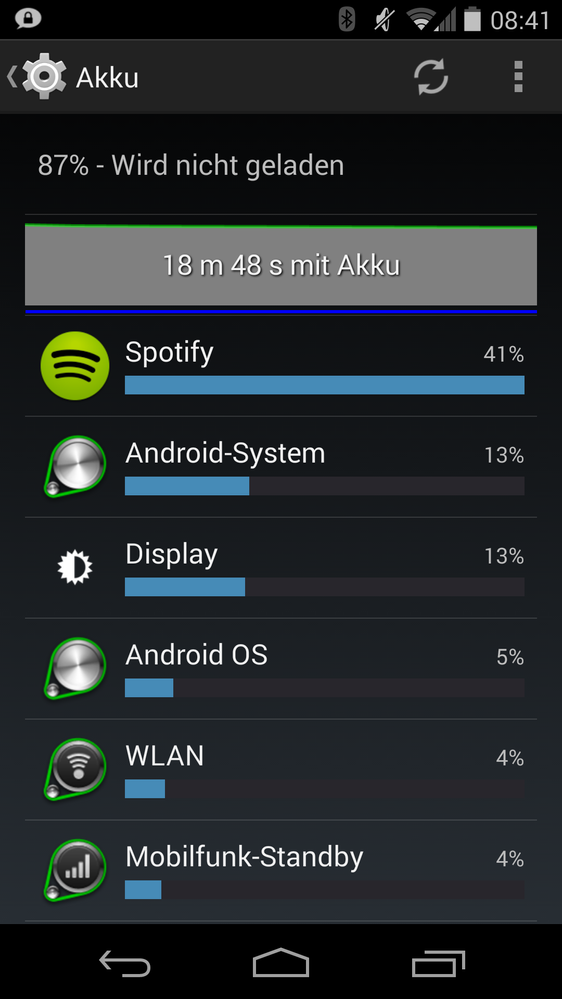 Please fix this, because it ruins the battery stats of my otherwise so formidable Nexus, and I don't want to do without music..

same here. I suspect it's an issue related to kitkat. with JB my batterylife was incredibly long, now spotify is draining it like crazy. but like the others said, not always, sometimes I can listen to music for hours and the battery is being drained reasonably, sometimes spotify leeches power without playing music at all (phone is in sleep mode).

lol, best part about that massive battery drain: battery is even being drained while charging! 😄

had to uninstall spotify for now, hope to verify that issue was caused by the app. but hated to do it, have premium membership, but whats it worth without being able to use the app? 😕

Hmmm....bought the Sony NWZ-F886 as I thought that would work out great with Spotify Premium.

I'm in shock about the drainage by Spotify. What is going on here?????? 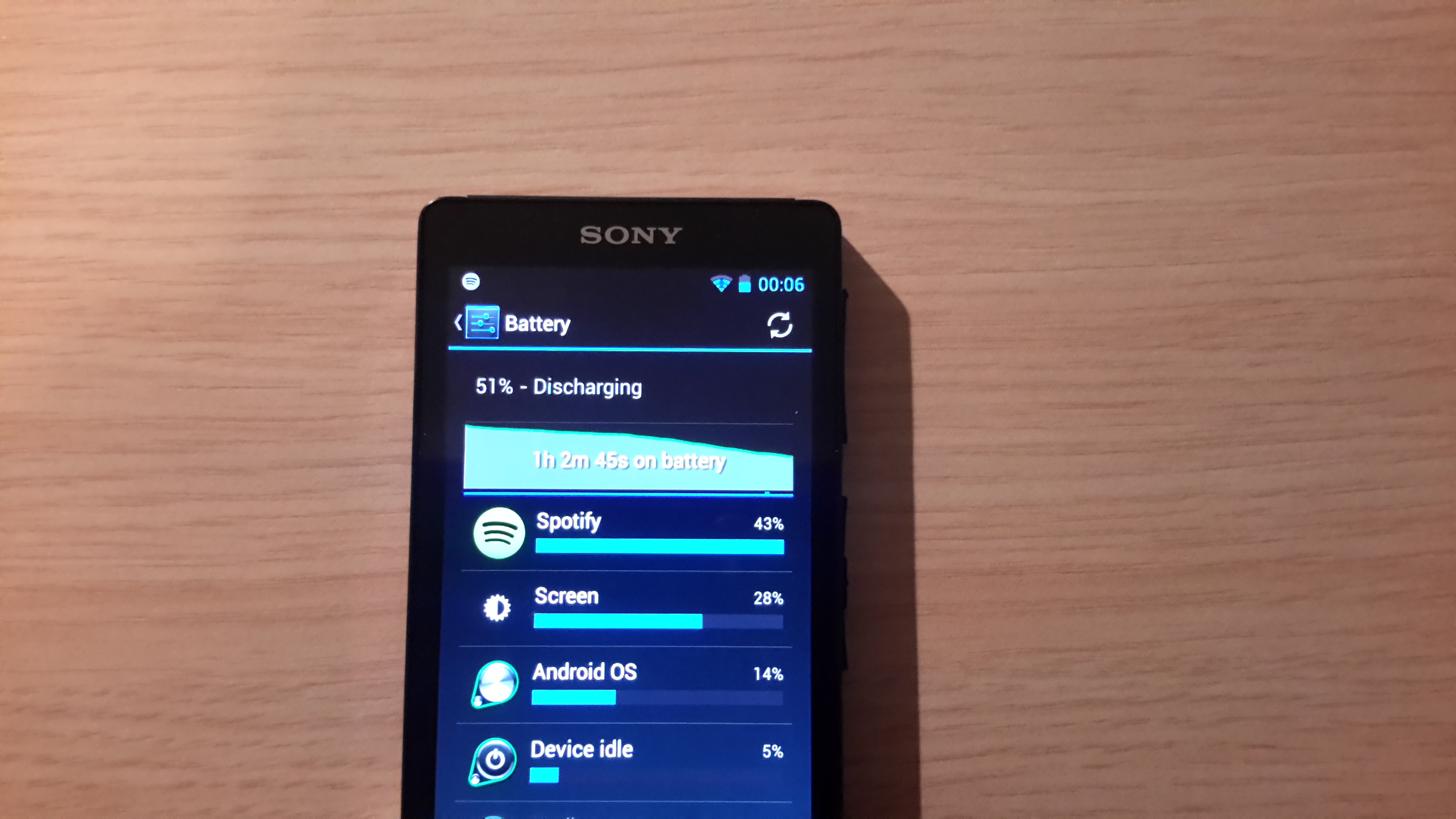 Don't forget: Premium users have to be on line to listen to music off line.
Reply
0 Likes

Peter__
Community Legend
Are you streaming or using offline playlists?

Was building up the off line playlists and listening at same time.

So I can understand it;s a bit more work (downloading, encrypting, decrypting, playing all at same time) but stil....


Don't forget: Premium users have to be on line to listen to music off line.
Reply
0 Likes

Peter__
Community Legend
I just wonder how big the battery in those devices actually is, 28% screen in 1 hour is pretty huge too.

Not a big batttery, but then again it is intended for listening and not watching.

Watching video the battery will last for about 4 hours (according to reviews). Music about 22 hours.

Have to see later what happens if I only play music downloaded from spotify on device. Then you change the playlist here and there.

And off course wifi, bluetooth etc. switch off.

Today in the morning I just played downloaded songs. No WiFi, Blue-tooth...just select playlists, let the screen go into sleepmode.

Phew....that is a different story.

Have to compare it later with MP3s as I expect they might need less CPU for playing.

Good news is. As a music player the walkman seems to work ok with Spotify. As long as you have a dieselgenerator attached when downloading lots fo playlists :).


Don't forget: Premium users have to be on line to listen to music off line.
Reply
0 Likes

I've had the same problem as you on my SGS2 running the latsest slimrom weekly. It works well most of the time but sometimes it kicks into uberdrain and empties my battery in a couple of hours. It seems to be somewhat related to some tracks not playbacking correctly and hanging the player, but also on random

I'm mainly listening to downloaded playlists that concists of both offline and online tracks.

I used to be able to listen to downloaded playlists for 8 hours and still have a few hours' worth of juice. Lately though, I have maybe 2 hours before I need to recharge. It's annoying! I believe this started after the second-to-latest update, the one that changed how Spotify ducks sound for notifications. Another fiasco, but that's for another thread...
Reply
0 Likes

** Update: actually the recent (early May update) seems to have fixed things (possibly because I disable all the notifications). Loving the beautiful new look. **

Also seeing a lot more battery usage on Nexus 5; it might not just be Spotify but my phone has seen ridiculous battery drain recently (the battery usage info attributes a lot to Spotify).

Spotify has gone from being reported as single digit percentage usage to double digit; and my phone is now struggling to last a full day. Obviously my use of Spotify has varied a lot making it hard to guage exactly what is going on.

I'm just having the same issue, spotify draining about 41%  of battery. And it seems that it continues draining battery although  I've stopped it from working.
I'm not streaming but listening offline mode.

I only recently installed Spotify on a Samsung Galaxy S4 mini, seemed OK at first, just streaming music from my wifi network but after attempting to download music to play in offline mode everything started to go horribly wrong one battery just seemed to get fried and wouldn't accept a charge anymore. Buying a replacement battery didn't seem to result in any improvement - battery drained within a few hours. It was only after finding instructions on one of the android sites on how to reboot into safe mode and clear the cache etc. that the phone held a charge again, (in fact I discovered that if I stopped most of the stuff that made it a smart phone it lasted ages). I've now reinstalled Spotify and am going to attempt downloading a playlist for offline use again. I'll let you know if I need another new battery 🙂

I did notice that last time that the nedia server seemed to consume the majority of battery power. I'll see if I get the same results again.