Its stupid to pay for the Service if it doesn't work...

PhilippR
Casual Listener
Hi, same problem on Cyanogen mod 11 here (version like the previous poster).
My battery drains excessively no matter if I actually run Spotify listening to music or have it stopped and my phone in stand by mode.
I am always listening to offline music (downloaded) from the SD card where I have still more than 10Gb of free space.
Furthermore it should be noted that sometimes the playback of offline music simply stops after some random song and the app becomes unresponsive. Then only a reboot of the phone could persuade Spotify to work again.
Since Spotify only makes sense to me when I can listen to offline music, this is a show stopper for me.
1 Like

I have this issue right now. The drain is so immense that it eats my tablet.

Wanna take a wild guess about when Spotify is running and not? I'll give you a hint.

As a paying customer I feel a bit let down and agitated. Why pay for a service I can't use to the fullest.

It doesn't matter if it's the foreground app or as a background service, neither does it matter if I am online or in offline mode. 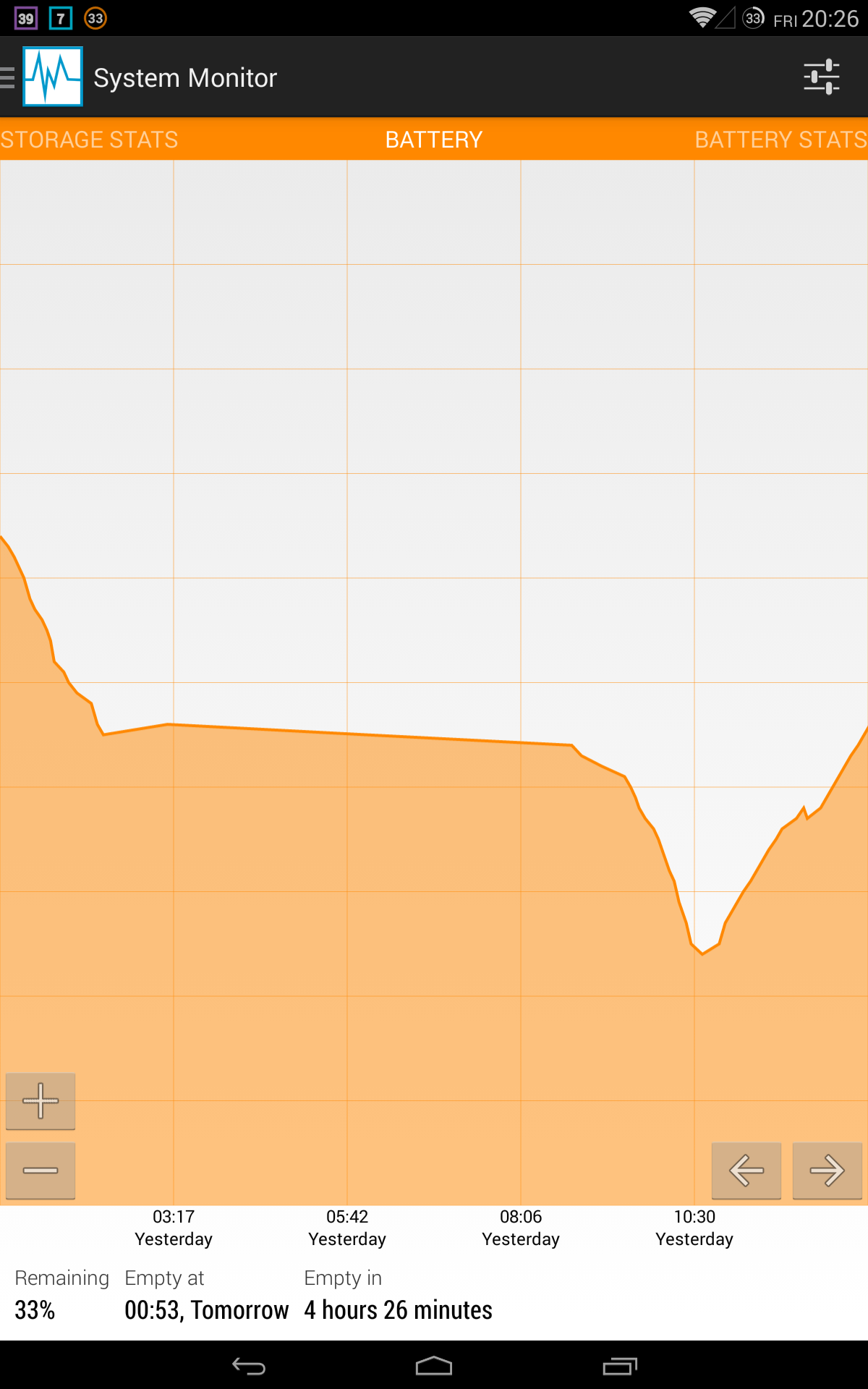 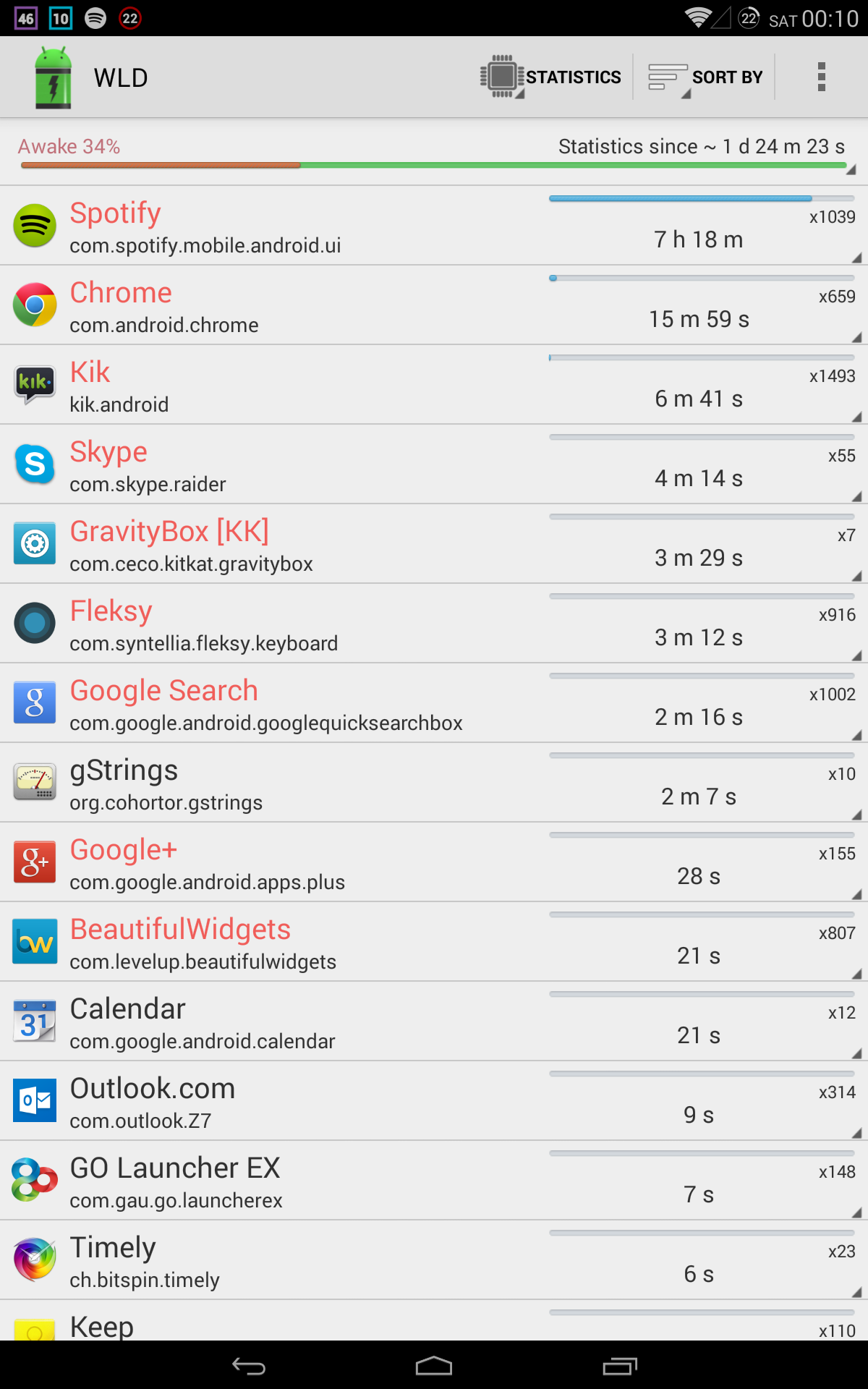 Peter__
Community Legend
I can see you haven't updated to the new Spotify app yet (now called Spotify Music in the play store). Might be worth updating and see if that makes any difference?

Jaguwar
Music Fan
The drain issue seems to have been fixed at least one update ago. Now running 1.1.0.113 and Spotify is no longer the biggest drain on my phone. Messenger (FB) is!

Make sure you're updated.
0 Likes

Hi, the drain issue is definitely NOT fixed! Today, using the latest version of Spotify Music, I had the same behavior I already described in my previous.
Yesterday I installed Spotify again after reading the latest post here. I again downloaded my favorite music for offline usage and started listening to it this morning. After one hour or so the playback stopped after some random song and when I tried to restart the song or start another one, the app became unresponsive. So I shut it down using the app manager and didn't touch the phone for about one hour, doing nothing with it actively. However during the following hour, Spotify sucked my battery from over 50% down to 2%. Within ONE hour! In the end Spotify had 60% battery usage although I had only listened for about one hour.
This is not acceptable and I will not extend my premium account unless this is fixed. 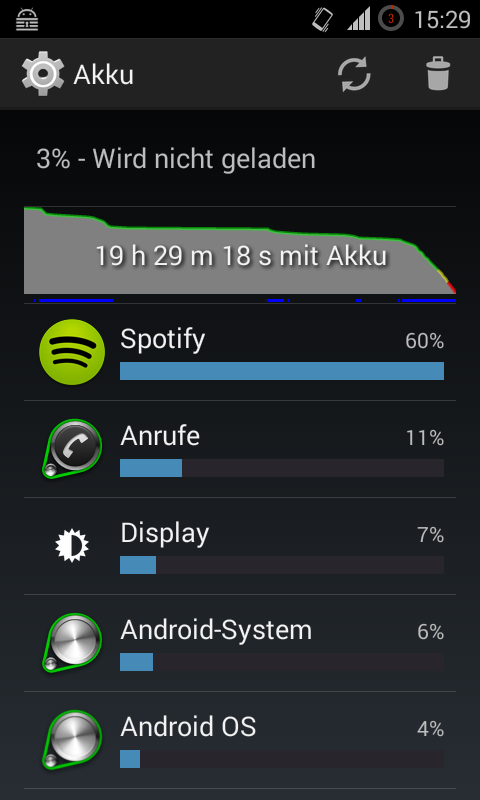 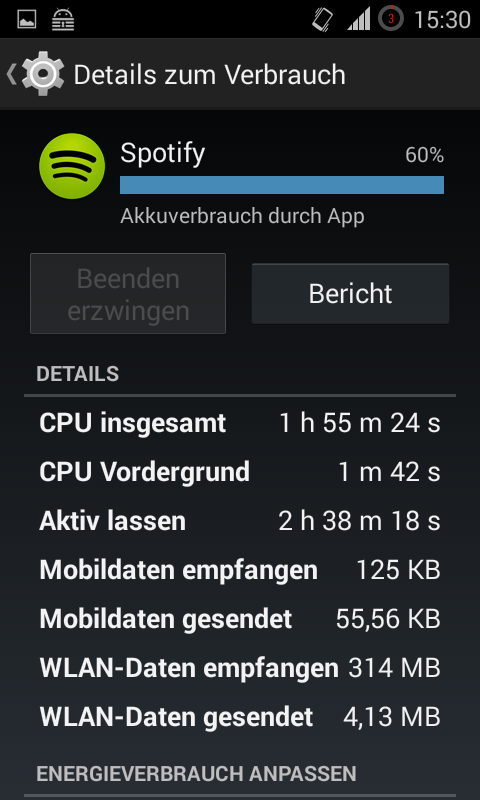 yeah i also have tied the newest version but still the same problem!!

i cannot understand spotify...this problem must be fixed soon or im out too!

and it would be nice if the support here could help a bit!

Diftraku
Casual Listener
I have the same issues on my Samsung Galaxy S2 running Android 4.4.2 (CM11-20140601-NIGHTLY).
Using the newest Spotify Music (1.1.0.113), first run after reboot, the app works just as you'd think (playing radio) but, removing the headphones or otherwise stopping/pausing the music seems to make it go boom.
Once you try to restart the music by unpausing, it'll either stay paused or the player will only show "Loading" or nothing at all. Killing the app restores some functionality but the player may or may not work, most of the time it doesn't.
This leads to absurd battery drain as the phone is forced to stay awake. If the app crashes, this leads to a soft restart, during which the battery level can drop as much as 20-30% in a time of 10 minutes and a steady 30-40% drain over the next hour.

Rebooting the phone and not touching the app with a stick is the only safe option to save even remotely some battery.
0 Likes

Updating it did nothing about it. Except clean out all my music. Thanks Spotify. I'm stuck in a psyche ward and I have no internet beside the mobile and I can't really really re-download it.

So besides **bleep**ing me over in the battery drain you also **bleep**ed me over by deleting all my music. Maybe I should just stop paying.

I much don't like the reason for it either, millions of users punished for one persons action.

Sure, you can call it whatever you want, but my guess is that the user did something he shouldn't have been doing in the first place.

Still losing more than 15% an hour.

To put that into perspective, that's about 1% every 3-4 minutes.

This error should be fixed. Paying for spotify account is of no use if I can't listen to it on my phone.

My battery is killed in few hours (usually lasts more days) and phone is hot like hell after installing spotify.

I really like spotify and tried to give it time but because there is no progress, I have cancelled my account and am switching to competion until this is solved

Same here. At some point during the day (do not even have to activly start the app after fresh boot) Spotify drains the battery with about 1% per minute (!!) and is the most consuming process by  far (see attached). F-Closing the process does not help either, sometimes even makes it worse. Reboot helps for a little while till...see above. BetterBatteryStats alway lists Spotify (under Process) first with several minutes of runtime. This is bad because is revs the CPU up and stops the system from going to deep sleep. Tried fresh install, no change there. Running CM 11 M7 (4.4.2) on a i9100 (SGS2).

Please have a look into this. 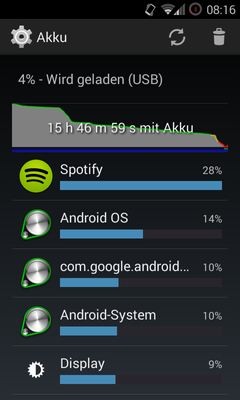 Same problem as all the others here.

Any idea if Spotify is working on this issue? Or are we supposed to live with this problem until the next regular update?

PhilippR
Casual Listener
No clue. Since Spotify didnt show great interest in this topic (or let's say, there is no feedback here and it's still not fixed) I am with Google Music now. I still like Spotify more for their cool app interface as well as the playlist management, however all that is useless when you cannot listen to the music for longer than an hour.
0 Likes

Same problem here (Motorola Moto G). Last week I upgraded to Premium and installed the app. Made some albums offline available and started listening. No problems so far, except that the battery was drained a lot faster. Previously I could use it for almost 3 days without charging (light usage with playing stored music using Google Play 2 hours a day), but now one day is challenging, with indeed spotify as the biggest consumer.

This is not acceptable.

So, I just downgraded back to Unlimited and removed the app. Spotify is great, but this app is not worth the 5 euro per month.

I have the latest update and the battery drain issue is still occuring. Using stock rom. Listened to Spotify on the way in to work (1 hr train ride). Battery went from 100% to 39% in an hour playnig off-line music with the screen off!!! Usually it drops ~20% over the same trip with the screen on, web browsing, facebook, e-mail, txt etc.

Please someone look into this and figure out what's going on, it is definitely not resolved.

Now we can only wait, hope this actually gets looked at.

We are currently looking into this.

There have been some recent reports that since updating to the new version, the battery drain no longer occurs.

With this in mind, please make sure you're running the latest Spotify app for Android.

If you're still experiencing excessive battery drain, please let us know the following:

Did I solve your problem? Click 'Accept As Solution' to help others find the answer!

(Link to imgur album if the embed doesn't work: http://imgur.com/a/CviR8)

Battery usage: see above, normally the battery lasts for the whole day with the screen eating most of it.

I still have the mentioned problems.

I applied some screenshots, here is a short explanation concerning the pictures:

- Screenshot 1: You see the ranking regarding the power usage. Battery decreased 8 % after using Spotify for 10 minutes

- Screenshot 2: 2 hours after starting Spotify (battery was at 58% at the beginning  The screenshot shows the result of the power-usage tool of my smartphone
- Screenshot 3: I stopped Spotify and made sure (via task manager), that it wasn´t running in the background. The picture shows, that it was nevertheless number one in power usage.
Next day I started Spotify with a full battery and stopped it about 2 hours later. The battery was near 35%, the analisys-tool said - even after having stopped Spotity - that it causes power loss.
I always use Spotify in offline-mode on my smartphone. And - most important - these problems haven´t occurred until I updated Spotify to the recent version.
There may be a lack of security in the old version, but now we have a lack of nearly any comfort and fun and usability 🐵
Please help!
Thank you! 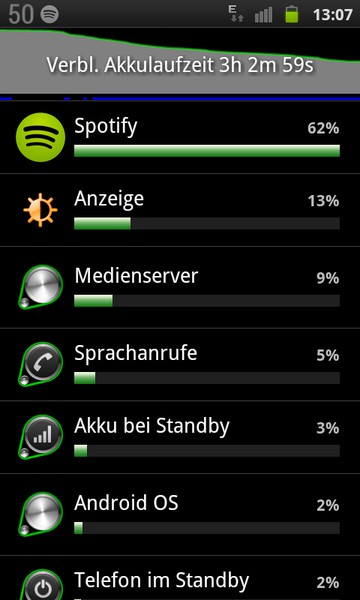 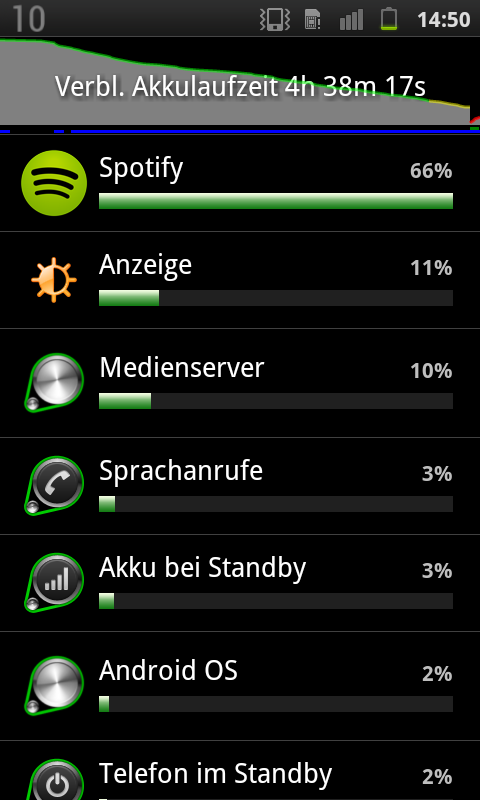 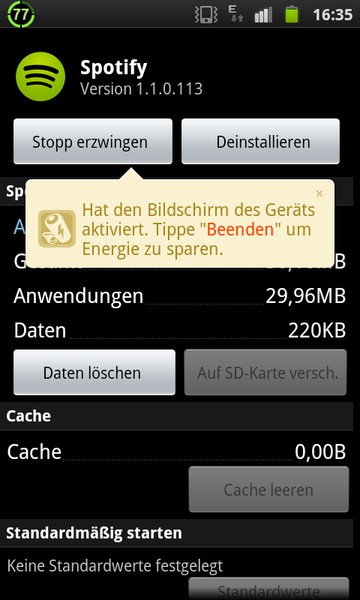 Ok...so i updated to the latest version:

If i use Spotify..even if im just hearing one song and then leaving the app...the process is running in background and you can watch the "CPU total" counter rise every second...every second the CPU total is rising a second...

Even if i force stop the app the CPU total is still rising. Only a reebot helps to quit the app...but then you have to keep spotify off!!!!