birfincankafein
Regular
Im premium spotify user and I have offline playlists and these playlists contains 1500+ song. I keep these musics because Im using metro in my country. I bought premium for this reason.

And with last update I think spotify suddenly deletes my offline musics. I bored to download them again and again. I tried to clean setup on my Android device, used Es File Explorer to delete all spotify datas. I have 32gb sd card and there is no storage problem. I unmount sd card when phone is off.

1- Spotify deletes my offline musics and playlists on My Android device. This isn't happen at my laptop. Only my android device.

Why this 3 problems are happens?

mikeybandit
Newbie
this keeps happening to me im totally sick of it. its not only costing me everytime i have to download all my music again bit its terribly annoying m
Reply
2 Likes

Same thing happened to me I'm totally gone free with spotify but was premium. Just about 3 or 4 days ago I went into spotify to listen to my over 50 down loads & found that all my favorites got deleted after their system logged me automatically logged me out of my account. Spotify sucks & if it wasn't for u tube saving most of my music I would of been lost. I'm passing this on to all my social media friend's in the network about spotify and for anyone who is premium I feel so bad that you had to pay for something that is worthless. Darryl

Timclement1970
Newbie
I'm having exactly the same problems. Keeps deleting play list over and over and over again ..... never sure if I have a library or not.
Reply
1 Like

I did a little digging on the forums and I found that you are clearly not the only person experiencing this issue. However, I think I see a common factor most of you share.

According to this post, other users experienced similar issues due to the SD card being unmounted. Perhaps this is somewhere to start, and your issue is related to that.

ULTRAKINGPIN
Newbie
I have the same problem, it suddenly changes to save the download songs on my device and not on my sdcard, so it deletes 15GB musik, not only that i cant use my spotify libary when im outside of my wifi, its also very annoing to download 1,700 songs over and over again ....
I quit premium for that reason.
Also if there is a speziall offer like "pay one month and use 3" i cant use it becouse im permanent customer?
Mot very user friendly.
I may get premium when they fixed it again, but who knows when it will be.
Reply
3 Likes

Mesraim915
Newbie
So no one from Spotify has replied with a possible solution to this?
Reply
1 Like

So many people have this issue and it has not been fixed since 2013, seriously ?

I dont know why but Im using Windows 10 Pro x64. I sync my playlists to offline. When my pc crashes cause the battery problem, Spotify deletes my all data and my profile on Spotify Dekstop App. I have to login again and start offline sync again. It starts happening from the last update.

Krookr33
Casual Listener
I have this problem too. Every few days Spotify changes my storage setting to use internal storage rather than my SD card and then all the songs on my SD card are gone. The best solution I've seen so far is Google Play Music.
Reply
1 Like

Same here. I"ve haad to download my 2500 songs playlist like 4 times beacuse it's suddenly unavailable offline. I have 6GB free on my sd card when it's all downloaded so it's not a storage problem. I can't believe spotify haven't solved this problem

I reported the problem to Spotify Tech Support yesterday, and they sent me the instructions which I pasted into my previous post this morning.  I followed all of the instructions and reset the offline device (via the web), downloaded and re-install the lastest Spotify Version for Android (Kindle Fire). I set Storage to SD Card and I re-downloaded my 850 "saved songs" (for the 10th time). I checked several times to see if my downloaded songs were still there, and they were still there. GREAT!!  Then 5 hours after the re-install I checked and all 850 songs were deleted again and Storage switched from SD card to Device.

This has been happening to Users since 2012, and is still happening.  Not fixed after 4 years.  I don't think that any Spotify Technicians even bother looking at Community Posts to see what problems users are having.  I think I will be cancelling my premium account!!

Any suggestions of other music services that  provide streaming via wifi to home entertainment systems or wifi speakers.  I checked out Amazon Unlimited Music, but it doesn't look like this provide this feature.

For me this happens every time my phone is switched off.  The downloaded songs are deleted,  The storage is reset to internal.  Absolutely rubbish.  I'm a Premium/Family subscriber and am going to be looking for an alternative.

Kirky13... just wondering if Spotify deletes the downloaded songs for each member of your Premium Family plan?  I'm about to give up on Spotify, because of the Faulty Music Download option.

No just mine.  The rst of the family use iPhones and I use a Samsung.

Actually it looks like its happens only when working on SD card. I checked the some logs and it looks like it cant reached some files and it throws error. And also I think that when this happens more times application thinks all music files corrupted and it deletes all musics. The only explanation is this kind of errors. I think they needs some logs or some test devices which this problem occurres.

Il_gomez
Newbie
This ia really annoying. spotify better fix this bug fast. what happens is. Spotify would suddenly log me out while Im listening to music. And when I log in, all of my offline music are no longer downloaded an need to be downloaded again. and this pops up. 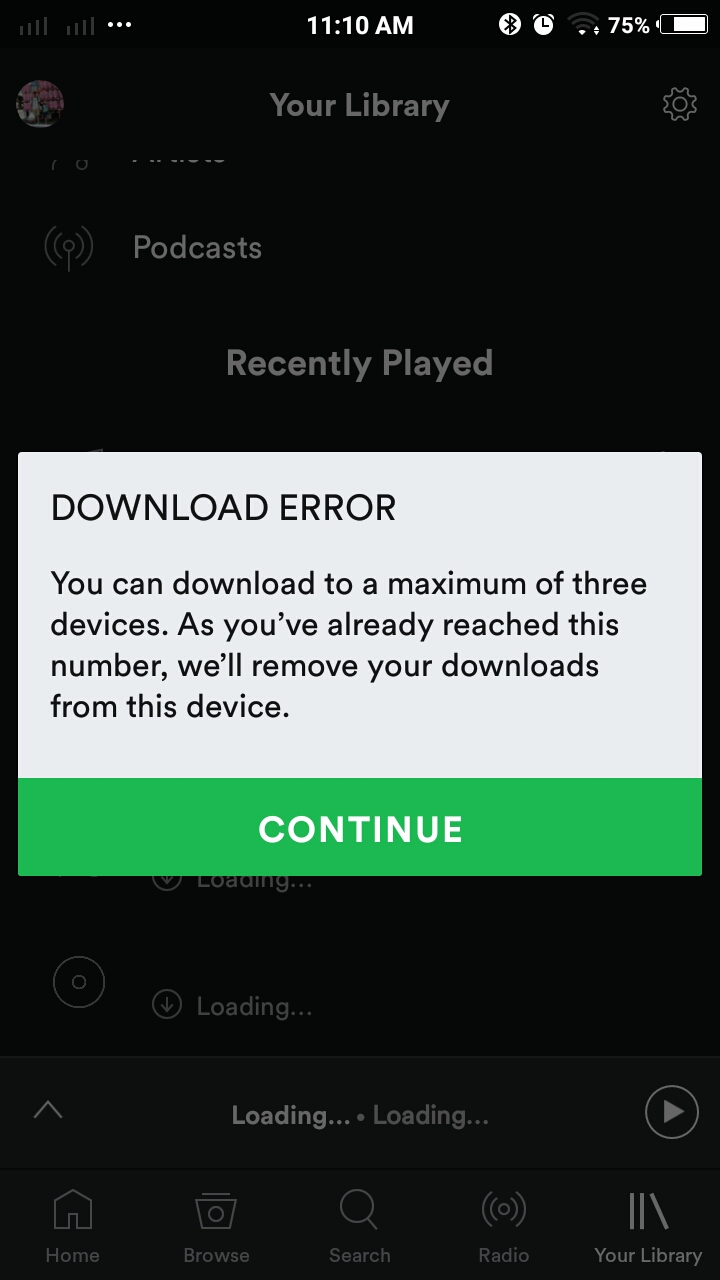 greeve440
Newbie
This is happening to me on Nexus 6p with internal storage...
Reply
0 Likes

Similar issue happening to me as well. I only use my PC and Android (LG G5). Every 24 hours or so I have to re-download all Artists on my phone because Spotify randomly deletes them, but Playlists do not get deleted. All my music is stored on an SD card. Ive done many clean re-installs, deleted caches multiple times (In app and in Android settings), re-formatted my SD card, maybe performed some ancient voodoo rituals, because at this point im not ruling any sort of possible solution. Lets solve this issue PLEASE.