Well January is almost over, and this are my TOP10 albums streaming this month:

All this albums are highly recommended, hope you enjoy them as much as I do!!!

JpgchiefRock Star 14
Help others find this answer and click "Accept as Solution".
If you appreciate my answer, maybe give me a Like.
Note: I'm not a Spotify employee.
Labels:
0 Likes
4 Replies

I still wonder how you manage to have so much energy to listen to so many new albums and songs! I'm slightly familiar with Mono and that new album looks interesting. Will have a listen later. 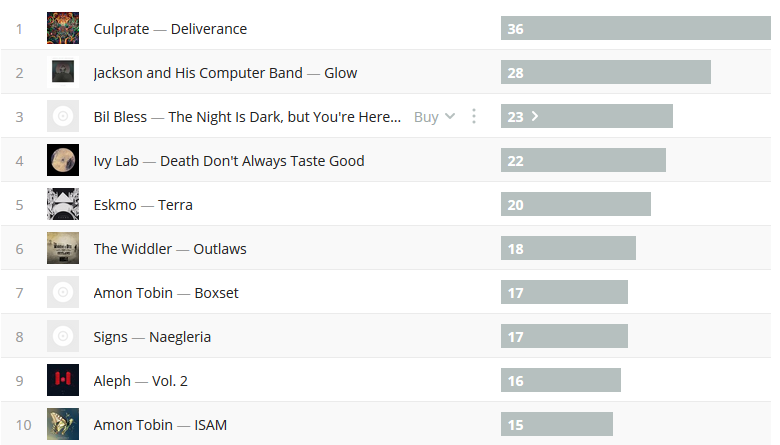 It also says I listened to 999 albums, lol

And in the same lineup, I'll explain:

I'm in love with songs like
spotify:track:5YmcqKxFu3ycgFXYlfrQF9:small (that part at the end 😭) and

I love putting my headphones on late at night and listening to it. Heightened spirit, tears of joy. Hell, how I love that album!

2. Jackson and his Computer Band - Glow
I have one of their songs in my playlist, it's cool in a weird and extatic way:

spotify:track:50XA0BH4DJux5xJCXzBduW:small
I also went through the album... I can say that if you like that song above, you should also like the album. It's pretty solid. 🙂

3. Bil Bless - The Night Is Dark But You're Here With Me
Emotional reflection on some songs. It's also beautifully made, honestly.
spotify:track:0LtyuMbqlF4IQVOqZr5vLF:small

4. Ivy lab - Death Don't Always Taste Good
While I don't really like the entire album right yet, I do love the following 2 tracks:
spotify:track:4tob5LNqb3F9r8SwHttPMw:small (the luxurious drive through highways)
spotify:track:5ucOqOlB2Q8YQJrH22mayI:small (just a great one)

Ivy Lab is one of the greater d&b artists.

5. Eskmo - Terra
Eskmo's sound signature is quite unmistakable and I've been loving his tunes for quite a while. I wasn't aware of Terra though, until a Daily Mix dropped it on me.
spotify:track:2fHIooFSs175CUBDQKB37H:small
Submerged in sound (or emotions disguised as sounds) and soft piano sounds.

It's the title track of the album which is so cool!
spotify:track:0fmGW57GzkEq010veVqi9x:small
Western soundscape intermixed with such a chill beat.

8.  Signs - Naegleria
Another amazing and head-turning d&b artist (now disbanded though). Naegleria is their last EP.
Be warned for it's quite a sharp and exciting mixture of sound design, bass and breaks and some immense joy of creativity. I love this song, especially the second half!
spotify:track:47dTxUx58Grc4LacflYinB:small

I was listening through various albums released under Renraku. Safe to say I rediscovered some true gems.
Aleph's album gets mysterious plays from me. 🙂
And I still love that incredible bass in this song. It's so... flowing!
spotify:track:2hGCN37710ufCrTZwewd73:small

Glad I didn't get to Renraku compilations yet, otherwise the chart would have been mostly Renraku.

SebastyRock Star 18
Help others find this answer and click "Accept as Solution".
If you appreciate my answer, maybe give me a Like.
Note: I'm not a Spotify employee.
1 Like

Awesome @Sebasty thanks for sharing!!! 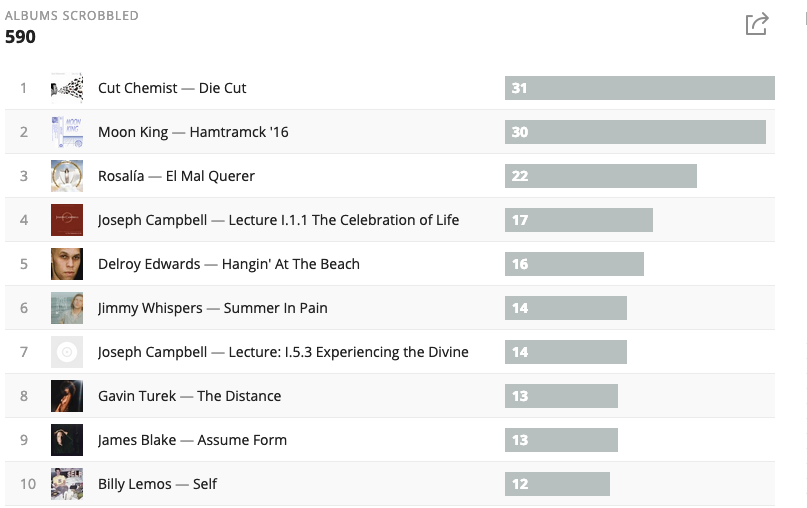 7. (More of the same lecture series)