Since announcing the launch of our new smart player Car Thing last week, the enthusiasm we keep receiving in response has been as awesome as the thing itself.

More than just a player, it’s your own soundtrack curator when in the car while it allows you to completely focus on driving.

Now, a question for you, dear Community folks:

What are the features of Car Thing you like most so far?

Car Thing has many awesome features - like the voice control, the steering dial, or the super-efficient display - which might make it hard to pick only “one” best feature.

So don’t hesitate to let us know “all” the features you think are great or the best ones!

If someone asked what I personally consider one of the best features (aside from those already mentioned above), my reply would be: “the four preset buttons”. I love the idea of having super easy shortcuts to my own personalized mixes of my favorite artists, playlists, stations, and podcasts while driving!

So, Community, what do you like most about Car Thing?

Let us once more share we’re super happy to be seeing this positive response and thank you from the bottom of our hearts. Your inputs will help us make nice things great and awesome ones, fabulous.

Don’t be shy and let us know what you enjoy in the comments 🙂 We’ll be checking in regularly!

Mario Moderator
Help others find this answer and click "Accept as Solution".
If you appreciate an answer, maybe give it a Like.
Are you new to the Community? Take a moment to introduce yourself!
Reply
7 Likes
17 Replies

Hubo
Spotify Star
Eventhough I haven't tried it personally, I just love the UI! It looks well-designed, easy-to-use with the car user in mind! 🙂
HuboSpotify Star
Help others find this answer and click "Accept as Solution".
If you appreciate my answer, maybe give me a Like.
Note: I'm not a Spotify employee.
Reply
5 Likes

I've been trying out my Car Thing for a few days now, and I love that this provides an alternative for anyone like me who has an older vehicle without an in dash head unit, so that we can easily control Spotify, check what track is playing, etc. The variety of mounting options are fantastic.

I agree with you @Mario about the presets! I expect to get a lot of use out of that, and it will be really nice to save my favorite playlists I listen to when driving for quick access and being able to easily get some music I love playing right away.

dinomightSpotify Star
Help others find this answer and click "Accept as Solution".
If you appreciate my answer, maybe give me a Like.
Note: I'm not a Spotify employee.
Reply
5 Likes

My favorite feature of Car Thing:

GGenie
Casual Listener
I just got my Car Thing the other day and have been enjoying it a lot so far. It was very easy to set up and within a couple of minutes, I was listening to music. I enjoyed finding out that the screen automatically adjusts its brightness when it becomes dark outside.
One issue I have found though when I use the voice command to add a song to my queue, the song is not put into the queue. Is the Car Thing able to receive software updates through Bluetooth to fix these bugs?
Another concern is how delicate the screen feels. I worry I will scratch my screen and wish I could put a screen protector on it.
Reply
2 Likes

Thank you for your post. Welcome to the Community 🙂

We suggest you check and follow the troubleshooting steps listed on this article. If that doesn't work, please open a new thread here in order to help you better.

This info will help us to investigate further.

We'll keep an eye out for your new thread.

Car thing does one thing, and does it quite well.  I have an older car with no bluetooth or aux in, so I wasn't quite sure how well this was going to work out for me.  Prior to car thing, I'd connect via bluetooth to an FM transmitter, and that worked pretty well, however, I could not see the song, the playlist or any other relevant info without picking up the phone to look at it (which, in my area, is illegal to do, so I basically was stuck listening to whatever playlist i had started my drive with unless I stopped somewhere).  As the car thing has a handy CD tray mount, I used that and have a screen that is easy to see and is high up on the dash, so as to not pull my eyes away from visibility of the road.  As for future enhancements I would like to see, having the genius data display seems like the next killer feature to add.  Since genius data is not video, and is only text, I imagine that this feature would be easy to adapt to remain legally acceptable in most areas.  Finally, when new car thing firmware/software is available, how do we install it?  Or are the new versions automatically pushed to the device from the app?

When new Car Thing firmware updates are available they will automatically be installed from the Spotify app when using Car Thing.

In the past I noticed a popup in the app notifying me that it will try to install updates next time I use Car Thing and other times it just auto updated without a notice that there was an update available.

MattSudaSpotify Star
Help others find this answer and click "Accept as Solution".
If you appreciate my answer, maybe give me a Like.
Note: I'm not a Spotify employee.
Reply
1 Like

A few improvements for car thing in my short time with it.

Ability to add to queue with wheel or touch screen.

Infinite scroll instead of having to click "more" for albums, artists and playlist after every 8 options.

Lastly but importantly, have the same "sort" options as on mobile or computer. Random order albums and artists is an oversight.

A lot of ways to set-up in your car

Putting an AUX output on the device would make it much better for people like me with and older car that doesn't have bluetooth since you could leave the AUX cable connected at all time and it would render the audio system a real bluetooth system. No need to remove my phone from my pocket and connect it anymore.

Loving the sleek and elegant look and feel. I also like the size and portability because I can use it in the house as well. The fact I use it the CD holder also acts as a stand on the counter when I am not in the car. So easy to use but also sneaky elegant. 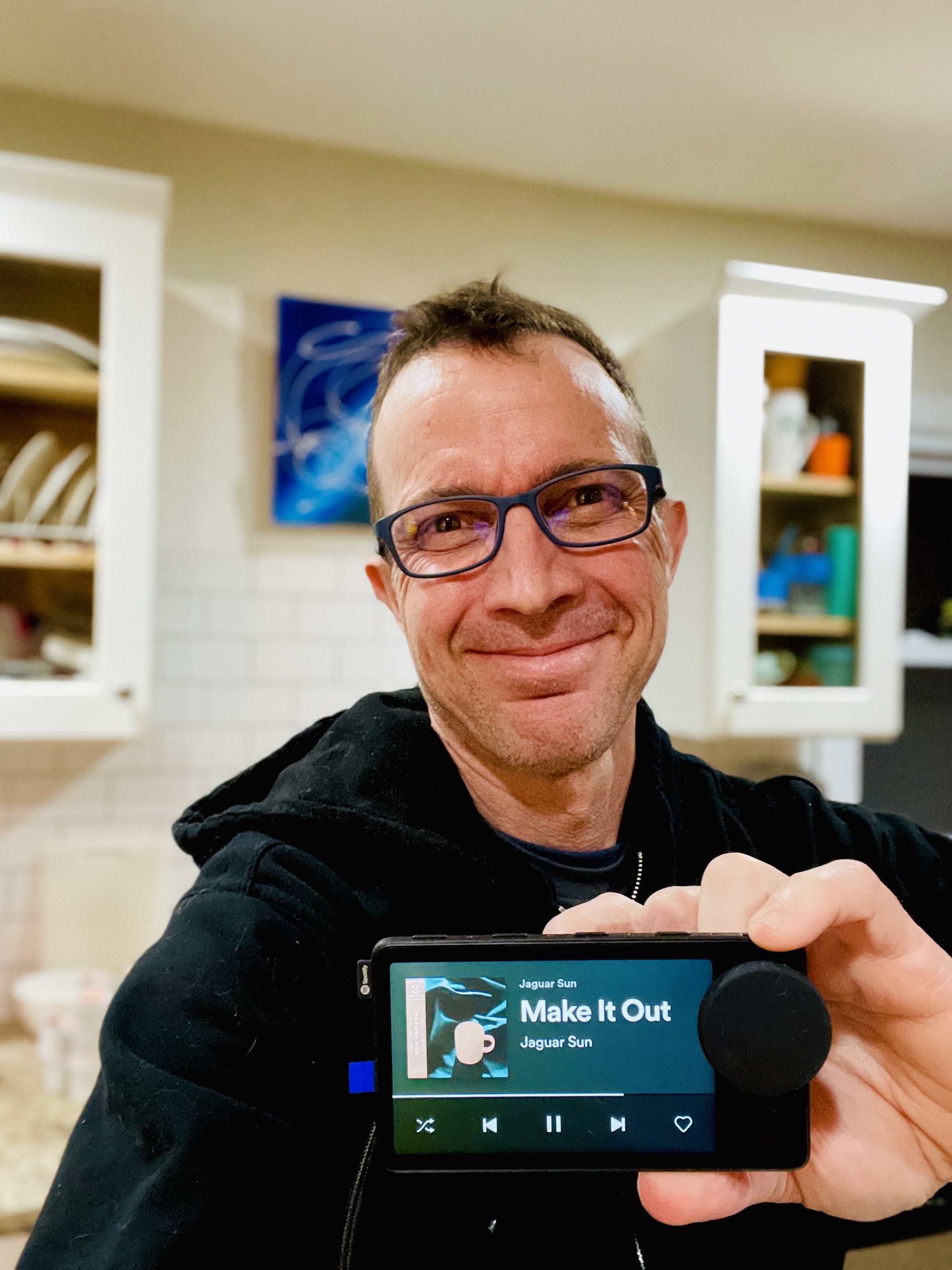 I love being hands free using Car thing. The one thing I would like changed is to move the magnet on the back to the very bottom of the device in stead of in the middle. It covers up the clock on many cars when using the CD player mount. Moving the magnet to the bottom would make it so the bottom of the car thing is even with the CD player and doesn't cover up the clock.

I'm a Premium Family Account user and I love the design of the Car Thing, the preset buttons and voice control are definitely handy, I have a 2010 Honda Accord with just an AUX port. I also have a Echo Auto installed for Garage doors and navigation. I wasn't sure how well Car Thing would play with the ECHO Auto.  Turns out they play nice together.  My Echo Auto is connected to my AUX port. My Phone (Samsung Galaxy S20 FE) connects to the ECHO Auto via Bluetooth, and the Car Thing integrates seamlessly.

My two biggest gripes, which at first were not a big deal, but as I've used the Car Thing more and more they are becoming more of a headache.

1. When I start my car, whatever was last playing on my phone in spotify immediately starts playing, and vice versa. If I was listening on my phone and then start my car, I have to hit play to continue playing. Something about the pairing process toggles the pause/play button. I've tried every permission and background setting on my phone, and I haven't been able to fix it.

2. Unable to sort playlists at all! such a huge miss. I have a playlist that is 3 years old with over 300 songs that I love to shuffle sometimes, but most of the time, I play the most recent songs added. In the Car Thing, it defaults to the first song added from 3 years ago and works back from there. I can sort playlists in the mobile app? Why not on the car thing? lame.

Another annoyances, are having to click 'more' when scrolling through playlists and podcasts. Just keep scrolling, why is this even a thing? How is having a 'more' button helpful? Also, sorting Podcasts by newest episode instead of most recent follow, but that's a general Spotify app issue and not really a car thing specific thing. Spotify in general is not a great app for podcasts.

All in all, I would probably not have paid 80 bucks for this device knowing now what the limitations are. Hopefully they can fix some of them with an update? For now it's used very minimally.

I have been enjoying my Car Thing but wished there was a way to power off/put device into sleep mode without having to disconnect the cigarette power adapter.  This would especially beneficial for cars that retains power in the cigarette lighter even when the car ignition is off.

For now, I am using a power bank with an on/off switch to power my device. 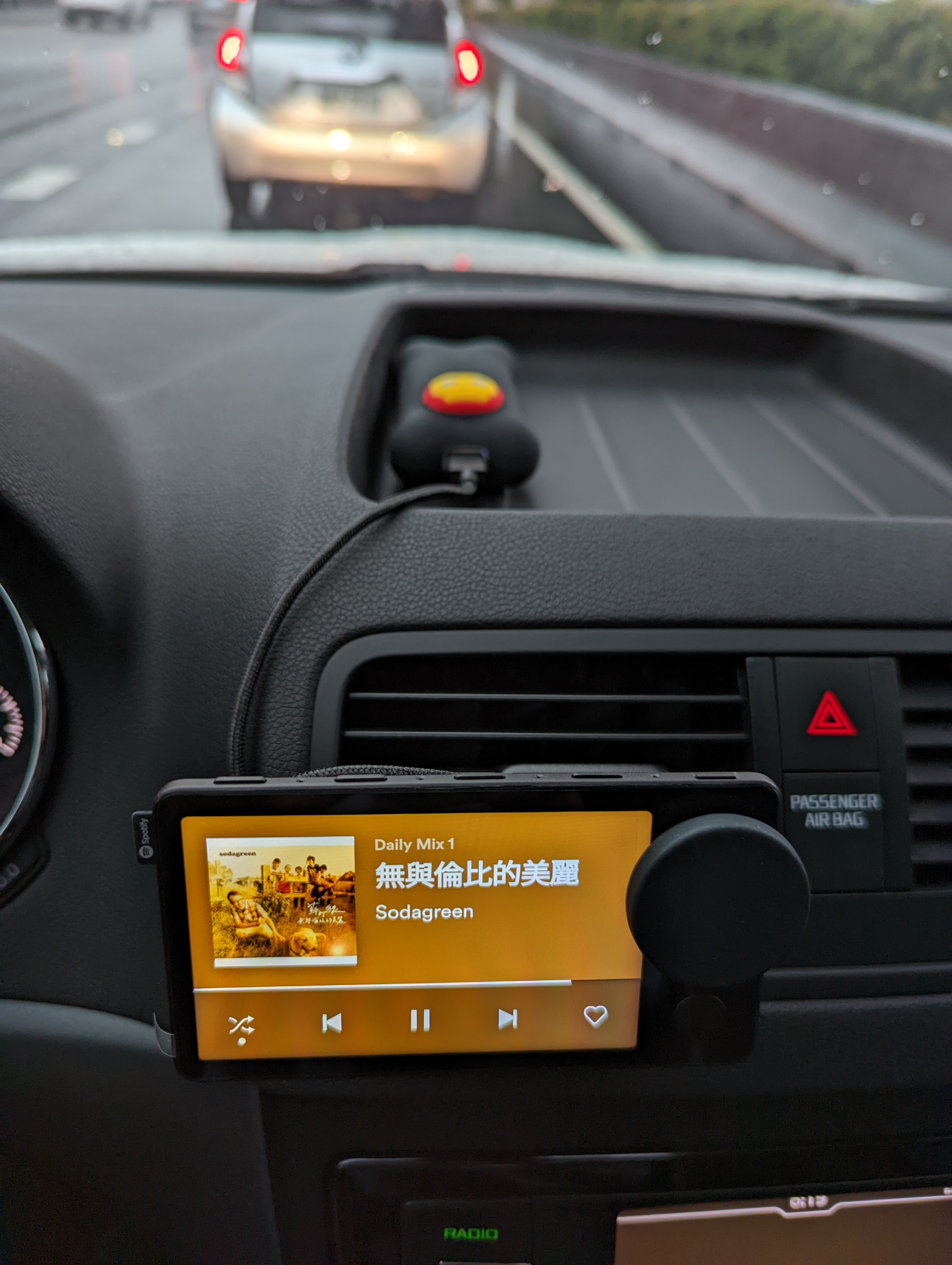 I didn't read the description carefully enough to notice that Car Thing only worked with an AUX connection when used with a phone with a headphone jack. I saw "AUX" as one of the input options and couldn't click buy fast enough. My stereo has no Bluetooth, but has an AUX in. My old phone had a headphone jack, but I traded it in when I got my new phone, which only has Bluetooth.

I wound up buying a well reviewed USB powered Bluetooth to AUX unit which is probably the better option anyway, since I don't have to run a cable from the Car Thing on dash to the AUX input in the console between the seat backs.

I do wish that the Car Thing didn't auto-start playback when it powers on. If there is a setting for that, I haven't found it yet. While we all know Spotify is great, some of us like to listen to other things sometimes, too. It would be nice to not lose our place in Spotify due to Car Thing's autoplay.