What are your favorite songs at the moment ?

What are your favorite songs at the moment ?

What are your  favorite songs at the moment?

What are your songs listen looped  and on repeat rewind ?

According to you, what are you listening to loop right now ?

for me, I listen to the same songs that I really like on a loop. my favorites listen at the moment :

Streelight Manifesto The three of Us

Re: What are the favorite at the moment ?

I generally never loop my favourite songs, but I may loop albums. :' )

As of right now, a song that really gets me good is Knot by DFNKT & Adjusted Speech. It's up there among the top favourites for me, it's amazing 😄

This song has those amazing swelling synth/basslines that massage my soul. It's also growing in intensity, becoming more and more mindblowingly pleasing. It feels like a combination of racing the bike, ecstatic from the warm summer night and a long kissing/cuddling session with your love.

Headphones are a must, unless you have great speakers for the low-end. This song makes no sense on laptop/phone speakers.

SebastyRock Star 18
Help others find this answer and click "Accept as Solution".
If you appreciate my answer, maybe give me a Like.
Note: I'm not a Spotify employee.
Reply
3 Likes

Re: What are the favorite at the moment ?

The song Thge Three of Us of group Streetlight Manifesto i love song because the song resemble at the OSt to the serie Disenchantment.

your know series Disenchantment on Netflix.

The creator to the series is the creator The simpsons

Hi @Flanstario1, I like “Superstition” by Stevie Wonder as well, especially the sound of the clavinet; great track!

As for me, here are my top 10 most-played tracks from the past 7 days according to Last.fm, for a relatively recent look at the tracks which I’ve been listening to often: 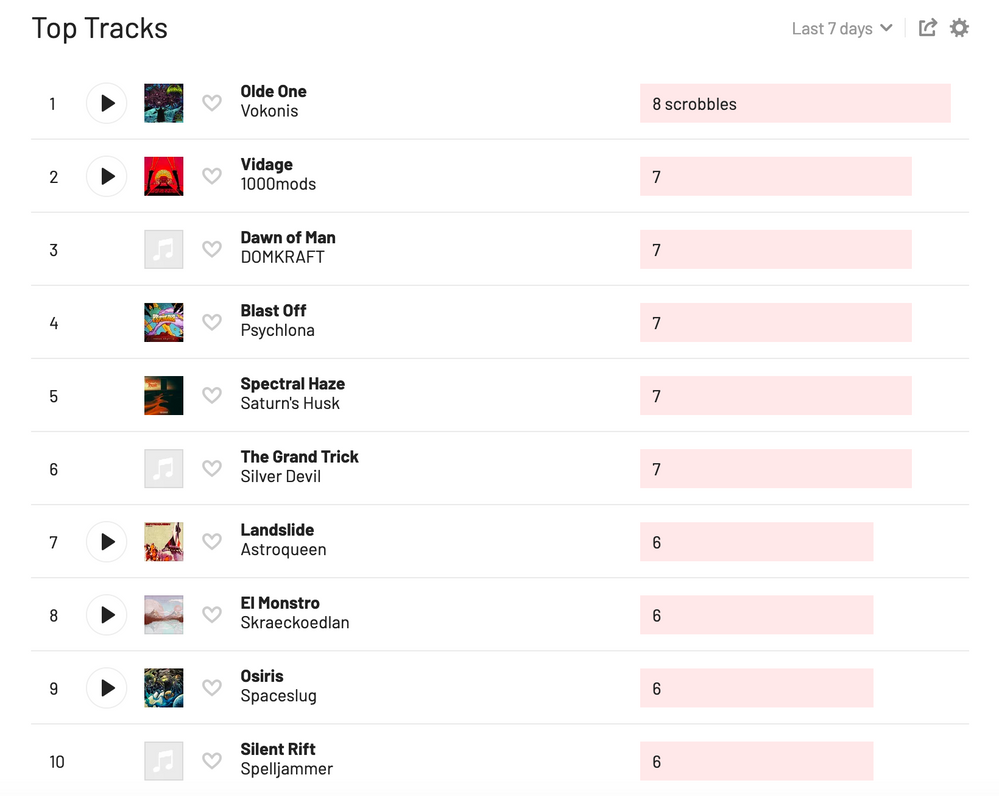 “Olde One” – Vokonis: I found this track a long while back in my Discover Weekly, but hadn’t saved it to my library upon listening to it for the first time. More recently, I was browsing Spotify’s Stoner Rock playlist and found this track there, so I listened to it and rather enjoyed it. The album’s title (Olde One Ascending (Heavy Stoner Doom)) accurately conveys the genre of the music; and I especially enjoy hearing the heavy, repetitive riffs as well as the guitar solos in this track.

“Vidage” – 1000mods: I think I heard this song in a recent Group Session, and really liked the desert/stoner rock sound on this track; to me, it feels pleasantly laid-back and groovy, even when the heavier, more distorted guitar starts in. I was kind of surprised that I hadn’t listened to the Super Van Vacation album that it’s on before, considering that “Vidage” is 1000mods’ current most popular track on Spotify.

“Dawn of Man” – Domkraft: I really enjoy hearing the hypnotic, sludgy guitar riff that repeats over the course of the track, as well as the effects-laden guitar solo towards the end, as I think the unique characteristics of the distortion on this track have a way of lulling my mind into a nicely peaceful space; highly recommended track for fans of psychedelic doom and sludge metal

“Blast Off” – Psychlona: I was introduced to this amazing band by  @StompingLlama, and this is my current favorite track from their Venus Skytrip album; the songs starts with a relatively simple, echoing guitar melody that repeats as the bass and drums kick in. A sample taken from a launch sequence then signals the entrance of the fuzz-laden rhythm guitar that always seems to buoy me along into a state of psychedelic/stoner rock bliss.

“Spectral Haze” – Saturn’s Husk: I discovered this band in @StompingLlama‘s Psychedelic Stoner Marsh playlist, and I am quite impressed with their music. My current favorite track by Saturn’s Husk, this instrumental track is characterized by an ominous, doomy riff that repeats throughout the course of the song; a soloing lead guitar and eerie-sounding keyboards later join in, elaborating on the main riff to a wonderful effect.

“The Grand Trick” – Silver Devil: This is another great instrumental track that I discovered from Psychedelic Stoner Marsh. Crushing, precisely played riffs and dynamic, haunting melodies make this my favorite track by Silver Devil. And considering that they have less than 1,000 followers on Spotify currently, I’d say that Silver Devil are quite an underrated band.

“Landslide” – Astroqueen: I really like the heavy fuzz-tone guitar riffs on this track by Astroqueen, a band that I became interested in after hearing their most popular track, “Superhuman God,” on Spotify’s official Stoner Rock playlist last winter. “Landslide” is the first track on Astroqueen’s 2001 album, Into Submission, and after recently revisiting this album, I saved this track to my library and have been enjoying listening to it often in recent weeks.

“El Monstro” – Skraeckoedlan: Featuring ethereal vocals, stoner/doomy riffing, and psychedelic effects-laden guitar soloing, this is a dynamic track that builds up an otherworldly atmosphere throughout the course of the track; it just keeps getting better as the song progresses; highly recommended listening for fans of psychedelic/stoner rock

“Osiris” – Spaceslug: Blending heavy stoner/doom riffs with outer-space-like effects in a unique way, it’s hard for me to compare Spaceslug to any other band. “Osiris” is my second favorite song by Spaceslug, as well as my second most-scrobbled track since I joined Last.fm a couple years ago (121 scrobbles so far).

“Silent Rift” – Spelljammer: This is another great track that I discovered thanks to a recommendation by @StompingLlama; it’s an epic, 10-minute stoner/doom track with heavy, hypnotic riffs, and is my favorite track from Spelljammer’s 2021 album, Abyssal Trip.

As for the tracks that I’ve been listening to lately according to the On Repeat and Repeat Rewind playlists that are made for me by Spotify, I’ve copied the current tracks from them into playlists to share with you, in case you’re interested in checking them out:

TreyAnastasioRock Star 7
Help others find this answer and click "Accept as Solution".
If you appreciate my answer, maybe give me a Like.
Note: I'm not a Spotify employee.
Reply
3 Likes

A song Superstition of Stevie Wonder is my favorite and i have  discover year 2017.

I've been listening intensively to several genres recently, mostly with the intent to check well-known tracks instead of discovering new ones. My On Repeat playlist includes indie pop, techno, trip-hop and electroclash tracks, along with some favorite gems from French singer-songwriter Mylène Farmer.

Looking back at my Repeat Rewind I can see I played a lot of Enya in the last few months, but keeping the entire new-wave and electro mood.

IvanModerator
Help others find this answer and click "Accept as Solution".
If you appreciate my answer, maybe give me a Like.
“Music is the wine that fills the cup of silence.” - Robert Fripp
Reply
3 Likes

my new favorite songs  when i have discover recently and i listen at the moment.

DAVIS Peace love and rock n roll. I have discover this song yesterday according to my liked songs.

My favorite current according to my playlist on repeat.

Howdy! Cool songs! One of my all time favorites is Blaze of Glory by Jon Bon Jovi but I never see it talked about lol.

Bit low on energy so I thought I'd just do what others responding to the thread have done and post my 'On Repeat' playlist.

I recently bought a Balatron album called IÐAVÖLLUR. It's quite a head-spinning collection of awesome beats and great sound design. Some of the songs such as Hildr have found place in Amon's sets as well, but there's another song that has captured my attention. It's called Amelia's Dream and it's such an incredible chune..!

It has this synth sound that's like a combination of a (fog)horn, echoed semblance of cello string and something more I can't really put my finger on and it's so charged, the emotions it brings upon me are such a sweeping mixture of feelings. Love, grief, longing, awe, feeling very small, yet very present, the knowledge of how it feels to hold someone's hand but not able to do so right now, all sort of flooding under the mesh of this dream state.

Have to admit that the album purchase was singlehandedly driven by this song, it's so stunning...!

SebastyRock Star 18
Help others find this answer and click "Accept as Solution".
If you appreciate my answer, maybe give me a Like.
Note: I'm not a Spotify employee.
Reply
1 Like
SUGGESTED POSTS
Log In