ALLOW THE USE OF PLAYLISTS OFFLINE WHEN USING DJAY 2

Spotify isgood with djay 2 but, they need to allow us to use the offline playlist when no wifi or data is available.

Update: This idea has been submitted again here:
https://community.spotify.com/t5/Live-Ideas/iOS-Playlists-Use-of-offline-spotify-playlists-in-djay2-...

Indeed, we can use Spotify offline playlists, but how can I play my offline Spotify playlists in Djay2 app?

Please coordinate with djay 2... We are all waiting patiently.. I already bought new ipad and reloop... Want till it was too late that I realized that needed wifi to make this work.

yes i need it when i start to run out of data on my phone.

The use of Spotify off-line playlists with Djay2 would be great, but despite rumors that Spotify is considering this, do you really think they are going to let it happen, and if so, when?

I Have copied this from a post I made on the DJay2 forum..........The ONLY reason I have a Spotify subscription is because I thought I could DJ with offline playlists.

Spotify team please realise that you will have so many more subscribers if you get this feature implemnted. If not, you will lose a lot!!!!

I've been DJ'ing with Serato and Traktor since their release. Coming from an all Vinyl background when DVS hit the shelves in the form of Stanton/NI's Final Scratch I was all over it and it truly revolutionised DJ'ing.
If I'm totally honest I always viewed Alogoriddims DJay App as a tool for the amateur DJ and never thought it was going to be a serious contender for the professional DJ.
At the BPM show last year I was experimenting with scratching on various controllers to see how close to vinyl and DVS they've got.
I was particularly impressed with some of the Reloop offerings as I particularly liked the feel of their jogwheels.
I also recently had my eyes opened to the amount of good music that has surprisingly become available through Spotify.
Once again, I never thought that Spotify could be a serious resource for DJ's but was pleasantly surprised.
A couple of months ago I read about Algoriddims integration with Spotify and decided to dip my toe in the water.
After a little bit of research I purchased myself an iPad, Reloop Beatpad, Djay2 App and a subscription to Spotify.
Since I got all the kit I've been having great fun mixing and scratching tunes from the Spotify library at home and even a couple of parties at friends houses.
Admittedly, in terms of scratching, it's no match for my Serato or Traktor DVS systems. But for the convenience of being able to just chuck an iPad and the Reloop Beatpad into a rucksack and rock a party, there's no match.
Last night, I was asked to DJ at a Golden Wedding anniversary. Not my usual cup of tea, but I thought "Why not?"
With Spotify, I don't have to buy the rubbish tunes that I know I'll be asked to play, I'll simply borrow them for the night from the Spotify library.
I asked the hosts and guests of the party to email me a list of tunes they would like to hear on the the night and proceeded to build playlists on Spotify.
Before leaving for the party last night I remembered to go onto Spotify and make all the playlists "AVAILABLE OFFLINE"
YOU CAN IMAGINE HOW I FELT WHEN I SETUP MY EQUIPMENT IN FRONT OF 150 GUESTS WHO WERE JUST FINISHING THEIR SIT DOWN MEAL AND WAS GREETED WITH A SCREEN ON MY IPAD SAYING "YOU NEED TO BE CONNECTED TO THE INTERNET IN ORDER TO USE SPOTIFY"
To say I felt sick was an understatement!!!
Now I know you are all thinking what a **bleep** for not checking it worked before going to the venue and yes, I do fell a **bleep**!!!
But I honestly thought that making my playlists available offline would work and had read nothing in any documentation that told me any different.
THIS IS A MONUMENTAL FAILING OF THIS APP!!!!!
THIS NEEDS TO BE ADDRESSES IMMEDIATELY!!!
I don't care what it requires.......Just get it done!!!!
Both Algoriddim and Spotify will benefit so even if you have to form a joint company in order to allow sharing between Apps, JUST DO IT!!!!
The only reason I now have the DJay2 App on my iPad and a subscription to Spotify is because I thought it allowed you to DJ from offline playlists!!!
I feel conned and will soon be ending my subscription to Spotify and asking for my money back for the DJay2 App if this isn't addressed soon.
YOU GUYS HAVE THE OPORTUNITY TO REVOLUTIONISE THE DJ SCENE WITH YOUR SOFTWARE INTEGRATING WITH SPOTIFY OFFLINE!!!!
THIS IS YOUR USP!!!!
THIS IS YOUR OPORTUNITY TO TAKE ON THE BIG BOYS LIKE SERATO AND TRAKTOR!!!!
ADD DVS SUPPORT AS WELL AND YOU ARE IN THERE.....TRUST ME!!! 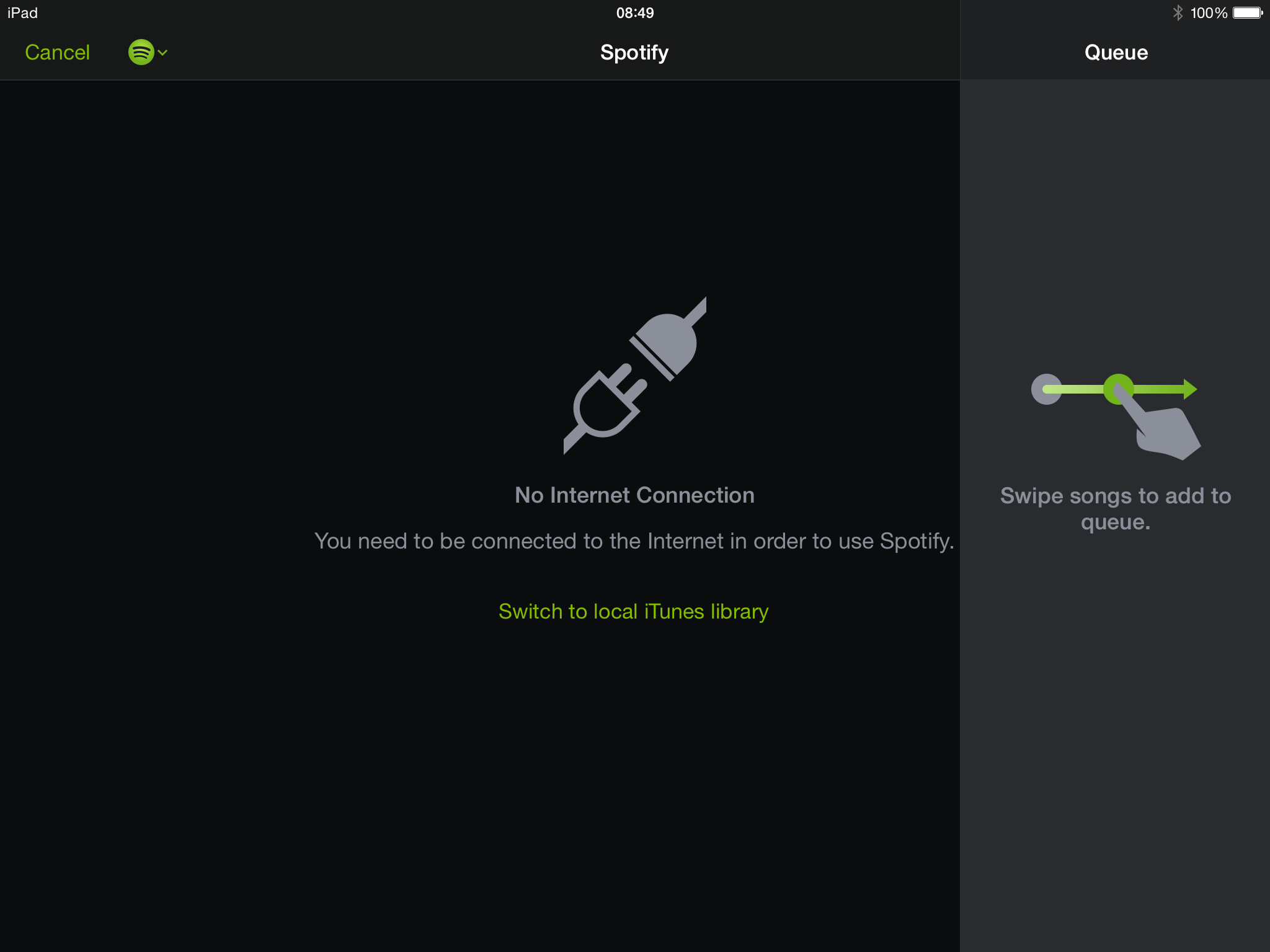 Please! Include it ASAP.

I am very disappointed with spotify and day 2. I bought an iPad, I subscribe to spotifuggle premium and I paid for day 2 to be able to dj. If the place I go to do not have Internet I cannot play offline spotify through djay2. I was not told this so I am very upset. I have been a loyal customer to spotify for years. Can you tell me a  way to correct this. Jenny

hi. i did run into the same issue one time when i had a gig where there was no internet access of any kind available. i have long known since purchasing djay that spotify integration doesn't work with offline music, and it was not a problem because i have unlimited mobile data or access to wifi networks at venues i do gigs. that time i had to settle with my own music that's on my phone, which i have not updated for a bit now since i have began subscritpion with spotify. i know this kind of instance would be far betwen, but still this feature would be nice to have in the future.