There is a great album art cover view when looking at a mobile device connected to Spotify (see screenshot) it would be great if Spotify client could offer this view in normal library and playlist browse mode - great way to remember stuff you have in your library! 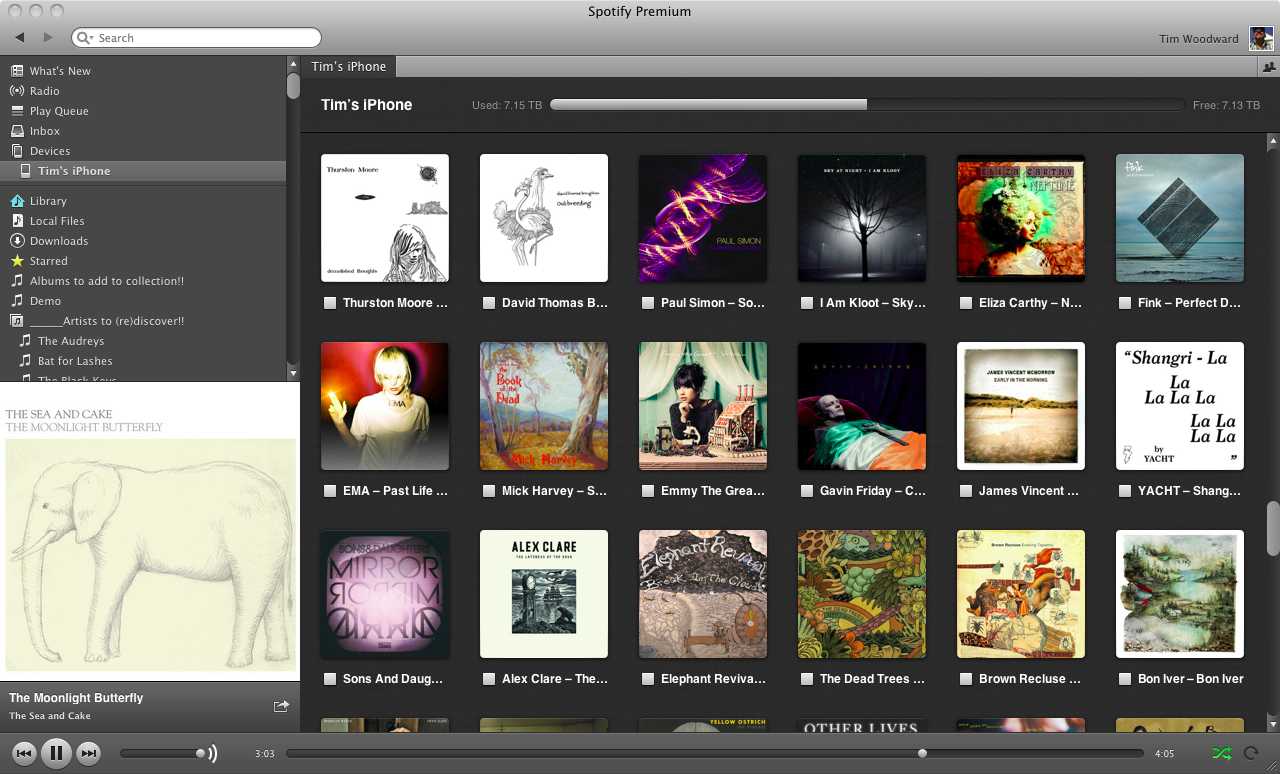 With "Your Music" you will be be able to view all the album covers for all your favorite albums. We've marked this idea as closed simply because it references your previous "Library".

For a glimpse of “Your Music” and our new design changes click here. These changes have rolled out to iPhone, desktop and web users this week, and will soon be available across all platforms.

i just star all those songs I want to hear later and they automatically get added to the stared playlist... works for me

Absolutely agree with the "Collection" request. It is the one and only feature that spotify is missing for me.

This is duplicate idea.

this is missing and if Apple finally gets its corporate head around the streaming concept I'm not sure Spotify will remain the compelling proposition it is today and yes that's meant to be a hint:)

I think the playlist way of doing things was an obvious choice at the outset, but I don’t think Spotify game plan was ever to be the best way to ‘collect’ your albums and artists. Well now it certainly seems it can be, we are seeing apps arrive with a far more ‘collection’ features - such as SwarmFM for example.

The problem is nothing seems to change anymore, Spotify have even started asking us for suggestions in their blog, but everything stays the same for months and months - who’s doing the programming, who’s getting anything done at all? Is it just me - I really can’t think of anything that has changed on the Spotify interface for the last year? Anybody?

So, Spotify, are you a ‘delivery’ engine only? Or do you want to be a ‘destination’ for people ‘collecting’ music as well as people ‘discovering’ music? I watched a documentary on the ‘single’ last night, and it’s true, there’s nothing left physical any more, nothing for you to hold in your hand and put in a cardboard box and then look at 20 years later! Nothing to get out and play to your kids and relive your youth!

Spotify won’t be here in 30 years time, neither will your smartphone or your portable digital media player (it’s still a walkman to me!) so what are all you young folk keeping your record collections on or in? Or is music so disposable and throw away now no-one wants to go look at it later? Well let me give the next generation of music lovers a gentle hint… you will so want to relive your musical life story when you get older and if you don’t actually have it anywhere (even in a digital file vault!) then you will never remember that track that was playing in the club when you kissed your first transvestite (actually you might remember that one unaided!). :0)

Winamp does this well with nice options of what infoto show along with th album art, and sorting in many ways. That 'd be Nice

Yeah this is good. But why only in library why not option to browse all of Spotify this way, if I like to... Looking for known albums is faster with covers than lists sometimes

Hi, it has been some time since there has been an update on Spotify from this. Is this idea being considered? For those of us who are album orientated or listen to classical the functionality isn't great for browsing.

Rdio did good on this too