as i wrote in the subject, i would like to request you to create a second kind of german language setting, one "traditional german" option and one "gender sensitve" option for those who like this more than the traditional german.

For me i have to say that the gender sensitive variant of the german language is really hard to read and gives with every star within the words an opstacle.

Thanks in advance and best regards

Hey! Thanks for coming to the Spotify Idea Exchange.

Currently there are no plans for changing the German version of the app. As such, we're closing this idea.

Should this change in the future, we'll make sure to post an update.

I think we have to accept the fact that sometimes companies don't do what the customer satisfies but rather what they think will lead to a better world. They will not change it because they want us to get accustomed.

But there is a a strategy out: Optional Gender language in apps must become a general practice standard - just as gender wording became now standard in so many other applications. If it's discriminating to no refer to people according to their gender, it's also discriminating not to let people choose, right?  Fighting intolerance with intolerance.

Once other important apps will make this optional, spotify will act accordingly - or at least need to justify why they don't. Now they just ignore.

There is this "new"**bleep** share this link in your social media stories and posts to get more attention to it. Maybe Spotify attempts to listen to their users this time.

Crazy, their censor filter is not even good.

How comes that a Company and their member*innen know better what the users*innen want?

And its not like the women get empowered by that. They hate it, too!

Voted on your idea:

My petition from the beginning of the year was closed after a few days and integrated into this thread.

Proponents of gender * discriminate against the opinion of other people and the male gender, because in German some terms are "neutered" (e.g. Förder:in instead of Förderer) .

In addition, they are anti-democratic, because according to various surveys 65 - 85% of German-speaking respondents are against the gender language are, or consider it unnecessary and excessive.

Here is a survey from Civey that proves this statement. 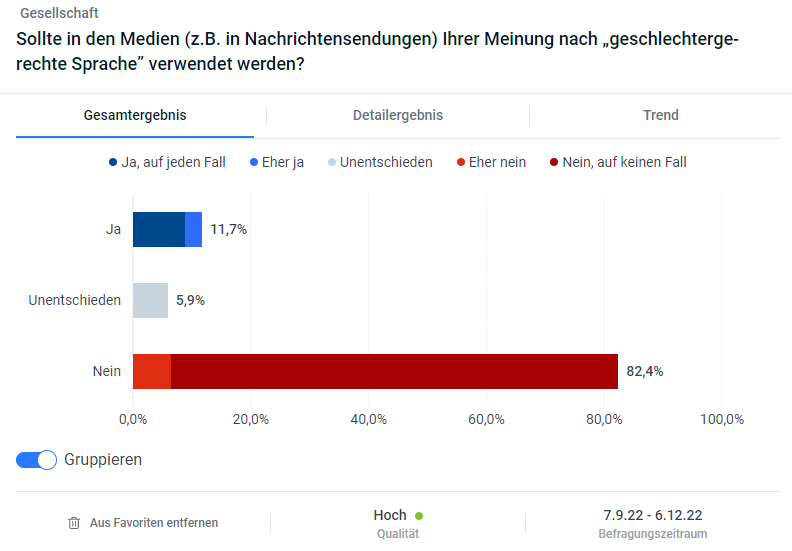 (In January the rejection was still 80%).

IMHO here the opinion of a minority is forced on a majority.

And the gender * is also sexist, because it reduces people only to their gender.

And here is another one 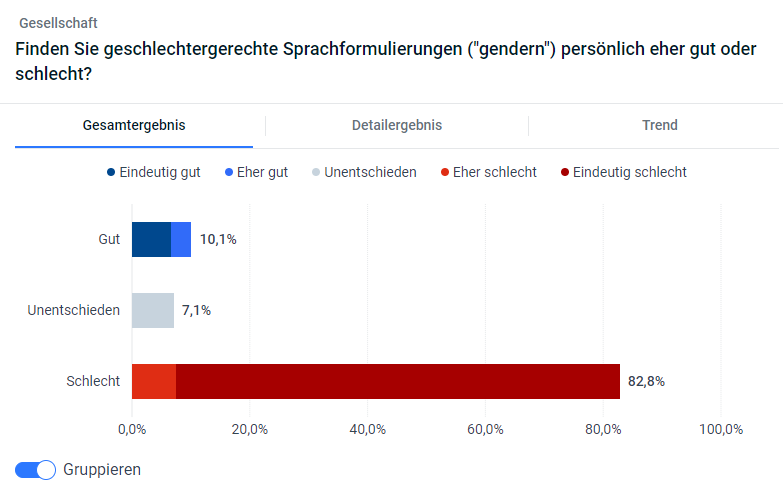 I would comeback to Spotify IF the app uses regular German again (and NOT ideological Gendersprech).

German uses three genders BUT these make NO statements about gender. See in this regard Das Genussystem im Deutschen.

Lately, two well known and recognized organizations gave recommendation who to proceed with „gender dialects“ and both stated NOT to use characters like *_: with reference to non-binary gender, because there simply is no linguistic reference in the German language, which common people here and elsewhere said for two years now.
So Spotify, stop this charade and give us back standard (High) German!

🙂Stop complaining about it and just leave for a better streaming service with normal German language (like Ti....) ! I canceled my sub years ago already only because of this gender sh!t and it wasn't any problem.

Spotify doesn't give a **bleep** about what users want.

This idi...uhm...i mean "General Manager Europe" called "Michael Krause" is not willing at all to change it. So don't try any longer and just quit. It's the only way they will start thinking about it.