This idea could apply to many languages and locales, but I will use the combination I am familiar with.

A large number of Mandarin songs have Hanzi titles and English titles, where the titles are not literal translations of each other. It appears that this data is in fact stored, as you can see in this example search: 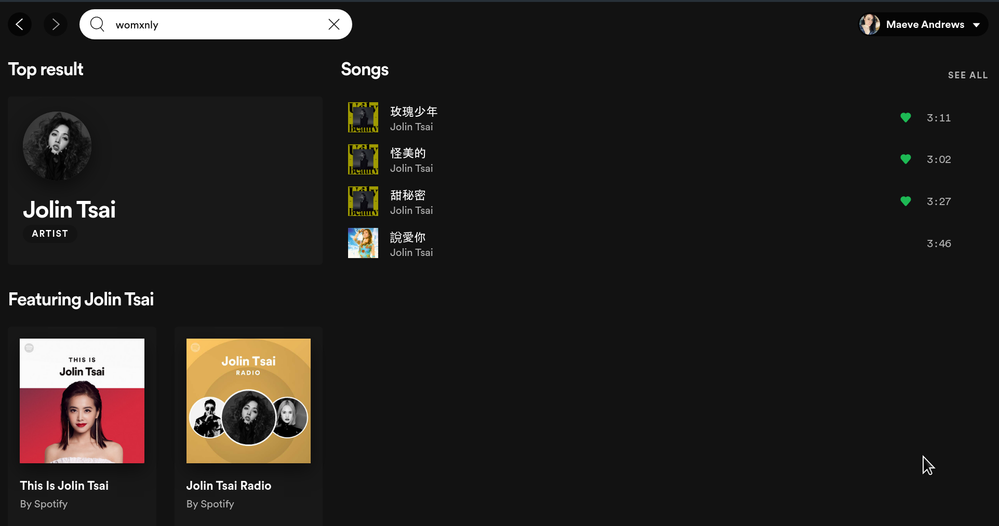 The song 「玫瑰少年」 ("Rose Boy"), the first result, has been indexed for search under its English title, "Womxnly", as well. Please display this official English title! I don't care how it is formatted in the title field, just that it is there.

Conversely, searching for 蔡依林 brings up the same artist entity shown in the above query, which is still named Jolin Tsai, so that must be indexed with both renditions of her name too.

I understand that this data is supplied by record labels and that Spotify cannot proactively ask for it or generate it. I am only asking that the data which does already exist is displayed somehow.

All this could theoretically happen for languages with the same character set, e.g. English and French (don't know about popular music, but there must be film soundtracks where it applies). It may not be common, though.

Note: I am not asking for any sort of auto-translation, or for the gloss of 「玫瑰少年」 up there to be indexed in any way; I'm just clarifying that the original title has a different literal meaning.

Hey!
We've been keeping an eye on this submission for an extended period of time, and it doesn't seem this will reach the votes necessary to put it forward for prioritization.
As such, we're marking this case as closed. This includes any similar suggestions that are received.

If we do have any new information to share, rest assured we'll check back in here with a new status. Have in mind that the idea will continue open for getting votes, so if you still feel strongly about it, continue sharing it with more users.

More information about it can be found here.

Thanks for your comprehension!

I don't seem to be able to remove the "Desktop" tag, but that is just the platform I am on currently. This applies to all platforms.

Your idea has been submitted a while ago but unfortunately hasn't gathered enough kudos. In order to keep an overview of the active ideas in this forum, we will close this idea for now. However, this does not mean that your idea has been declined by Spotify.

If you still feel strongly about your request, we encourage you to post your idea in a little different form again! Maybe now is the right time to receive the support of our community for your suggestion!

I desperately want this feature to be implemented, so we can willingly enable/disable it. Because it's driving me mad with a lot of the Japanese songs I have in my library that now have romanised names, making the titles impossible to read (e.g "bokuradakenoshudaika" instead of simply listing it as 僕らだけの主題歌 - as it was intended).

I'm having the exact problem as the person above mentioned - it seems that spotify chose to translate/romanize ALMOST ALL of the Japanese songs overnight for no reason whatsoever.

well, technically I understand why they did that - it's easier for people to search for romanized lyrics. just please have an option for us to turn auto translations off...

I second this. All the Japanese songs in my playlist got auto translated yesterday, and I'm having trouble recognising songs. Sure, I could change my ENTIRE PHONES language to Japanese, but I shouldn't have to do that just for one app. Extremely frustrating,and I strongly demand that Spotify undo this or implement this feature. Thanks

Showing meaningless pinyin is super annoying. We need the option to show original titles. Or just show both.

The auto localization (translation) of non English song titles needs to have a setting to turn it off. It's super annoying now that so many of my Chinese language songs are now a mixture of pinyin or English translated titles that often have nothing in common with the original Chinese title. Now I can't find songs because I have no idea what their bad English titles are. Please add a toggle to let us turn this off!

definitely agree with the above comments, showing romanised names for the songs is absolutely meaningless and I would say it ruins the whole aesthetic of the songs and the album and the ways we interpret meaning from the title. Having a bunch of messy letters does not help.