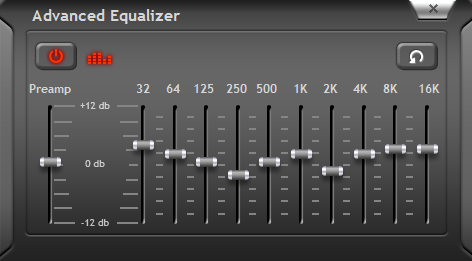 Thanks to everyone for their contribution to this thread. We really appreciate it. In the interest of full disclosure, we’d like to share with you the status of this request.


After serious consideration, we’ve decided not to introduce an equalizer for the Desktop app at this time. As a result, we’ve marked this idea as Case Closed.

Although we appreciate many of you here would like to see an equalizer on the Desktop app, they are in fact used by a very small subset of listeners overall. We’ve therefore decided to focus our immediate attention and resources on features that have higher engagement at this time.

We may reassess this decision in the future. But, for now, we just wanted to keep everyone in the loop. Rest assured we’re constantly working to implement feature requests you make via the Ideas Exchange.
Thanks for understanding, and please keep those ideas and requests coming! Together we can make Spotify the best it can be.
See more ideas labeled with:
Status: Case Closed
5,871 Likes
Comments

I have real issue with this on a mac. There is currently no good "no hacking" solution for system wide EQ on a mac. So the sound quality always depends on the app that plays it. Not to have an EQ in the music app and set status "not right now" is like selling the car with 3 wheels that keeps drivers annoyed on every corner and say that, the 4th wheel is not our priority..  Seiriously guys, as Spotify is  a music app this should have been in the first version. There are like 5 updates every week although the app runs ok anyway. You could direct your resources where it matters because the competitors are not sleeping.

Although i am not to excited to of pay apple rather than spotify but just yesterday I decided to switch to apple music for now because the sound quality is noticeably better. Although  I still prefer spotify, inability to "color" my music and make it sound better on my system or headphones  is a no go for me right now.

And hey, not having an EQ in a music app is just as cool as this line is stylish

Using a DAC for streamed music is like putting chrome on a crumpled bumper. It won't make any useful improvement relative to original CD quality, as the audio is already compromised. You can't undo the artifacts introduced by lossy compression.

You can use good headphones, however, like the Beyerdynamic DT770 Pro series.

I agree to some extent. And I do value a good quality sound without too much modification. And when I want that I put the LP on on my home system.

But on things like streamed music it is the perception that matters rather than a pure technical quality because Spotify is often used in different context. It's like the Apple OS's to prioritize interface drawing which gives an impression of faster computer or phone to the user when technically it may be less capable.

I listen to Spotify when I commute, do sports and at work and often with a decent quality Bluetooth headphones. Mobile apps already have an equalizer and ability to tune down the base a little makes a real difference. When I play the same song from my MacBook the sound is simply not that pleasant. Same song on iTunes sounds noticeably better just because I have an ability to put "a bit of chrome on the rusty bumper". Yes it may still be a rusty bumper but looks nicer if you are not paying a lot of attention to it.

So like many, I am surprised why Spotify did not add such an integral part of any music application. Yes it may not bring the lost data, but if it makes the impression of a better sound- everyone is a winner.

Your are getting obsolete,

Missing equalizer in music app was acceptable maybe in early 90s. But nowadays I cannot really imagine how to racionalize such a functional lack. This is underlined with a fact that everything I play on Windows 8 sounds better than Spotify including Youtube music videos!

There are actually 3 major issues regarding Windows desktop client why I am still deciding if I should continue with Spotify:

I think it is time for spotify to develop real native Mac and Windows apps. Fogive me if I am wrong but so far the app looks to be simply a webView masked as an application. This probably makes it too hard to make things like equalizers because browsers may not be able to access some system services.  It's time for Spotify devs to take this seriously because you cannot compete with the features that real native apps can have. Yes Apple music is not yet there in terms of features and UI but it won't take them long to improve that. So how will Spotify compete against service that has the same content, easier or payment integration (and better price in some cases), features natively supported by OS, better sound quality and even the resources to hire a bunch of people to create great playlists?  With Applefy it only takes a couple of clicks to export all your playlists. Pull your socks up, Spotify, because you are very close to losing me as a paying customer and I am sure I am not the only one.

As several other I'm also looking into the competition now for a solution that has an equalizer built in to their desktop version.

Come on with the EQ already, Spotify.

Don't force the community to go into haywire, crazy mob.mode like we had to to bring back your (ignorant) removal of the Ctrl+F feature in the Desktop app.

Your iPhone app is awesome; why not follow your own good example for the desktop app?

You can set EQ on your laptop if you want.

I have EQ app in Sound card app.