[Mobile] Main Menu as Sidebar and not at the Bottom

Submitted by SchneckiSchneck on ‎2016-11-21 04:38 PM
Why is it now at the bottom below the song that's now playing? It's taking up 1cm of the screen. Now it's harder to have an overview over all the song in Playlists. Please add at least an option to remove it from there! Or at least to only show this bar with a swipe from the bottom up, I think that would be great.
I know I have a big device where it doesn't really matter, but there are a lot small devices out there.
And the new menu is really annoying to use if you are used to other apps.
Please also read the comments below, there are a lot of great ideas 🙂

Your idea was submitted a while ago and unfortunately didn't receive the amount of kudos needed to stay active in the ideas board (100 Kudos per year).

In order to keep the Ideas Exchange clearer I'll close this idea for now, but this doesn't mean Spotify rejected this idea.

If you think this is an idea which needs to be implemented, you're welcome to post it in a slightly different form 🙂

There's more info on how the Ideas Exchange works here.

"You probably don't like the update because its a change to what use to be the quote unquote standard in mobile app design but ultimately I think you will be seeing this a lot more for mobile apps and responsive websites."

Don't make UX changes at the expense of my screen size. Let me worry about how I'll hold my phone and reach, etc. Leave my screen size alone.

Then give an option in preferences to choose the UX you desire. This isn't a leap forward when it uses over a vertical inch of screen space on a device that only has roughly five vertical inches.

The article you reference states that all people are not the same and do not hold their phones the same. In other words, someone with bigger hands will hold their phone differently than someone with smaller hands. This much is true. But what the article misses is that not all phones are equal either. My LG G5 doesn't have physical navigation buttons so the new GUI setup in Spotify only exacerbates my screen size limitations.
There is an option on the G5 to auto-hide the phone nav buttons for individual applications, which I tried for a few days with Spotify, which gave me back some screen space, but I couldn't handle it because in order to see the phone's nav buttons again, you have to swipe from the BOTTOM where the ill-placed Spotify nav buttons are now proudly displayed. So swiping from the bottom always resulted in me hitting a Spotify nav button and switching screens when I didn't want to. Very, very frustrating.
If this is the wave of the future for UX, then I don't want any part of it. I'll do like someone already suggested and permanently turn off updates for ALL apps (not realistic, I know). So give me an option to choose the UX I want that works best for my phone.

cuizable
Newbie
you can disable auto updates for individual apps. that's what I did, and
everything updates, but Spotify. Funny how they still use the screenshots
from the old UX in the Play Store. (at least that's how I see it)

Hey killer...don't shoot the messenger. All I'm trying to do is provide incite being that I am a Product Manager who works in Product and work closely with UX/UI. When they offer solutions, they know they can't make everyone happy but they solution toward the rule not the exceptions and that rule might be the newest trend which could be the considered the global standard.

Is this me, or did they really fix it? 😍

UPDATE: Nevermind, it is still the ios look

I actually support the change - the only problem is taking away the screen size, but being able to see the whole app navigation at one glance is a great thing.

Though I'd like the people with smaller screens to be satisfied too - I think it deserves a look into.

I have to direly agree with everyone. I have my own gripes with the new UI system and I really think they took the fully functional sorting system they had below and trashed it for the clunky menus we now have to partake in when changing music.

I regularly listen to at least 3 to 4 hours of music daily and as such my taste for music gravitates faster than most. I had a system for listening to music that was all organized and I knew where everything was at...

Now I can't properly find my library of offline music that I purposefully saved. Furthermore trying to filter the seemingly invisible library (because they got rid of the album tab) produces **bleep** results because for some reason the filters are out of whack and when I tell it to filter to only my downloads it shows only 2 albums? But I have more than 40 downloaded when I take away the filter?

I agree with everyone that the UI is uber clunky and a 2017 fail but eh the exits out of 2016 were harsh on everyone apparently... 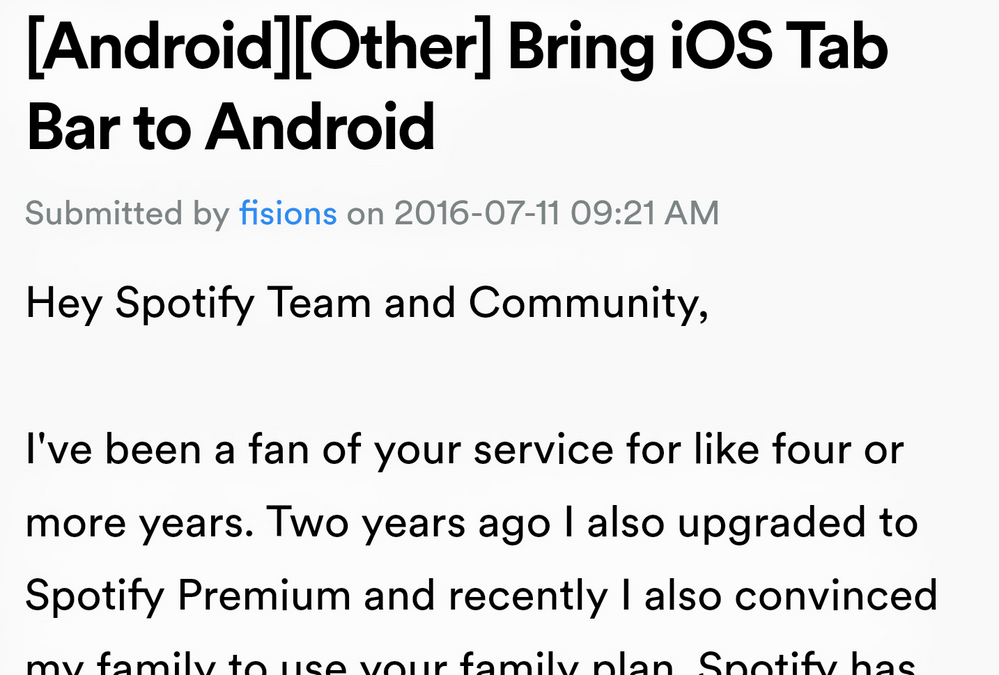 now we know why.

I believe the new UI to be a great idea. It's much easier to access on any phone and it reduced the amount of actions required by the user. Whatever hand you're using it's there, accessible and intuitive.

I actually like it.. It's more accessible. I usually want to navigate through apps with one hand only. Menu at the bottom makes it easier to reach with my thumb. The higher on the screen i have to stretch, the harder it becomes. Previously the library button was pretty high up on the left, thereby harder to reach.. It took some time getting used to having the menu at the bottom, but i'd actually prefer keeping it this way 🙂