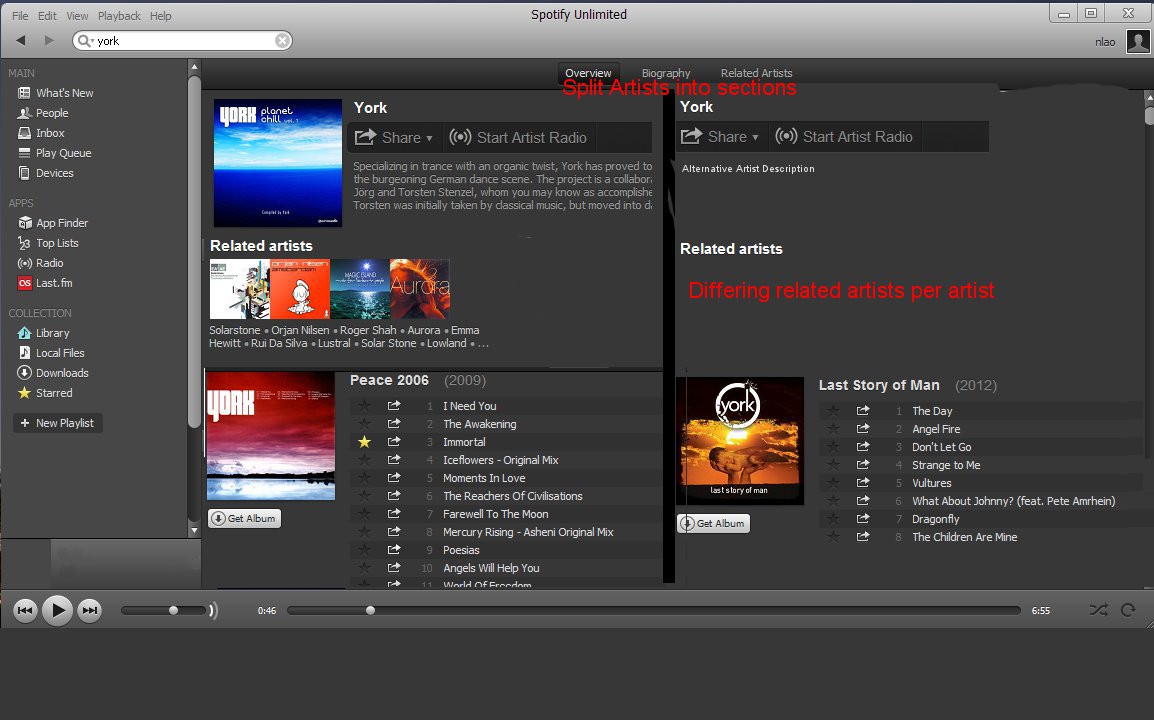 Hey Spotify!! You once said "We have passed this idea internally...." , can you please ALWAYS ADD A DATE when you update such a comment? I think this statement is over 2 years old...

It's beyond annoying now that the Spotify app has moved towards a Pandora model. I understand a business needs to make money via ads, but serve the right songs. The worst is, I can select a band with essentially one album like Operation Ivy, and only get decent songs. I've selected multiple albums, via playlist, worth of the "real"  Blitz. I just get a crap ton of suggested songs. I didn't add these for a reason.  Basically, I'm making lists for a specific band because of a lack of granularity, then getting screwed for it.  I've listened for over an hour, dripping sweat, working on an engine, getting bad song I can't skip, it sucks. I can choose, "Operation Ivy," another semi-obscure punk band, as an example, and just get good songs. There isn't two bands named Op Ivy.  To Spotify's software credit, I don't think it'll willing play a song by eschuto blitz or the **bleep** Dutch 80's synthpop band, (I love synthpop, Dutch Blitz sucks,) to me at this point. BUT, the software is looking to 'BROADEN MY HORIZONS." It either shouldn't try to get names correct, or leave it alone, at least in this case.

BTW, you guys are close to equalling my membership on a popular "free" site that I pay for, and have for a long time.  This **bleep**ed up **bleep** holds me back.

The bands Helios and Parachutes need to be split up. Helios is an ambient/electronic/chill artist, where as Parachutes is an ambient/lo-fi artist. Randomly when listening to either it will dive into some death metal or hardcore techno and it's pretty much the worst. Fix please. Thanks!

Don't know how it's working (i didn't read al th 14 pages of the forum), but a i have an situation to report:

Hey Spotify, month passes after month... you never update the status on this one.

SO WHAT IS THE STATUS? When do you fix this?

I want to listen to all tracks of an artist I follow!

I DO NOT want to listen to all tracks of all artists and bands with the same name of the artist I follow! But this happens when I hit the Play-Button on the Artist-Page (e.g "Paula").

I see this issue exists since 2012 and I can't believe this is not fixed after 2 years!

This drives me nuts. Just had a notification for a new Far album, but it's a French (I assume, could be Canadian I suppose) rapper, not the Sacramento rock band. I don't remember seeing any genre tags on Spotify, could this be one way to differentiate? The MBID someone mentions sounds like a no brainer.

Spotify, we need this seriosly

Searching for one artist, getting multiple artists with same name.. Just make a login for each artist or something to edit for those who want to split ones with same name

This is a major issue that should be addressed.  I'm a premium user.

When I want to listen to Shack, the 90s era UK indie band, I don't want to see some hip-hop artist of the same name come up in the album list.

Why isn't there a way for users to flag these disparities, and why don't you yet have an algorithm to fix these?

Spotify, can you please fix this issue?

I think Bandcamp has a way to fix this, by assigning a unique ID to artists. Maybe you can look into that?