So Spotify for whatever reason decided to make the app as inconvenient as possible. The previous set up before this new update was so easy to navigate, find the artist, songs, radio stations, and podcasts whenever I hit the library icon. Now I have to search for and add all these artists basically all over again and frankly I'm pretty mad about it to the point where I want to cancel my subscription. Whats even more frustrating is trying to contact Spotify themselves so I can complain in hopes of actually getting something done about this is like a game and seemingly impossible to get a direct hold of. I'm sure I'm not the only one who feels this way. Can someone please help fix this? I just want the old spotify back.

Thanks for adding your feedback and votes to this idea. We seem to be getting a lot of different ideas in this thread so we'll try to address a few of them here, but as a heads up we have an extensive blog about the changes to Your Library here.

We wanted to highlight that your Recently Played section can now be found on the home screen. Additionally, it's also possible to sort your Albums, Artists and Playlist by Recently Added. To do so, pull down to reveal the search bar, click the 'filters' options and then select 'Recently Played'. You'll also spot some other filter options, like 'Name' so you can sort your playlists alphabetically.

The update has also brought changes to your Liked songs. Previously this was a section in Your Library, but now they'll appear as a playlist called Liked Songs at the top of the Playlists section for fast access. When you Like or Save an album, we add it to Your Library but we don’t automatically add all songs to your Liked songs. You can Like songs individually to add them to the playlist, or click the ‘Like All Songs’ option in the 3-dot menu to save them all at once.

Whilst not part of this update, we've seen a few mentions about where Radio has moved too. You can find it by going to any artist, album, playlist, or song, clicking the three dots and selecting 'Go to Radio'.

If you have any specific questions about how the new update works, feel free to post in our help boards here.

office@spotify.com
Also, does anybody here speak Swedish??
maybe we can have an open letter translated so that they can’t say they didn’t understand what our complaint was!

Send the following email to office@spotify.com:

Dear Spotify Office/Management,
Please see the following link for context on what I’m about to say:
https://community.spotify.com/t5/Live-Ideas/Your-Library-Bring-Spotify-s-old-UI-back/idi-p/4674895#c...
I wish to complain on behalf of the MANY subscribing listeners about the new UI your developers have formed. It has ripped the heart out of what it means to be able to listen to artists we like or discover new artists because the UI no longer has the ‘Artist’ category. Instead, all downloaded songs are treated as ‘liked’ songs on one giant playlist which we would then have to separate, or simply by ‘album’.
Why is it that developers feel the need to change something just for change-something-sake!? There is no logical reason for taking the artist category away. Do you not think like music fans yourselves anymore?? Since when did you conclude that nobody wants to listen to songs by one artist at a time but prefers having to rifle through a whole albums list to find only one album??? It’s not good enough for paying subscribers who expected the earlier interface they are likely to have had before updating.
Complaint after complaint has clearly fallen on deaf ears and Spotify do not appear to be in tune anymore with what listeners want (no pun intended). Believe me, many like me are this close to ditching subscription to you in favour of competitors.
I implore your developers to bring back the Artist category in an updated UI and/or at least explain in simple terms to me and others here how you thought removing this was such a great idea in the first place.
If it ain’t broke, don’t fix it.
Many thanks.
Kind regards,
Many Spotify subscribers (ask them).
1 Like

ChrisA1999
Music Fan
Daniel EK is the man in charge.

He said in an interview a few weeks ago he wants to 'encourage users to
contact him via Social Media'.

Not tried myself, I'm old school. If I had his email address however I'd
love to ask him...

1. if he reads this Ideas Forum?
2. Is he not bothered that he has so many unhappy customers?

After all for every person that takes time to post on here, there are
thousands more that are thinking the same way!

@son-of-a-flea no need to translate, they are aware of the problem. I posted a comment after the swedish customer service suggested I do so. Like many, I just don’t understand how they could develop such a stupid UI without anyone in the team reacting. Hope they fix it, otherwise I change provider. In the meantime I managed to get sort of an alphabetical order back (see my post).

Hey, just wanted to point out: this UI update makes almost every "deluxe" version of an album significantly worse to listen to. If you don't like the bonus tracks, for instance live tracks or studio demos you don't *need* in your library, then you're just plain out of luck. You can save just the main tracks, in which case the album won't show up in your collection; or you can save ALL the tracks, in which case you're stuck with those extras you don't like when you play that album or shuffle all your songs; or you can create an individual playlist for the album, which is an absurd workaround that shouldn't be required, but you'll still have people defend Spotify by suggesting it's an obvious and easy fix.

ChrisA1999
Music Fan
NOT ONE person likes the change.
Even the someone I emailed at Customer Services admitted they preferred the
old Alphabetical Artist Library User Interface.

They passed my complaint onto 'someone higher up' to for a reply. They have
not! Someone else on this thread also emailed them a week ago. No reply
again!
Spotify and boss Daniel EK are not interested in the comments on here. They
think we are all just adverse to change.

@GrawlixL  I have found only one person who liked the change. Ironicaly enough, he was complaining that his new UI got reverted back to the old one.

No..i am not kidding. That lucky **bleep** haha

I would echo other user frustrations posted here, since I have just moved to the latest app version (8.5.7), namely -

1. In Library, the 'by Artist' view does not correctly sort the artists alphabetically (see photo 1 below). There appears to be no option to change this. I don't want 'recommended artists' in my Library, just the ones that I have already saved.

2. Favourite tracks/artists are not appearing in Library. As you can see from photo 2 below, I have saved the Rob Base track to Library but it does not appear in the 'by Album' view at all

3. There is no alphabet index to the right of screen to allow for easy scrolling through the library

The number one reason for the app existing is to be able save tracks and then easily access them and it appears this latest version does neither effectively. Strange, because the last version worked fine. 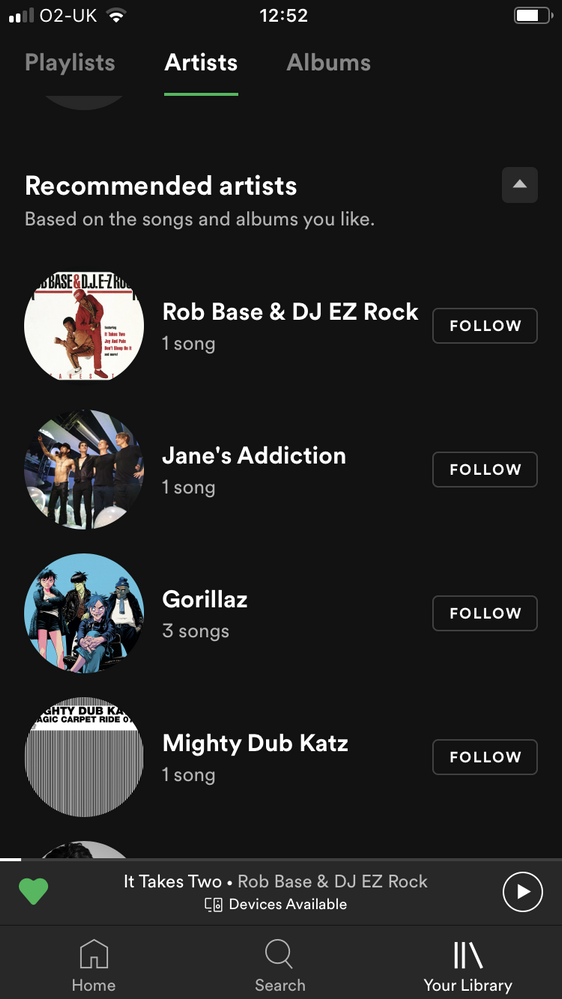 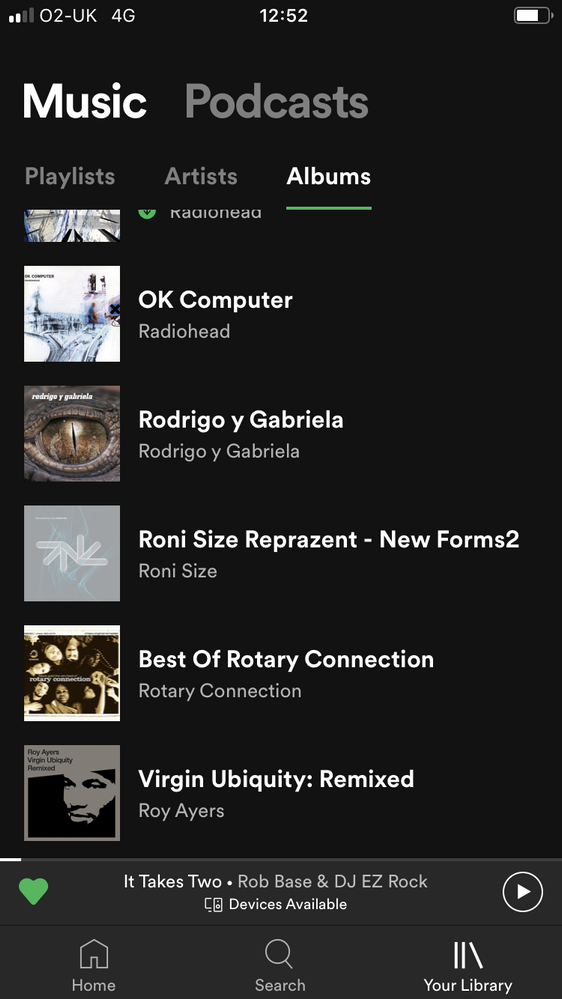 They do want to push 'Recommended Artists' onto you.

This is part of a deal they've done with the major corporate record companies to break new big $$ making pop stars.

Your ears are now controlled by extremely rich and powerful Chairmen and Directors.

Now go back to your device and
LISTEN TO WHAT THEY ARE TELLING YOU TO LISTEN TO!

@DeadjimI honestly can't even imagine what there is to like about the new UI. It's just the old UI, but less, and somehow less elegant because of it. 😐

I'm not sure I follow the theory of how this benefits... anyone, really, whether the consumers or some secret plot between Spotify and record labels. I'm not more likely to check out related artists, but I am more likely, for the first time in all the years I've owned the app, to look at the alternatives. It honestly feels like someone on the dev team is just making changes for the sake of making changes, whether out of pure ego or to justify their own employment.

No joke, the only reason I'm hesitant to move from Spotify is because I got in on the Hulu deal. Spotify is the free but crappy music streaming I get for free with my Hulu subscription.