I'm Adam. You might also know me as Chirpy if you read my blog. (There, that's my shameless plug out of the way.) 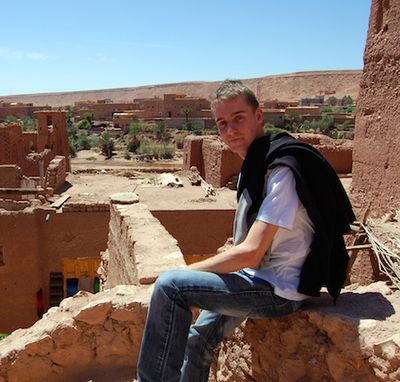 Do that thing where you tell us a bit about yourself. Try not to be boring.

A bit about myself, huh? Well, I really like rice pudding, which was largely borne out of my uni days because it was so cheap and meant I could eat dessert every day. Woo!

Now that's out of the way, time for the fun stuff. Favourite cartoon from your childhood and why?

Courage the Cowardly Dog because it was terrifying and exciting equally, the way all good childhoods should be.

Quick question on a similar subject: Alvin and the Chipmunks. Surely Alvin IS a chipmunk?! Discuss.

Indeed he is, but he also thinks very highly of himself and therefore imparts a lower social status on the rest of the group, hence "and the chipmunks". Plus one might argue that Alvin - A Chipmunk - And a Few Other Chipmunks Too is much less of a pithy title and nobody would bother to watch it.

If my suspicions are correct and time is, in fact, cyclical, which SFW life event do you most look forward to reliving?

The first night of my life I spent away from anyone who knew me, in a town called Oruro, Bolivia. Nobody in the world knew where I was, apart from the Bolivians who were eating in the same streetside restaurant as me, and who were far more interested in the soap opera on a TV above my head than they were in me. Incredible feeling, although I'm romanticising now I'm sure.

Music is everything. Which album changed your life?

Electro-Shock Blues by Eels. I wouldn't say it changed my life exactly, but there are so many times in my life, and people, that I can tie to specific songs from that album, for various reasons I won't bore you with.

What are you most proud of?

I've visited 31 countries across 5 continents. It's become kind of an obsession. Check my Travbuddy map here.

You've travelled quite a bit we hear. Tell us your most uncomfortable, awkward story that wasn't in the UK?

I once couchsurfed with a semi-senior figure at Amnesty in LA. She took me to an amateur-dramatics group she was part of and the staggering amount of melodrama involved was very uncomfortable. They try to act Oscar-worthy for yoghurt commercials.

You're a returning guest on a popular 90's American sitcom, describe your character for us.

I’m a tenured, snooty-nosed, genius-but-bored professor at a university and I play cruel, savage practical jokes on my students. In one critically-acclaimed episode, it's revealed I’m the long-lost uncle of a main character who had assumed I’d died in a plane crash 20 years earlier. Ultimately, the main character makes me see the error of my ways and I become very much nicer.

Grapefruit, but only with a full teaspoon of sugar.

(bet you weren't expecting that answer)

People say to always give 100% when doing good deeds, but now there’s a homeless guy with more money than me.

Keep an eye on the Community Blog for another Backstage Intro next week!

Christoffer
Community Legend
Another joke: Have you heard of 1023 Mb? They haven't had any gigs yet.
3 Likes

Got to give credit where credit is due, these questions are the brainchild of @Jamie