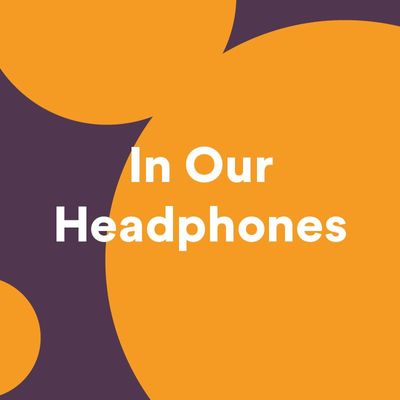 it wouldn’t be a stretch to say that Аutumn is here. Leaves slowly turn a beautiful orange and yellow (at least where we are) 🍂 🍁There is a pleasant melancholy in the air, but it’s not getting us down. On the contrary - we left Summer with a good feeling and we continue into the next season with a sense of a different kind of adventure 🎃 🕺

As always with us is our trusted friend - sweet music 🎶 And we would like to share with you which melodies are ringing lately In Our Headphones.

We shall start with @Elena's musical choice of the month. First one is Infected rain’s Black gold. At the beginning of the month she went to one of the coolest concerts she’d been to in some time. They were the main band, but she was also impressed by the bands they had chosen to open for them.

This is a War from Gwendydd also caught her attention:

“Absolutely amazing female vocals and impeccable instrumentals from both bands - just give them a listen if you like heavy music, I promise you won't be disappointed”

That is Elena’s feeling about the song and after listening to it we also can’t help but agree completely.

Next up are @Lyubka's headphones. Putting them on we hear Ayo technology by 50 cent, Timbaland and Justin Timberlake. Aah the classics!  She just can't stop listening to this song recently.

It takes her back to when she was 10 or 11-years old and her father bought her her first discman for her birthday - and she was the happiest person in the world! She carried it with her everywhere and was listening to this song along with Justin Timberlakes's hit "Give it to me" pretty much all the time…and still loves it!

“This song reminds me of the times when I used to live in Texas and we used to go to a country club every Saturday. My friends tried to teach me how to country dance, but I was so bad at it that they laughed at me every single time. I never learned the steps, but I was enjoying it so much…”.

She kindly gave us her own way to keep Summer in the heart 🌅 💓 With the joyful dance track Taki Taki from DJ Snake, Selena Gomez, Ozuna and Cardi B. And it’s not a secret that she's a huge Cardi B fan 😝

Then came @Kiril with his signature reggae-dub vibes and placed us in a chilled out mellow mood. Last month his Afro-Beat Mojo kicked and here are some reflections from it:

Ghosttown by WurlD is about dipping you in that urban afro-pop bonanza, just let your body sink in!

Thomi Thomas and the dudes from Show Dem Camp are here to take you even further away and give you What You Want...ahhh feels like sipping on sum' fine Palm wine!

And then for an appropriate finish of his Afrobeats flight comes the tune called Anthem and so it is for the gal them and the man them 🙂 Ah yaeh!

Amongst my choices of the month is a proper beat to greet the colder winds. If you haven’t listened to Danheim – you definitely need this mighty Viking rhythms in your life! This ethnic/electronic mixture with punchy drums and tribal chants gets the blood flowing like nothing else and evokes those antient powers inside you! Huah!

But if you don’t feel like taking a trip to Valhalla, I would like to share with you a pleasant dance tune to move your feet to – Get up from Stanton Warriors. The UK never disappoints when it comes to block rockin’ beats.

@Alex on the other hand is vibin' on something that he heard somewhere at random and got stuck in his head:

“I just love this song. It has a really nice beat and flow. I searched for it for months, but couldn't find it until it appeared in my DW one day.”

Luckily we get another Summer memory - fancy by Issac Delusion - the perfect song for a late summer evening.

@Vasil's month has been rather quiet. He mostly explored songs from artists he’d previously liked (and found quite a few). He’s leaving some of them here for any Five Finger Death Punch fans.

We continue with @Jeremy's selection of tracks, which includes Rewind by Craig David and Stay positive by The Streets.

The first one gives him childhood memories. He can't help but remember his summers in London, listening to "the one and only R&B king at that time" - Craig David. He says it used to be a big hit in the UK - and as soon as it appears in his headphones it becomes the same hit as it used to be. We all have our songs that will always be as good as the first time we heard them. For Jeremy this is one of those songs.

The second one he got introduced to when he was watching a movie called "Kidulthood". Here are his thoughts on it:

“So I've been listening to early 2000's music lately. It's a very deep song if you listen to the lyrics, but also very uplifting. Me and my friends used to love this song and it was a must in out MP3 players. Hope you'll enjoy the song as much as I do!” - We do enjoy it, Jeremy! Quite so!

We finish our musical journey with some tunes from @MihailY - who for some reason finds himself strangely mesmerized by banjos, while also enjoying a cool cover of a Led Zeppelin classic.

Hero by Camp Claude takes him back to the office days, when he used to play this track on the speaker at EOD:

“Something about the instrumental makes this the perfect soundtrack for leaving the work floor”.

Well, there you have it folks! Those are the tracks that are blasting In Our Headphones as autumn has us more and more in its embrace. What have you been listening to lately?