Every month the Community Team reviews our Ideas Board. In this blog we'll present some of the ones we’ve updated in the past month!

We just wanted to give you a heads up that a lite version of the Spotify app has been released on Android.

You can check out more information about the app and its availability here.

Please know your feedback is reaching the internal teams at Spotify, and they're aware of the votes around this idea. We'll continue to check out the comments here too.

We also think this is a great idea and we're looking into it further. We've changed this idea to 'Watch This Space' and we'll post here when we get an update.

As many of you have pointed out below, there are tunes on Spotify already in 432 Hz.

Spotify presents tracks as they are meant to be heard by the Artist. As such, we can't implement a feature that would change the tuning of a song for them - as this would go against how they intended their music to be presented.

As a heads up, you can follow these links to find out how to listen to Spotify while you play on Xbox and Playstation.

11. Send a Receipt to Premium Users Each Month

We thrive on Ideas

We're actively bringing your comments and feedback to the teams here so they know which features are important to you. If you've got a good idea, you can submit it here.

Want to help manage the Ideas Exchange as an Ideas Guardian? Read more about the Rock Star Program here.

If you'd also like to see some changes before other users, as well as talk directly with developers, you can sign-up to join our thousands of Beta testers here.

Okay, get this. Everyone is always tslking abount nostalgia. How about a nostalgic timeline playlist that you can go back to a year and see your playlists or liked songs at that point in time.

There is something simularbtonthis already. Go to the spotify app, go to search, next choose made for you, next you see playlists like: your summer rewind, your top songs 2018, etc.

Also if you have an idea, submit it into the new ideas section.

It's been already more than two months that a lot of users alerted you about that catastrophic update.

One could have thought that it's normal that when something changes, some people will be disappointed, that they will complain no matter what and that a few time later they will just get back into line.

But here we are, months later and people are still unsatisfied.

For instance : saving album songs. So now, a liked album doesn't appear in your liked tracks anymore. If you want to save all the tracks of an album now, you have to save each of them separately. You could use a shift+click of course but if you do that, the tracks will be saved in a somewhat random order. Not that I am obsessive with order but most of the time, musicians took time to order their tracklist and I would like to respect that.

I don't think we are asking for something strange. Something existed and was used by a lot of users. And this simple thing is now absurdly complicated (having to save each track backwards in order to have them correctly in your library is completely irrational for a streaming app).

So please, consider what we've been telling you for the past few weeks and do something in the next update.

I don't understand the order problem. I'd propose to only save the album and then play the album, that is the correct order. There's no relation between liked songs and album. You can like all songs of an album or only a few or non, but there's no album order.

There's no relation between liked songs and album anymore*

Before this update, if you clicked "Save" on an album page, it was saved in "Your albums" and each track was saved in your library. In one click you had everything. 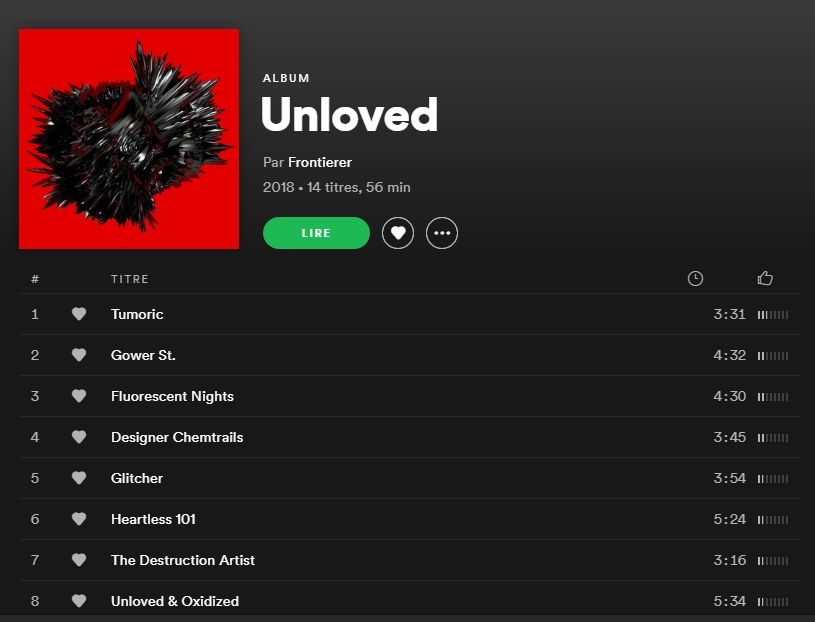 Order in my library

Well, that's the whole purpose of a library: to have all the albums you love and the ability to play them in order or in shuffle.

In the album tab, I can only listen to one album. When the album is finished, similar tracks are proposed, not another album of yours.

The main purpose of the liked tracks - to me -, is the ability to randomly listen the tracks from the albums I love.

If I want to listen to a whole album and then automatically another, I can.

If I want to listen random tracks from those albums, I can too.

From the album tab, all of the above is not possible.

Hope I was clear enough,

What you want is it similar to this?

Unfortunantly the status of this idea is: not right now.

First of all, thank you for taking your time for this issue

Maybe I am not clear (the fault may be on my non-native english), but it is actually not the same thing.

I don't necessarily want full albums to play after one another. I just want the old system back, where you can save all album tracks in one click. By doing that, your library is made of all the tracks of your favorite albums and you can play them on shuffle at will.

Maybe my use of the library is strange, but I know I'm not the only one.

Having all the tracks in one place gives you the comfort to either listening a full album or to play all of the tracks from your albums on shuffle (what you can't do anymore).

Did you know that an album has the option: like all songs? So tab the 3 dots and you see the option.

Unfortunately there is no such option 😞 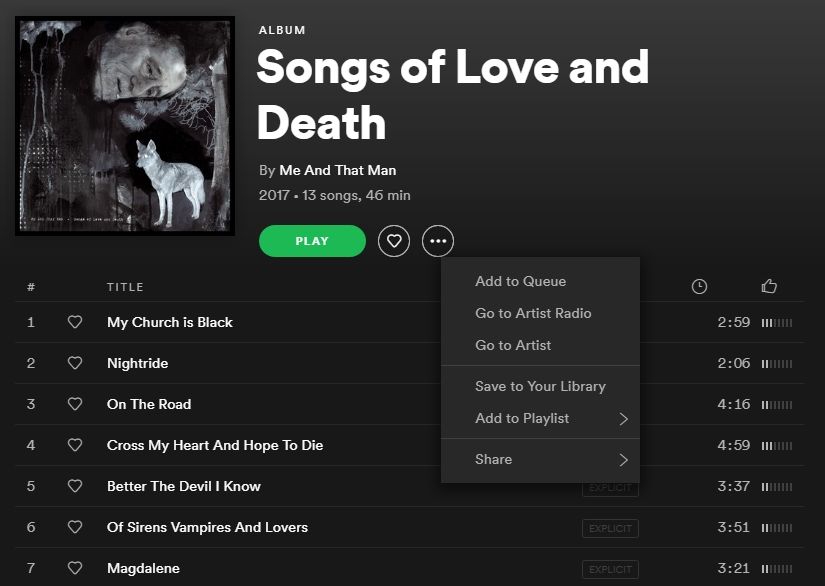 You are right, it's not available on desktop, only on mobile. However it's quite easy to select all songs on desktop by using ctrl-A and then select: save to your liked songs.

Yep, I know about that and as I already told you, when I do that, songs are in a random order (see 8 messages above, with the two screenshots).

Believe me, I tried everything and this update is just a big step backwards.

So it's about the order. You can add all songs of an album to liked song easily but they are not in the album tracks order indeed. You could submit a new idea for this.