Every month the Community Team reviews our Ideas Board and highlights the statuses we’ve updated in the past 30 days.

Below you can find the statuses changed last month. For more information read: Idea Exchange: How your feedback reaches Spotify”.

Here's all updates for October:

Definitely Octobers most popular Idea. Get your party hats on but behave!

5. [All Platforms][Your Library] Increase maximum Songs allowed in Your Music

Definitely one of the most popular ideas out there. We are still looking into this. Don't forget to leave a vote if you haven't yet and are interested in this idea.

October's most popular idea we marked as Not Right Now, but not to fear, you can still vote for this (or any other idea in this section). We will revisit and reconsider these ideas in the future.

15. View & Play local Files on your Device directly in Spotify

19. View how many times we streamed a specific Song/Artist/Album

We thrive on Ideas

We're actively bringing your comments and feedback to the teams here so they know which features are important to you. If you've got a good idea, you can submit it here.

If you'd also like to see some changes before other users you can sign-up to join our thousands of Beta testers here.

They wont let me post any ideas, it keeps saying error. Saying that I havent filled in all necessary areas but I did.

Hey there @hannahbanane - thanks for posting about this 🙂

It sounds like your idea might be missing a platform or a category from the Ideas Labels. If so, all you need to do is click the right platform and category in the Idea Labels column on the right to properly label your idea. 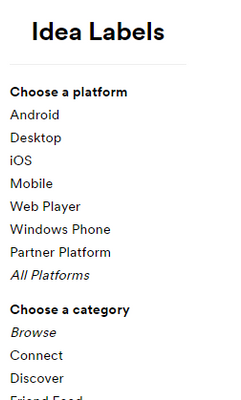 If that still doesn't do the trick, it'd be helpful if you could add any helpful details, like a screenshot of the error message you see in the related Help Board. We'll be happy to help further!

I believe this is a dope idea. I love the fact of the Spotify is giving out rewards this up coming year!

New user. Unable to solve tech problems. No support anywhere I can find. Unable to post problem to community because I do not have PHD in computer science or the money to get one. One inch away from giving up oh this very poor app.

Hi Community !
I am a Rookie on this Board and I hope that my posting in not off topic here.
If it is - "sorry for that" !

I listen Audio books via Spotify - every allmost evening.
And of course I listen music mainly.

My Problem is now, that Spotify provide me Music Mixes with Audio book Chapters as well.
So that means the music flow is extremly interrupted from the Audio book parts.

I would appreciate to enjoy the "Spotify Music proposal without "Storyteller interruptions".
tyvm
Stormrater

How about an ACTUAL Changelog? Too much trouble?? The "we're always improving..." just doesn't cut it.

Is there like a mini player feature that takes out the unnecessary information and just shows the track info (time,artist,album...etc)

Currently, when you login to your account and navigate to “Offline Devices”, Spotify displays all our devices as “iPhone”.  So if you have a laptop,  iPad Pro, iPhone 6, iPhone 7, and an iPad Air as offline devices, there is no way to tell which device is which.

I have the maximum of five (5) devices attached to my account (two iPads, two iPhones, and one laptop).  When I upgraded my wife’s iPad recently, there was no way for me to distinguish WHICH device on the list was her old iPad, since they all show up as “iPhone”.

As a result, I had to remove all the devices and add the current 4 back in in addition to her new iPad.  That resulted in having to download all the music on all the existing offline devices once again.

It would be great if the Spotify Tech Team would allow us to rename each of the offline devices so we can identify them (“iPhone 6”,
“iPhone 8”, “iPad Pro”, "iPad Air", etc.).  That way, when an older device is removed for a new one, it would be easy to distinguish which device to remove from “Offline Devices”.

It would be great if we could change a playlist picture from our own mobile device!

I am not sure if this plea for help is going-up in the right place - but this community format has now been changed and makes no sense at all (makes it very hard to navigate and interact with).  You almost sense that the last format was too successful and too many people told spotify what they thought of it?

We all know that the smart thinking that makes spotify work aint so smart.  Many of my problems would be solved if we had the much vaunted 'forget this artist option'.  I read that it has been implemented for everyone (all users) but I will be dammed if I can find it!  There was an opaque comment on this forum about 'go to pages' (whatever that means / wherever that may be) and another in the help section about click the menu option and just select 'do not play this artist'. I have yet to find anything that looks like 'forget this artist'.  I use spotify premium on iPhone  and have even had a look around on the desk-top but nothing has popped-up

What am I missing - help me out folks!

I might respectfully suggest that your smart algorithms might have identified that when I click on the 'don't play this song' icon every time I hear any song by a particular artist that this might be a clue to stop playing songs by that artist?  Turns out no!

As they say 'artificial intelligence is no match for natural stupidity!'

Glad everyone else is struggling with this, absolutely terrible...

If this isn't the right place for this, I apologize, but I can't seem to figure out where I can actually ask a question so this was my best bet.

Up until a few weeks ago, I was able to use the 🚫 feature when listening to playlists created by other people. It was great, since there are usually a few songs that I'd prefer not to listen to on a playlist, and it saved me from having to use a "skip" when I wasn't a premium member. I've noticed that the option to "hide" a song is now gone and I'd like to know if this is a permanent thing? This was such a fantastic feature, and I don't see how it could have negatively impacted anything given that it wasn't actually taking songs off of playlists - it was just letting listeners adjust the songs that they wanted to hear.

What metrics do Spotify use to carry an idea forward, is it literally the amount of upvotes it gets or some other method.

And on the ideas that get the "we are not considering this at the moment" it would be nice to give an explanation as to why, ive read at least one good ideas today that was detailed in its approach and it was marked as "not being implemented" but with no explanation as to why.

can you please add an option where certain music/playlists don’t affect your ‘taste’ or discover weekly because i listen to a lot of ambient music when i go to sleep and because i spend so long listening to it all my wrapped playlists are that type of music and recommendations rarely have what i actually enjoy listening to during the day. if you could add a sleep option it would be really good

I dont mind often played artists being at the top of my library, but i'd love if my library itself could go back to being in alphabetical order. I cannot find artists that im thinking of in the moment and i get frustrated and use youtube instead. Without being able to find artists and music in my downloaded library quickly, i have no use paying for this app. I could just youtube the songs i want to hear in the same amount of time it now takes me to search through spotify but for free.

danee8
Visitor
Option to 'lock to this device' while music is playing.
This is an old request.
https://community.spotify.com/t5/Closed-Ideas/Desktop-Connect-Option-to-lock-to-this-device-while-mu...
Firstly, I think that the voting of 100 uptick or requests for the same thing is unreasonable.  Most people like me do not even know about this forum. Please spotify change the numbers to a lower more reasonable amount.
Secondly, this request is reasonable as the Spotify on our Tesla takes over all the time when we are playing on our other devices. We would like to be able to lock the device to our computers at least. A simple flag and decision in program is all that is needed. 2 lines ? I am a programmer.
Can you please see the old link and redo this request. Even more devices now exist then in 2017 and it makes me want to consider a different music playing service when everyday we come in from the Tesla then have to keep switching our players on the computers and devices. In the car we do NOT stream from our devices to the car as most other owners I am sure. I AM THINKING that this also drains the Tesla batteries. Please. I will inform the car company also. thanks
0 Likes

Has Spotify thought of having a cheaper paid for service? For the amount I use Spotify, £10/month is too much so the free acount is a better option but I would consider a £5/month option, the trade off could be limiting the number of streamings allowed, when this was reached the account could revert to showing advertising as per the free account.

Please implement the ability that one can like music via a hotkey on keyboard or via speech "Alexa, like this Spotify song". Gestures & haptics (see Tinder) are hugely important to drive engagement. This is an old evolutionary hack. You totally need this, maybe you don't know this yet. Further, this is so simple, I don't think one should even have to vote on this. Why can I press a button for "next song" but not for "like"? This totally doesn't make sense to me and honestly, this would improve my user experience by a lot.
Your business depends on users discovering music. Lock-in happens when users like music. Your raison d'être is a music concierge service. Liking is the single best way to train my music recommendation AI concierge. Thus, you should make it easier to like music, e.g. via a hotkey.
Isn't this an obvious no cost no risk solid upside suggestion?
Anybody got an idea why this still hasn't happened?
Thanks Spotify for making 2020 the year that we get a hotkey to like music.