I was listening to this track (in highest quality streaming):

It's a beautiful recording rendered unlistenable due to the fluttering sound of the digital watermark Decca (Universal) is using.

I have removed the entire album from my music (a shame) and I realize there are other performances of the same work available, but can't understand why they would ruin a recording like this for the people who are paying for the premium service in order to hear high quality recordings!  How much do we have to pay to hear the original unaltered recording?  I am afraid to even buy the CD or download now because it may have the same watermark applied.

I would hope Spotify will refuse to stream recordings like this, at least for premium subscribers.

I can also confirm this wobbly watermark on recordings of Metallica and Rammstein, it is especially annoying on the S&M album. As a premium user I am very disappointed to get so little trust of the labels that I only get worsened audio material.

Ouch, yes the crowd noise on the live tracks is awful.

Interestingly, the same tracks on Apple Music seem unaffected so it is possible for streaming services to get unwatermarked versions from labels. Not that I’d want to use Apple Music all the time either.

Great to have found this thread as I am observing the degadations for quite some years and now I know its from "water marking". I left Tidal for Spotify and was happy but I find these issues increasingly with Spotify too. Now I understand why.

Clearly I cannot listen to such degraded Music.

Fortuneately in my case only few albums are affected. So I am shocked to read that whole famous labes apply this kind of "protection". This is a shame.

Straming music services is a great tool to get acces to what artists produce.

Deliberately degrading sound quality for paying subscribers is nothing else than fraud. Its also a desaster for the musicians who rely on some income from these services.

richbs
Gig Goer
Matt Montag has done the most work on this issue on his blog and he’s seen some improvement this year:

However, most of the tracks I’ve noticed previously are still watermarked.

I also subscribe to Apple Music, which is inferior to Spotify in a number of ways, but they have recently removed all watermarks as far as I can tell.

Not sure if the labels or the streaming service did this but I wonder if it could happen on Spotify?

Definitely some good news here. In the last week, I've noticed the watermarking has been removed from a number or recordings (not all by any means).

Certainly it is verifiable in  some recordings that were mentioned earlier in this thread—for example the S&M album from Metallica. Listen now and there's no longer that tell-tale warbling in the crowd noise or cymbals. This is great!

A lot of classical recordings (which I listen to most) have been fixed, some on the Philips label, some on Decca and DG.

There are still many examples of watermarking left but you're more likely to be able to find a non-watermarked version of a track, say on a compilation.

Just in case anyone at Spotify or UMG is reading this thread—thanks and please continue!

I am still finding watermarked Albums not only UMG but also Concord group.

Correct me if I am wrong.

Can I ask Spotity to comment and confirm that any kind of marking that results in audible degradation is removed in due time?

As paying cutomers I think we deserve an answer.

You are correct that the Dave Grusin record has the watermarking. That's a shame! There's still a lot of the Jazz and Soundtrack UMG catalogue that needs to be re-encoded or refreshed.

Coincidentally, I've noticed another tranche of UMG classical recordings have been fixed, possibly as of today. These seem to be mostly in the DG, Decca and Philips Opera category. I maintain a list of records that are bad and these are now good, as of today. Interested if anyone else has noted any improvement.

Joerg1959
Music Fan
Excellent improvements.
Keep it up Spotify. I am still to see your comment.
Reply
0 Likes

I re-opened my Deezer account and the mentioned Dave Grusin album is clean there. Same goes for "Ultimate Mancini" which is on Concord Records.

I will check later: 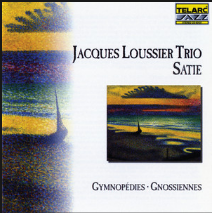 Telarc made famous Records since the 1980s until they ceased operation. They now belong to Concord and I found this album watermarked too.

So its not just UMG. Also Concord is watermarking.

I read with interest your research on the Concord label being watermarked. As an independent label, I was surprised they were suffering the same issue as UMG recordings.

I remembered somewhere a link between UMG and Concord and found at this link their "distributor". Guess who? Universal Music Group. See this link:

This reminded me that when ECM first published their amazing catalogue digitally, I noticed a lot of watermarking. Turns out ECM is distributed by UMG as well, despite being independent:

Here's an example of watermarking from the ECM catalogue:

Blackoutmusic
Casual Listener
It’s sounds beautiful to me but I’m not an expert in classical music! My opinion
Reply
1 Like

I think this is done, finished! As far as I can tell, all the watermarked tracks I had noticed (I had a playlist of hundreds) have been fixed, at least in the UK. I am VERY pleased about this.

Even the track that @Joerg1959 mentioned recently is fixed:

In order to hear the benefits you may need to clear out some old files or try some of the embedded players earlier in this thread.

yes this is fixed!!!
I am happy for you that you finally got your music being OK.

THANK YOU SPOTIFY FOR FIXING THIS!!!

Still There is trouble with the following Telarc Album: https://open.spotify.com/album/1k2n9VELfCoGY4kF4O6NCn?si=Wa1jIkHeQDOUjtE75DkaZA

I did  a random sample of other TELARC music, but did not find further markings. Good to see that not everything is compromised.

Given the recent improvements I hope more and more music is fixed.

Ah yes, perhaps I spoke too soon! I can definitely confirm the issue remains on a substantial number of Telarc Jazz recordings, including the following:

Hopefully, the process will continue in order to remove these watermarks from this catalogue as it has on other Concord/UMG releases.

russellh1
Music Fan
Please check again (remember to clear the cache). All the tracks I've been sampling lately seemed to have been cleaned up! Or maybe my hearing is going.
Reply
0 Likes

The watermark still continues to exist on Vanessa Carlton's "A Thousand Miles" on Spotify and iTunes/Apple Music, even though it was reuploaded on YouTube Music/Google Play.

Also, the watermark still remains on "Team" and "400 Lux" by Lorde, "I'm Not The Only One" by Sam Smith and other tracks that still have traces of UMG/Sony/BMG watermarking.

Other tracks from UMG that used to have the watermark in 2018 started being reuploaded in mid-2019. Wonder why "A Thousand Miles" sounded better on Google Play, and the CD?

russellh1
Music Fan
Does that wa wa wa effect happen on the CD on 400 lux? If so, that obviously isn't fixed.
Reply
1 Like

There is a possibility of UMG’s watermarks coming back for Round 2.

5 Seconds of Summer’s song “She Looks So Perfect” has the UMG watermark on both Google Play and Apple Music/iTunes Match. It is unclear if it was reuploaded on Spotify.

I heard Zedd’s new song “Inside Out” featuring Griff.

But on iTunes Match, both Chelsea Cutler’s “Sad Tonight” from her album “How To Be Human” and OneRepublic’s song “Better Days” from their new album “Human”, released in late 2020/early 2021 have the UMG watermarks, but the watermarks are not present on Spotify.

UMG should have reuploaded its entire library by now.

Vanessa Carlton’s “A Thousand Miles” (Geffen/A&M/Interscope) still has the UMG watermark on Spotify and iTunes Match. It was reuploaded some point in 2017-2018 or 2019 on Google Play/YouTube Music. My uncle has the CD of the album that has the song and I was able to tell the difference between the reuploaded version and the watermarked track on Spotify.