Florida Georgia Line – I've never chosen to play this artist or genre (country?), though they may have once popped up in one of Spotify's playlists. Yet despite 'disliking' their tracks when they appear and blocking the artist in the iOS app (and I do'n't follow them), they *keep* appearing in my Daily Mix and other playlists in both iOS and macOS apps.

'Repeat Rewind' currently has 9 out of 30 tracks by them - none of which I've played before. wth is going on?

Tech support suggested deleting my account and starting again, which is insane – my account has several years' of listening data and the auto-playlists are usually great, so I don't want to wipe that and start again from scratch.

This started happening several weeks ago and is slowly driving me crazy. Is there a paid promotion by this artist to force people to listen to them? Why doesn't the basic 'Block this artist' function work as it should?

Just to make sure, have you tried heading over to the artist's page > tapping on the 3 dots > choosing the option Don't play this?

If so, would you mind sending us a screenshot of how the artist's page looks like for you and other one of the "Made for you" playlist where it appears? Make sure not to send any private info.

Keep in mind that turning on "Don't play this" will block content from that artist across all devices. Note that if the artist is featured in a song/ album from another artist it might still be playable.

The artist is blocked on iOS, but there's no such option or status in the Mac app.

Looking more closely at this today, the artist no longer seems to appear in the iOS app playlists, but is still in the Mac desktop playlists.

Of today's 30 tracks in Repeat Rewind on desktop, for instance, 7 tracks are by Florida Georgia line (plus another 4 by them with someone else) – none of which I've played before (so hardly my 'past favourites'...). Screenshots attached.

On iOS, however, there are only 19 tracks in this playlist – all the ones by or with FGL are missing.

So if nothing else, blocking an artist on iOS doesn’t seem to sync across my devices. But I'd still like to know why I'm being bombarded with tracks by this artist – no single artist appears in my auto playlists this frequently – not even the ones I've 'liked'. 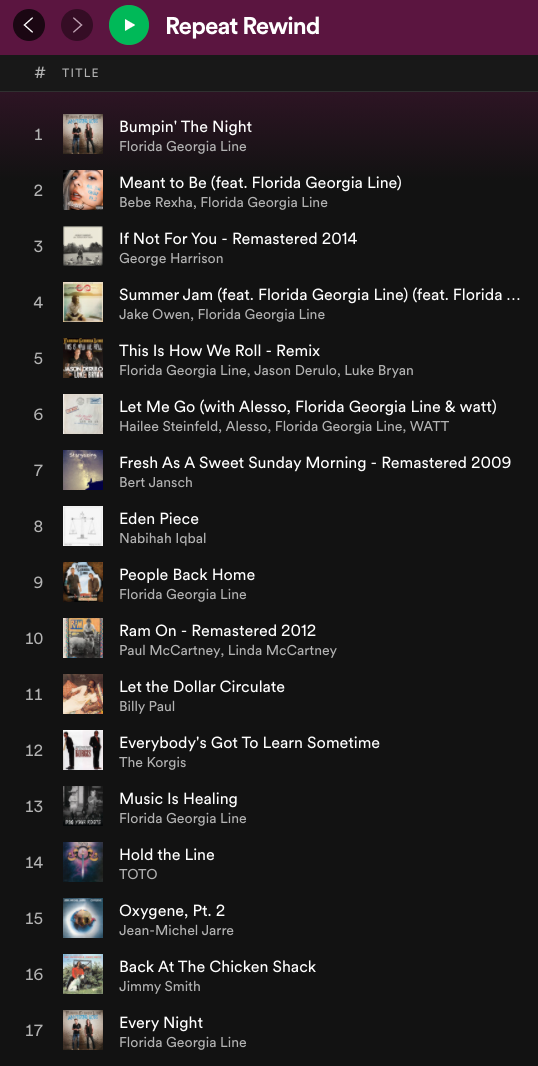 This problem  seems to apply to Windows desktops  as well.  "Don't play this"  isn't an option. It should be.   I enjoy  sometimes getting suggestions new stuff,   but I want to curate stuff like Alex Jones hate-podcasts  completely out of my feed.

Thanks for letting us know that.

@Adlopa, could you let us know if you're able to play that artist's songs in the the desktop app or they only appear in your recommendations, but they cannot be played?

@Ebberley, it seems that some other users feel the way you do and went ahead and posted this idea requesting this feature on the desktop app. You can add your support there by up-voting the idea. We'll inform on any developments there, as soon as there are any.

Hm, interesting – their tracks won't play in the desktop app ("We can't play this until you allow this artist in the Spotify iPhone app") and they're skipped when they appear in a playlist currently being played.

So at least I don't have to listen to this artist (phew), but I'd also like it if their tracks didn't fill large chunks of my playlists. Why are they being included when Spotify clearly knows I don't want them..? (And as an aside, why am I being bombarded by this particular artist above all others..?)

Thanks for your reply and this info.

Keep in mind that personalized playlists like the On Repeat/Rewind, need some time (usually couple of weeks) to refresh and adjust their content according to your preferences and listening behavior. If you're revisiting the list too often, the app will delay the refreshing as it assumes that you're continuously interested in the current content.

Regarding the cluttering of playlists, you could try to disable the showing of unplayable content under Settings on your mobile app. To do so, just go over to Settings and scroll until you reach the section Playback, and there should be a slider named Show unplayable content.  You could use that to toggle the visibility of these songs on and off to see if this will make any difference.

Hope this does the trick for you, reach out if you need more help!

Kiril Moderator
Help others find this answer and click "Accept as Solution".
If you appreciate an answer, maybe give it a Like.
Are you new to the Community? Take a moment to introduce yourself!
Reply
1 Like

'Hide unplayable songs' is already enabled on the mobile app – it looks like it doesn't affect desktop app content.

This has also been going on for several weeks, but I haven't been playing Repeat Rewind in that time – I rarely do anyway, but less so given its current unwanted content. I do obviously view it – how else to see whether it's worth listening to..? Surely that alone can't be considered 'interest' by Spotify?

This band has also been cropping up in Daily Mix playlists from time to time, but there's (thankfully) nothing in those 6 lists at the moment.

I guess I'll just wait to see what happens over the next few weeks, but I'd still like to know why this artist in particular is pushed in my direction...

Thanks for your fast reply.

We believe it's a good sign that the unwanted artists are no longer present in your Daily Mixes and that with time this will be reflected everywhere else on your account.  As to why this artist was suggested to you that often, we really can't say, as this is dependent on your listening behavior. One possible way for you to receive unwanted recommendations is if you have left your account logged in somewhere on another device, where these artists were streamed. To make sure you are logged out from everywhere, you can follow the steps here.

Also if you need to listen to something, that you wouldn't wish to affect your app's future recommendations, then make sure to do that through the Private listening feature.

It's also worthwhile restarting your Spotify apps twice in a row. This may sound odd but it's how the app does a refresh and might clear any cache-related issues that were causing the unwanted content to still be visible.