You have a decent number of IU songs but 1 of her really good album is missing from your list! She has 4 studio albums in total and you are missing out on 1 of them. Could you include the "Last Fantasy" album please? It was released on November 29, 2011. This album peaked at number 1 in the Korean charts and won numerous awards. In fact, the song of the year in Korea ('You and I') for 2011 is in this album and won IU the artist of the year award in the same year. Having it not listed on Spotify is a real shame. I hope to see this album soon.

Spotify tries really hard to get music available on their service, but in the end the availability of music on Spotify is up to the artist and their music label.

This thread by Spotify staff explains why some music is not available:
https://community.spotify.com/t5/Content-Questions/I-want-an-artist-song-on-Spotify/td-p/1136005

Hi, We have the same sentiments. I actually asked them about this but they only answered with the link already put here.I hope they can add this album in the future 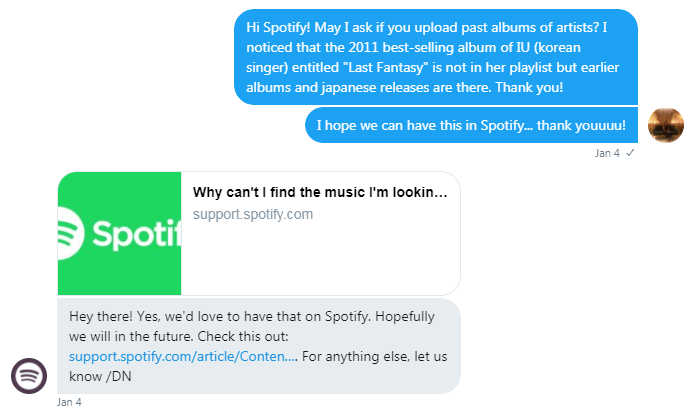