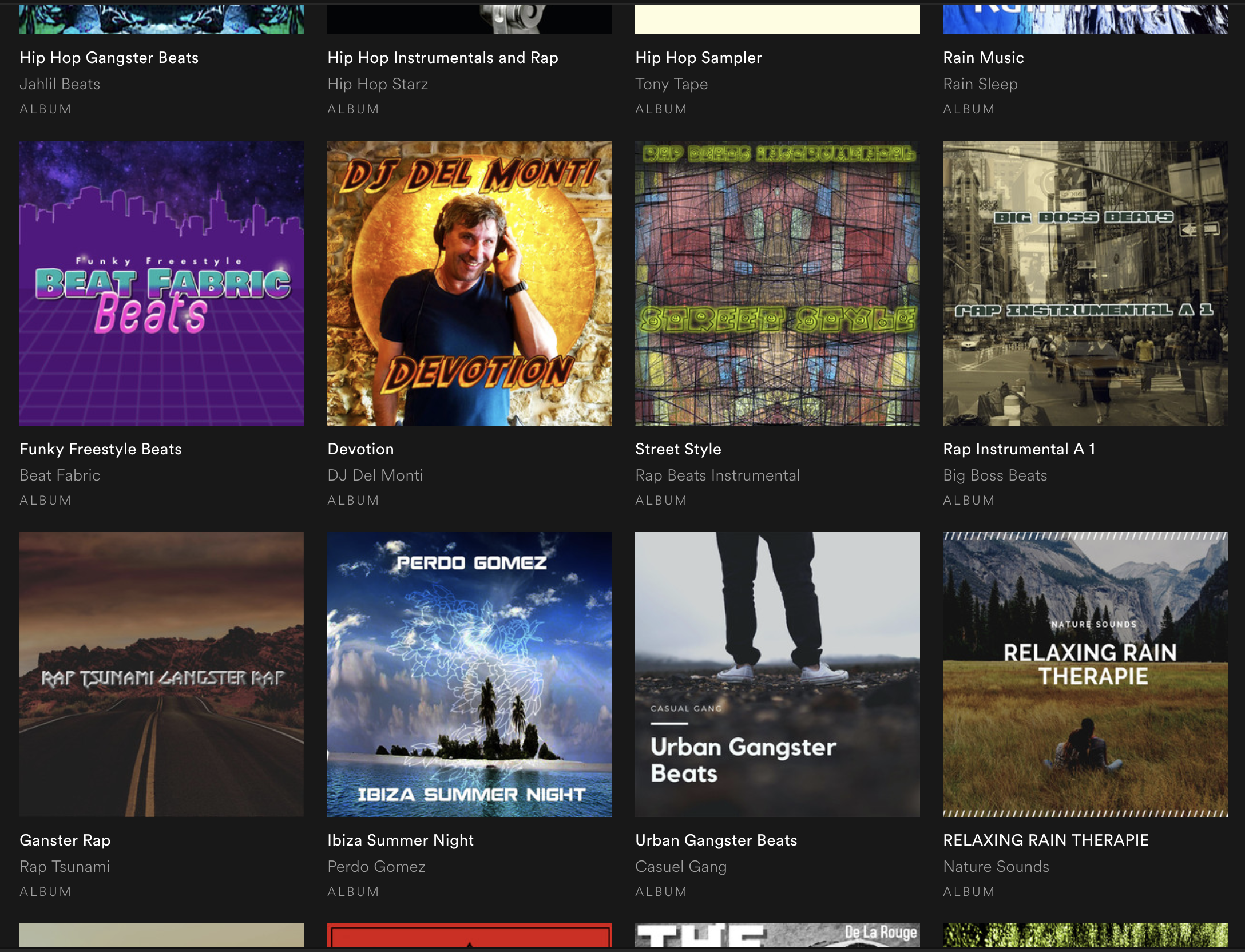 Thanks for clearing up my questions - at least now I know that the only probably explanation of the random stuff appearing in my recently played is that my account has been hacked.

I'll see how things go and report back if Dave Grohl and Lady Gaga won't stop harassing me.

I'm having this issue too. Its randomly following rap artists. A LOT of them, so unfollowing is a pain. I'd like to listen to the daily mix and release radar, but it wouldn't be anything in my range of tastes. I see no evidence that my account has been hacked and I've hcanged my password. Problem continues. There is no way to report a bug, but this is a bug.

The artist being auto-followed for me are not the same as the original poster. It is always rap music, which I never listen to. It keeps following the same rap artists.

mtnbiker8
Regular
Unfortunately, deleting all the unwanted artists and songs is the only
way. Disconnect your FB account if you have it connected.

@mtnbiker8 wrote:
Unfortunately, deleting all the unwanted artists and songs is the only
way. Disconnect your FB account if you have it connected.

Hacking of Spotify accounts is becoming a phenomena. We have associates and clients whose accounts have been compromised. Our advise to them is to keep their account separate from other social networks. For those using Spotify with Hulu, use a strong password. It helps.

So all was going well for two weeks. Opened up Spotify in Windows desktop app and Android phone app and found a bunch of Spotify Playlsts in my RECENTLY PLAYED that I have never listened to... 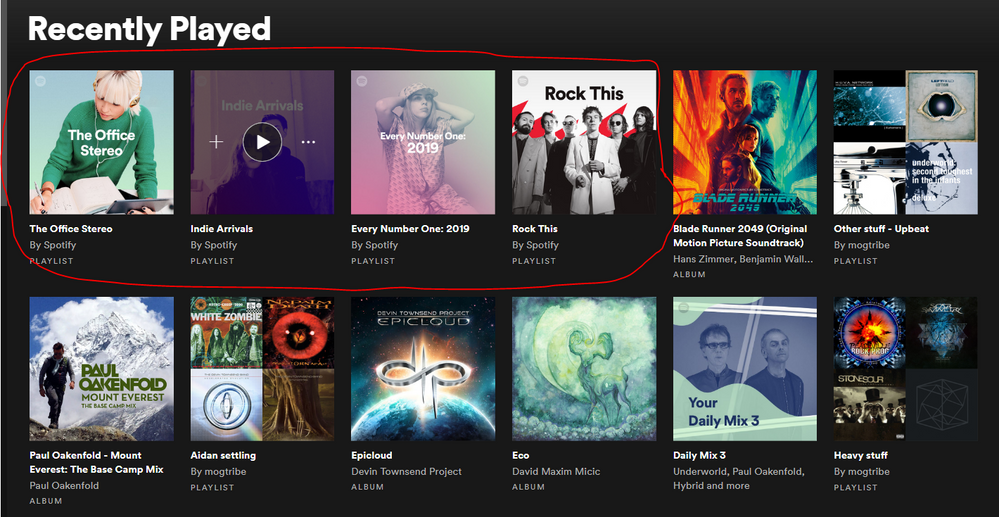 Normally it's Foo Fighters and Lady Gaga... I haven't had these before.

@ Spotify - are you sure Spotify doens't automatically generate these? Is there a way of finding out which devices/locations are using my account?

Surely I don't have to reset all my passwords every two weeks?

Same problem here, had some issues months ago where people would change the songs I was listening to atm to rap. Changing passwords fixed this.

Issues came back now with spotify playing random "fake" music. that seems to be just random musical sounds or music recorded from a tv or game. I believe its just for filler.  The album art looks very convincing though, but once you skip trough them you notice its all very generic.  It really looks like someone is using my account to play random sounds and get paid.

I broke my spotify link to facebook years ago so that shouldnt be the issue. However, spotify was still listes as an app which had acces to my spotify expired, January-2019. Which is weird because I broke that link years ago and I cannot login to spotify using Facebook myself.

Wow good to know I'm not the only one facing this!?

I've have changed my password, and revoked access to all apps. And signed out of all devices. And its still happening!!!

Do I get a refund for this months premium subscription? Because I cant listen to my songs anymore!

Onedrive link to issue below:

Can you PLEASE look into why I keep getting random things in my Recently Played list?

I've changed my password again, for both my Spotify account and linked email account, but I'm 100% confident that my email hasn't been hacked. I've got two factor authentication on my email, and if it really did get hacked then I'd be very surprised if the only thing the hackers did was to use my Spotify account ot listen to Foo Fighters, Lady Gaga and the Trolls soundtrack.

You should at least be able to tell me where and when peope other than myself are accessing my account.

Sorry I'm new to this(made a community account just for this issue), I can't find a comment/add post button so im replying to this. I've already reset my password, but my recently played keeps popping up this "Artomonski6-Artomonski63" playlist with a bunch of songs that have the same titles with different numbers. Please look into this playlist.

Hmmm that’s strange. I would suggest changing your password. To do so, you go to spotify.com on your computer and go to account settings.

I've already tried resetting my password and sign out everywhere. Its still showing up random stuff on my recently played. Do I have to make a whole new account to avoid this, im really paranoid about ppl stealing my account info. Really wish they would do something to address this instead of just keep telling everyone to reset their password.

the playlist i mentioned previously

Ive never listened to any of these artist or even know who they are.

I agree that that is really frustrating. I just wanted to start with the solution and make sure. I believe that there is a way to delete your recently played. I know that that doesn’t exactly help with the issue, but at least it will get rid of that. This would be a lot of effort to do, but you could try making a new account and just following your old playlists from your other account so you would still have access to them. I hope this helps!

mtnbiker8
Regular
You have to delete the songs and artists, manually and unfollow It's a
pain in the **bleep** but it will eventually work.

I was on chat support to Spotify two days ago, they secured my account, changed password again (there's only so many times you can change a password to prove that it's not a password issue), but straight away more random stuff came up.

mtnbiker8
Regular
Spotify has a problem they don't want to admit to. Someone is getting the
money for all the extra plays.

this happening to us, this guy is racking up thousands of plays using this exploit his plays were at <1000 yesterday and now:

SPotify help just rolls out the same..change your password etc..which we have obviously all done and changed password to linked email account..checked for malware etc etc it is clearly an exploit that they cant seem to stop!

I have reached out to a bunch of tech news sites who are following up with this, might actually make Spotify sort it out...

This has been happening to me for about 3 months now and getting soooo annoying. There also seems to be little to no word from Spotify on acknowledging the problem, let alone trying to fix it.

Basically, every time I open the Spotify app on my Mac, on the "Home" screen, the section at the top "Recently played" is full of artists and songs I've never heard of let alone played. There isn't a way of removing them from this section but when going into the actual "Recently Played" section under "YOUR LIBRARY" you can right-click and select "Remove from Recently Played" which you think solves the problem but it doesn't as the recently played section on the Home screen doesn't update.

Seeing as there was nothing on my Mac's local history, the recently played data must be coming from Spotify's end somewhere so not sure if it's cached on their servers or tied to users account history?

Either way, it's a problem that needs fixing. Will give it another few days of trying stuff and waiting to hear from Spotify and it nothing happens I'm off to Apple.