A possible recent upsate seems to have change how things work recently. I can't find a simple way of saving multiple albums in a playlist - so they play in order one after another.

It used to be the case that I could click save on the album, and in my music library, it would apear both in albums and songs. Now, they only apear in albums and all of the albums i had there showed in a full list of every track in album order in the library songs section. What seems silly to me is that it is like albums don't have songs in them?! Why would you save an album which has songs in, then not see them in the songs section.... I now have to manually play the next album.

There are soem tedious ways around it. I can get them to apear in the songs section in album order, but I must do each song induvidually - and in reverse album order! This is beacuse it puts the most rectently added track at the top. I used to be able to just click save on the album and then listen through multiple saved albums in the correct order. But I now have to do it a really tedious way. Then to delete them, you can't unsave the album - that only removes it from the albums section. You have to click the cross on each track. And you don't seem to be able to delete more than 1 per second so it is incredibly time consuming.

Another way of doing it that maybe others will do is by creating a playlist yourself. But the thing is, i don't really think of it as a play list. it is just several albums that i keep changing to different ones. The thing i don't like about adding it to a playlist is it still seems nothing like as simple as it used to be to just click "save" on an album. You have to go to the album and right click, hover over add to playlist then select where you want it. Nothing like as simple as before.

I just don't understand what this "songs" bit is for if the songs from your saved albums songs don't show there. Do albums not have songs in or something?

I will add some screenshots below to help explain more. 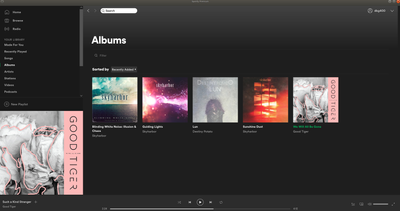 This above shows the albums i have saved. This page still looks the same as it did before i started having issues. 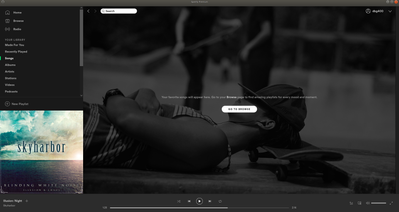 This is where the problem starts. Where are all the songs? I save albums and i have many songs, but they are not here. They always used to be. A list in order of what album was added most recently, but can have hundreds of tracks. 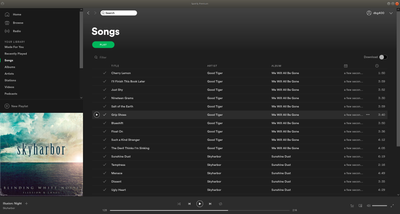 This is a rough indication of what it used to look like. But I had to add these tracks 1 by 1 and it was very annoying to do. I took this screenshot a while ago so i didn't realise that i had to add the tracks from the end of the album to the beggining if i wanted them in order so they are incorrect here.

What i used to have is a simple way of saving multiple albums and listening through them in songs without having to manually start an album each time. Has there been an update recently? If this is the way spotify is staying, then that is very poor. It is very hard to use in the way i am used to now.

If this is actually how it is staying, that is not good at all. I hope there is a fix for this. There was another thread that i took part in when someone mentioned that their artists were not showing correctly. Basically it just sounded like the smae problem i am having, but in my situation, the problem is with albums ratehr than artists. The ones i had saved just went and can no longer save them and have the tracks apear in the same way they used to.