Yet another user having the exact same problem. Archlinux, latest. Was running through pulseaudio channeled into jack2, but even direct to my focusrite, no love. Exact same symptoms. Clearly a spotify issue, as I have been in Windows for about a week playing a game I just rented (a UWP-based game, so no, Proton wasn't gonna cut it), and Spotify worked just fine when I shut down and booted to Windows. Nothing was updated or changed in that time on my end or OS.

I pay for premium, so even though the linux port is 'unsupported' and a 'labor of love', (I totally don't mean this to sound like a "threat" to dump my subscription over this, but just being honest), but I know of a free method to do pretty much everything spotify does (actually technically better, because no DRM and I get to keep my downloaded tracks), but I'm paying for convenience and not having to store/stream my own library. Can't justify paying when the convenience factor doesn't apply anymore... So please fix it, because I actually like Spotify and am more than happy to keep paying for it, so long as it actually works.. Which it currently does not.

Same problem here since today. Spotify doesn't work in the app or web player. I hope it will be fixed, I pay for premium and I can't use spotify now.

Same thing happened to me just now
"Spotify can't play this right now. If you have the file on your computer you can import it."

Very sad when you have to pay for this

I didn't know that. 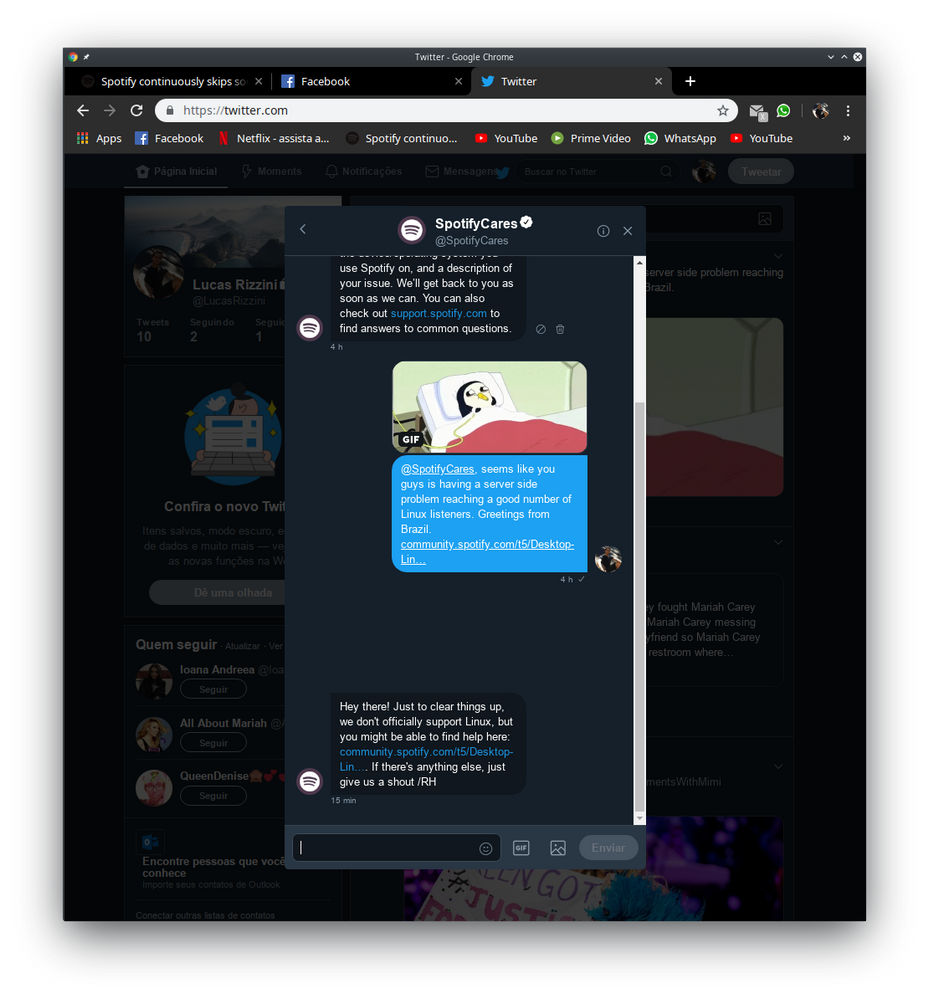 So they "don't officially support linux".. But clearly there's an issue.. Not asking for support, asking for a working product. I guess if this is the attitude they're going to take, alright, I guess "I no longer support Spotify" is going to have to be my response. Again, I LIKE SPOTIFY and want to continue being a subscriber, but if that's the response they're giving to a valid issue, I can't continue to pay for convenience when that convenience doesn't actually exist anymore, and they don't care about fixing it. This isn't a feature request, it's basic functionality that most people here are paying for.

Not asking for much, just release a working product people pay for, and don't blow off paying customers. Seriously. What a terrible response. So much for a 'labor of love'.

If my response comes off as terse, well, it is. I can say it's because I'm paying for a service and not getting what I want, but really, that response above was ridiculous. This isn't asking for support, this is making them aware of and asking them to fix a problem... Only to be brushed off. That right there annoys me more than the fact that the player isn't working right. The response above has prompted me to fix my 'play' database and reimport my playlists there. I'm pretty certain I'm just done with spotify for now. Sorry.

I hope they do something about it...it's a shame since most of us are Premium users.

I understand that it's impossible to "support Linux", i.e. make Spotify work for every assclown with a **bleep**ed up Gentoo Stage 2 install and a super weird configuration.

Still, the Linux app is there to entice us into paying money, with the implicit promise that it will sort of work if you don't try to actively **bleep** it up.

It worked, since most of us on this thread did pay, apparently.

Now you have to keep it working, though.

The update they pushed is quite obviously broken and it's not working for any single one of us.

Fix it, move, hop along!

It must be a backend thing, you would think it shouldn't be too hard to just rollback whatever change broke the linux app until they can figure out what went wrong ¯\_(ツ)_/¯

My friend who runs 1.0.something on Arch has no issue.