I use a Spotify client on macOS Catalina (10.15.2). I recently updated the client to version 1.1.25.559.g85cf5e4c and when I look at the About tab of any artist, there are no data about listeners in the Discovered On section. It works fine in

The screenshots are from my own artist profile: https://sptfy.com/fencer 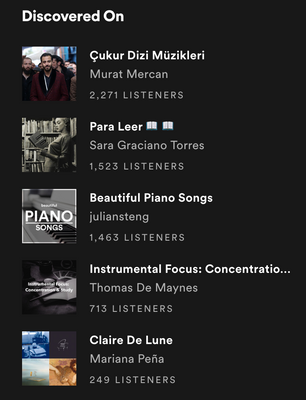 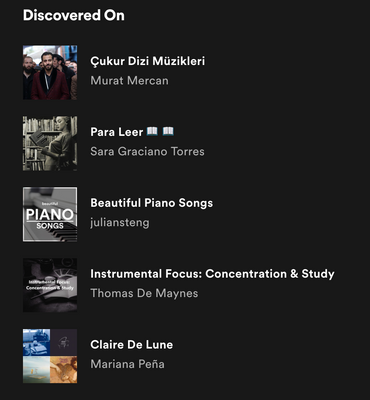 Is it intentional or just a bug?

We're currently aware that some users are experiencing such issues after updating to Mac OS Catalina. We suggest you go to this Ongoing Issue and add your vote to it by clicking on the +VOTE.

It'll also be useful to subscribe via the three-dots menu in the top right corner next to the title. That'll make sure you stay up to date with any relevant updates about this.

Ivan I don't think it's a Catalina issue. As I said, the previous version of Spotify client (1.1.24) runs on my MacBook (with macOS Catalina) and I don't see any problems with missing numbers of listeners there.

CzechFencer
Composer
OK, that's what I thought. Thanks for your response.

you’re destroying opportunities for artists to get heard. **bleep** you spotify

This is a bad idea. Many curators on your platform used this number to gauge whether their playlists were curated well and helping artists. Artists used these numbers to pre-screen playlists when pitching music to them. You're forcing both to rely on the playlist follower metric, which does not always indicate a helpful playlist, unfortunately. Another example of "don't fix it if it's not broken".

Why the **bleep** would Spotify do this? How does this improve the user experience? This was a cool feature and deleting is taking a HUGE STEP BACKWARDS.

It is a pity, indeed. This feature was very useful for playlist curators to observe how the playlist is suitable for a particular artist. For instance, if the artist's track was added 3 months ago and the number of monthly listeners in Discovered On is very low (or the playlist does not appear there at all), it probably means that people who play this playlist are not too much interested in this song, hence the artist's style.

It would be really cool if Spotify reconsiders this decision.

Jakob_ahlbom
Regular
This is terrible! This feature was extremely useful for artist to find good organic curators. Please take the stats back!
Reply
2 Likes

OnesZeros
Casual Listener
Absolutely agree. It's a total mystery why would they even consider removing this statistic.
This was THE ONLY WAY to see if a playlist which you're considering for placement has actually any REAL listener counts behind them.
As we all know, playlist followers can be simply bought on the black market - but one could easily see how many ACTUAL listeners this or that playlist can deliver. So why would they make it EASIER for artificially 'boosted' playlists to survive??
This is not in the interest of Spotify and the community, for sure. Any chance this might be reconsidered, I wonder?
Reply
0 Likes

Maybe that is exactly why they did it? The "artificially boosted" playlists and artists are running rampant on the platform.

The past few weeks, I have seen dozens of playlists that generate 2-3 times the amount of listeners than way bigger and official Spotify playlists. LOL

Some artist profiles contained 4 fake playlists out of the 5 listed under "discovered".

The fake plays have been a growing concern for Spotify (and other platforms) because it simply doesn't look good to advertisers and investors alike.

This latest change makes life more difficult for artists and playlist curators.  I truly can't think of -any- reason as to how this change would benefit listeners, artists, or curators.

OnesZeros
Casual Listener
I saw yesterday evening that playlist listener stats somehow got back to their proper place...... And were gone again today. False hopes!
I guess we'll proceed with trying to get on big independent playlists blindly now. Sadly, the days of platform transparency are now fading and it's not a good thing - especially for us, musicians.
Reply
1 Like

Just want to chime in and say that while there have been lots of stupid changes over the years, this is by far the dumbest and most unnecessary update I've seen in my 4 years as a premium member. As someone who makes playlists that feature obscure and nearly forgotten artists from the past, those numbers were invaluable in letting me know how many people were listening to certain songs and which songs they were most likely to skip. It's even helpful in letting you know whether people are listening straight through or shuffling.

What possible reason could there be for making this information private? And even if you're determined not to make it publicly available to everyone, it should at least still be available to curators and makers of public playlists, not just to artists. This really pisses me off and makes me not want to bother even making more public playlists or engaging with the platform at all. I'm so sick of unnecessary "fixes" for things that weren't broken to begin with.

DutchieDJ
Music Fan
As you can see from my words above, I echo your sentiment.

Regarding new playlists, I think it is too late in the game to get any substantial traction unless you have a massive following on social media that you can mobilize and even then big name brands are struggling.

Of course, the platform is running rampant with fake playlists that not only purchase fake followers but also fake plays. In some electronic music genres I have seen fake lists that grow over 1000 followers each day (consistently) and generate 2-3 times the amount of plays that official Spotify playlists muster. Some of these lists have 15 tracks, don’t bother using keywords in title/description and yet grow at ridiculous rates.

Frankly, if the so-called algorithms can’t even catch these blatantly obvious fake playlists then I doubt there is an algorithm for this at all. I have seen a playlist grow from scratch to 50,000 followers within a single month while only offering 12 tracks and that in a relatively small music genre.

Some of these lists won’t even be tackled after I reported them and was promised their team would look into it.

Spotify has been expanding on its own official playlists and, as a result, is driving independent curators off the platform. Growth but more importantly listener activity has seriously been diminished, exceptions aside. Big, established independent playlist will be OK, or playlists that can be considered niche enough where Spotify is not offering an alternative (yet).

It is essential for Spotify to have a firm grip on the listeners, no matter the genre, because it is directly linked to their advertisement and promotion. Whereas “payola” (paid placement) is not allowed for its users, Spotify isn’t exactly hiding the fact that it is a big part of their income.

Artist/labels/advertisers seeing suspicious activity (because it was so obvious in the Discovered On section) isn’t something they want, of course. And then knowing that either they refuse to commit or lack the resources to even put a dent in this fraudulent activity, it is best to “hide some numbers”. If I know of the existence of at least 10 fake playlists for a small genre, you can imagine what it must be for huge and lucrative genres like Hip-Hop or Pop.

Again, there is no way Spotify can give that recent change a positive spin for ANY party involved. It doesn’t help artists, labels or curators. It only obscures reality enough to fool advertisers or people willing to throw money at paid placement.

This is a very thorough reply and I totally agree with your assessment of the situation.

The only question now is - what's next? Is "Discovered on" also going to be removed?

There's a high probability for such a next step, I would say, given the situation.

DutchieDJ
Music Fan
I don’t think they will remove the ‘Discovered On’ section any time soon. For the biggest genres, virtually all artists are “discovered” on official Spotify playlists and I can see how it could generate (even) more interest in those playlists.

I think that originally the feature was really aimed at independent curators/playlists as a way to give their playlists more exposure and a bit of a “reward” for featuring smaller artists. In my opinion, back in the early days of Spotify they realized that the success of the platform would partly be dependent on the concept of user-generated playlists. Besides listening to music, people simply love playlists (whether to create them or follow their niche music). There are over 3 billion playlists.

Spotify used to entice independent playlist curators with certain benefits, e.g. Tastemaker tags, Discovered On, and so forth. Remember the days that you could send messages in Spotify, or you could get notifications when a playlist received new followers? That is years ago...

I strongly believe that the independent playlists were a driving force behind the growth in subscriptions and the lack thereof the reason why some other streaming services lost ground. (I tried Apple Music, Deezer and Amazon but gave up for that reason).

The moment Spotify feels that it “can do” without the independent curation, they will ditch those features within a heartbeat.

At the moment, Spotify is far from that. The numbers they publish might sound impressive but it isn’t impressing investors (also witnessed by them recently getting downgraded by big investment companies). On top of that, Tidal and the upgraded Amazon Music offer music streaming at far superior quality than Spotify, and they artists/labels a lot more in regards to royalties. Especially Amazon is a huge force to be reckoned with as they linked it all nicely up to Prime memberships (discount offered).

The moment the Amazon subscriber base starts putting a serious dent into Spotify’s numbers, it will put a lot of pressure on Spotify. Spotify can only stream music if they have deals with the major record labels. Amazon pays a lot more in royalties but is lacking the listener base for now...

To make a longwinded story a bit shorter, you would think that Spotify would try to avoid frustrating the curating community.

This is so unfair. there are playlist charging 200€ for palcements with barely 1% of engagement on their playlist and now I won't even be able to check their monthly listeners, before they still my money with fake followers and price lists. I mean what the **bleep** are you doing? You wanna **bleep** the artists? WHY DID YOU TAKE IT DOWN!!!