Other Devices item missing from Devices Menu on Mac version

Other Devices item missing from Devices Menu on Mac version

Can anyome confirm that Other Devices is missing from their Mac installation?

I contacted Spotify Support via chat and they had me try some things before saying "reboot everything and then contact Apple if it still doesn't work." But they never actually confirmed for me that it SHOULD work. I don't think they really tried it on a Mac to see (they probably didn't have any Macs) so I'm still not sure if this is a glitch with my system (seems unlikely, especially after troubleshooting, reinstalling and rebooting eveything). What seems more likely is that they removed the feature or there is a bug that is preventing the Menu Item from appearing.

Does anyone have any thoughts? Can anyone confirm that this does or does not work for them with latest version of Spotify?

The first screen shot show the devices menu on the Mac and the second one show the menu on iPhone. 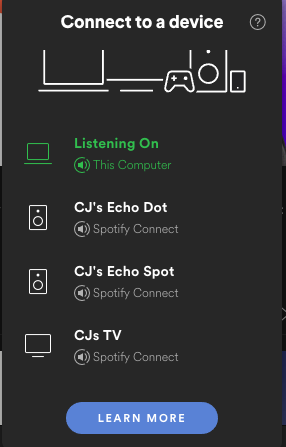