Why is the desktop app for Mac so incredibly slow?? The app itself starts up no problem but when I try to search for anything it can take anywhere from 2 - 10 minutes to load. The buffering wheel is in motion and shows that it's working but it just takes so long. The app works perfectly on my phone. Is this something other people experience or am I doing something wrong? I tried deleting the app of my mac and re-installing just in case I had an outdated version but there wasn't any change in speed. 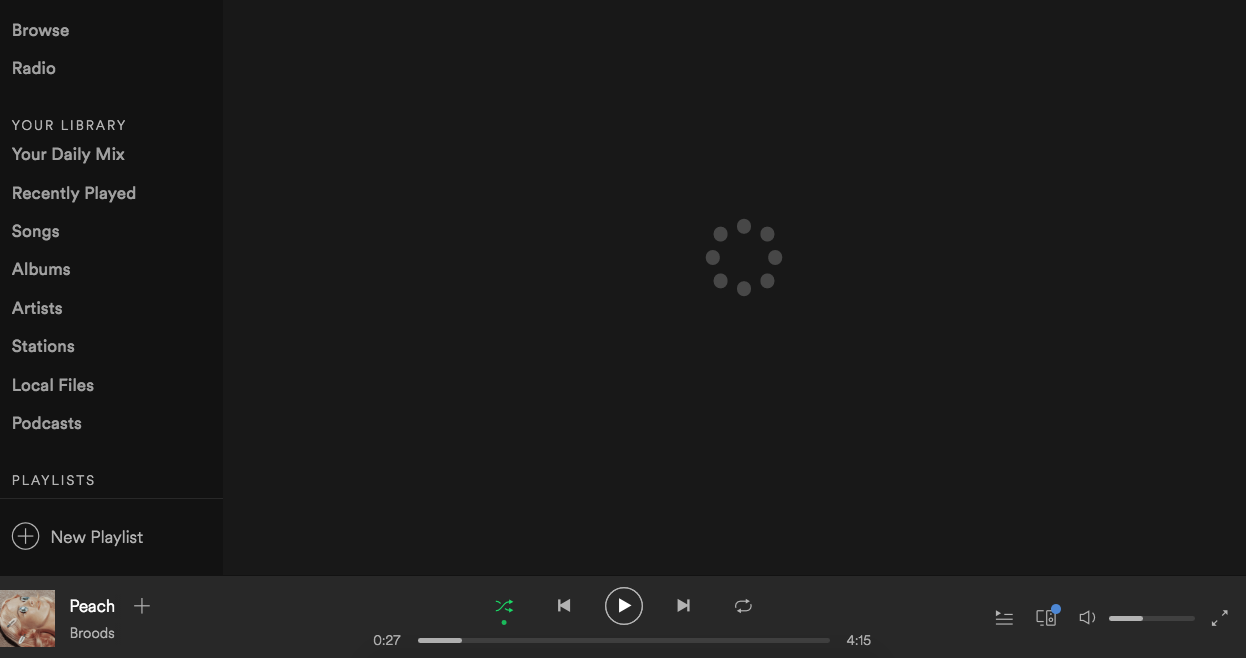 I know it sounds simple, but it's often overlooked. Could you try restarting your device? If that doesn't help, try a quick clean reinstall of the app. Just follow these steps.

I'll see what I can suggest next!

LoxerSpotify Star
Help others find this answer and click "Accept as Solution".
If you appreciate my answer, maybe give me a Like.
Note: I'm not a Spotify employee.
Reply
3 Likes

It sounds like an issue with your computer.  Check how much storage space you have. If you have a lot of different applications running it may be bogging down the speed of Spotify.  Also try switching to offline mode just to see if that helps.

This is a right PITA and has been going on for years. I've followed every instruction I've ever been given or found and nothing works.  When ever there is a new version, it cures it for a very short while and then goes back to being a snail.  It can take so long to initiate at times that I could go off and make a cup of tea before it had finished setting itself up. The search function is either fast or virtually non existant. This has been over two macs, a Macbook Pro and an iMac, and various incarnations of OSX, currently High Sierra on the iMac. I've given up now and just let it do its thing or switch it off in frustration. The thing is, they've known about it for years too. I wish that instead of introducing new functionality that they would just make it work. Good luck in finding a solution, I never did.

I have never had this problem

I have the exact same problem on mac osx desktop. Can work fluidly some days, other times it will simply not search at all. I have plenty of HDD space, and sometimes zero other programs running. I've tried reinstalling, clearing cache, restarting computer - nothing. I agree with comments elsewhere, there are 'dark forces' at work to cause this. Spotify must surely acknowledge and communicate these issues. Using my iPhone it's never a problem!

LoxerSpotify Star
Help others find this answer and click "Accept as Solution".
If you appreciate my answer, maybe give me a Like.
Note: I'm not a Spotify employee.
Reply
20 Likes

Wow, thank you Loxer, it seems that did the trick - like magic!

Now, why isn't this tip widely publicised by Spotify? Seems so simple.

Thanks very much once again, much appreciated.

indeed what a miracle when switched off hardware accelerator

Thanks very much for your reply. I think this helped with speed a little but it is still unusually slow unfortunately. 😞

Thanks for your reply, unfortunately. I don't think it's an issue with my computer. I have over a 100gb in storage space and no other apps running. Regardelss of which you really shouldn't need a high performace set-up just to run a music streaming app. Spotify needs to sort out this problem that clearly a lot of people are having.

Spotify is just killing the harddrive. Seems like the 2016 SSD killing bug have never been solved, they just told everyone they did. It seems like they just want everyone to use their phone.

I've had the problem for years on more than one Mac. The harddrive just goes on and on when i log in to the Spotify desktop app.