I had previously added an albulm to local files, it worked fine. Now if I try to listen to any song from that album on spotify it scrolls through each song, attempting to play it for a split second, until it goes through all local songs and then says "Spotify can't play this right now. If you have the file on your computer you can import it".

I have moved the folder containing the files and re-named it and re-added it to the Local files "show songs from:" list, I have quit spotify, deleted local-files.bnk at %appdata%Roaming\Spotify\Users\blade4198-user, restarted spotify, the local files were succesfully removed, and I re-added them and it still can not play them.

The files are all .mp3 and have worked previously on spotify, and still work perfectly fine using any other media player.

Bump, uninstalling and reinstalling spotify has not fixed it either.

Have you tried to reinstall Spotify? Also delete the Spotify folder(s) within %appdata%.

Also try to have your local files on your main hard drive. The same drive where you have Spotify installed.

Hope that does the trick. Let us know if it didn't, or if you have further questions

@Guido I've uninstalled/reinstalled 4 times now, made sure every Spotify folder/file in %appdata% is deleted, and (since Spotify won't let you install it on your 😧 drive for whatever reason) moved the music files to the C: drive. None of these fixed the problems, it still just quickly goes through each song and then say's it can't play them.

Could you go to your account page and remove all your offline devices?

Also, does this happen with other local files you might have? Let us know if you can assemble some new ones into a new playlist and download them.

A screenshot would be great here as well.

I just removed all offline devices and nothing changed.

I downloaded some royalty free .mp3, it plays fine using Windows Media Player, but when added to spotify it gives the same error as the other files.

Attached are screenshots of the royalty free music giving the error, the same error with the original local files (Warped tour 2006 compilation), and the spotify page showing their location. 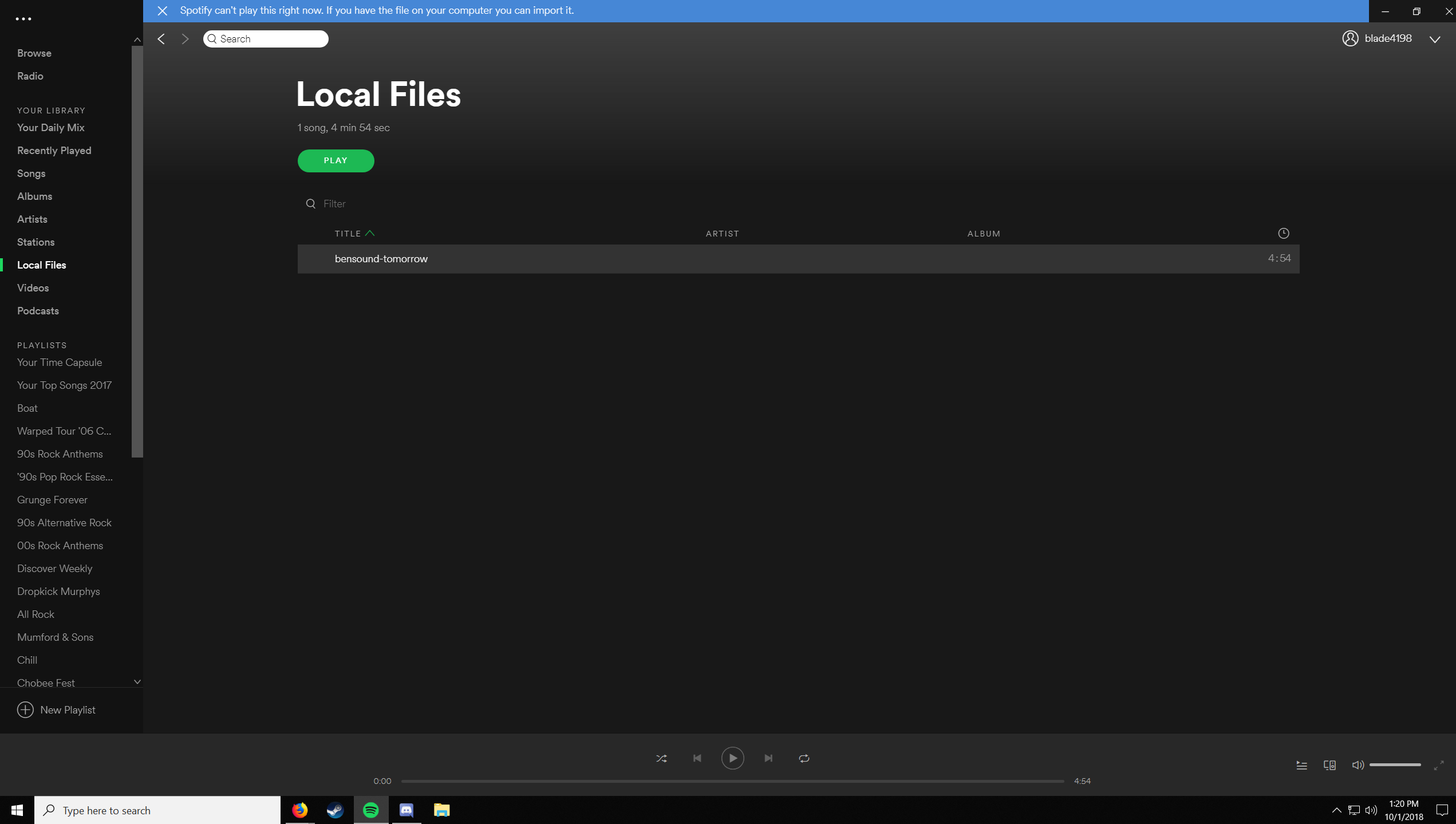 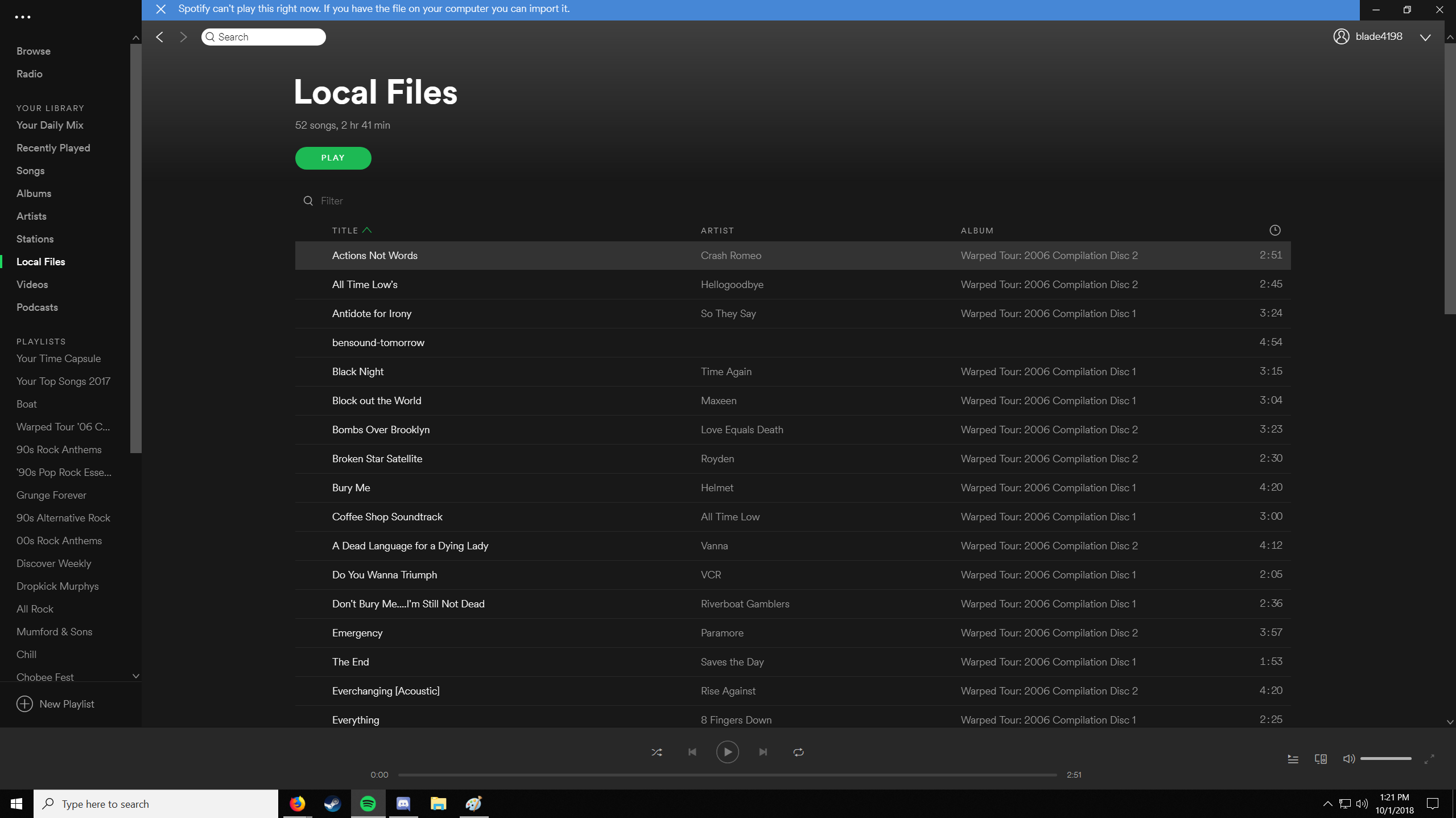 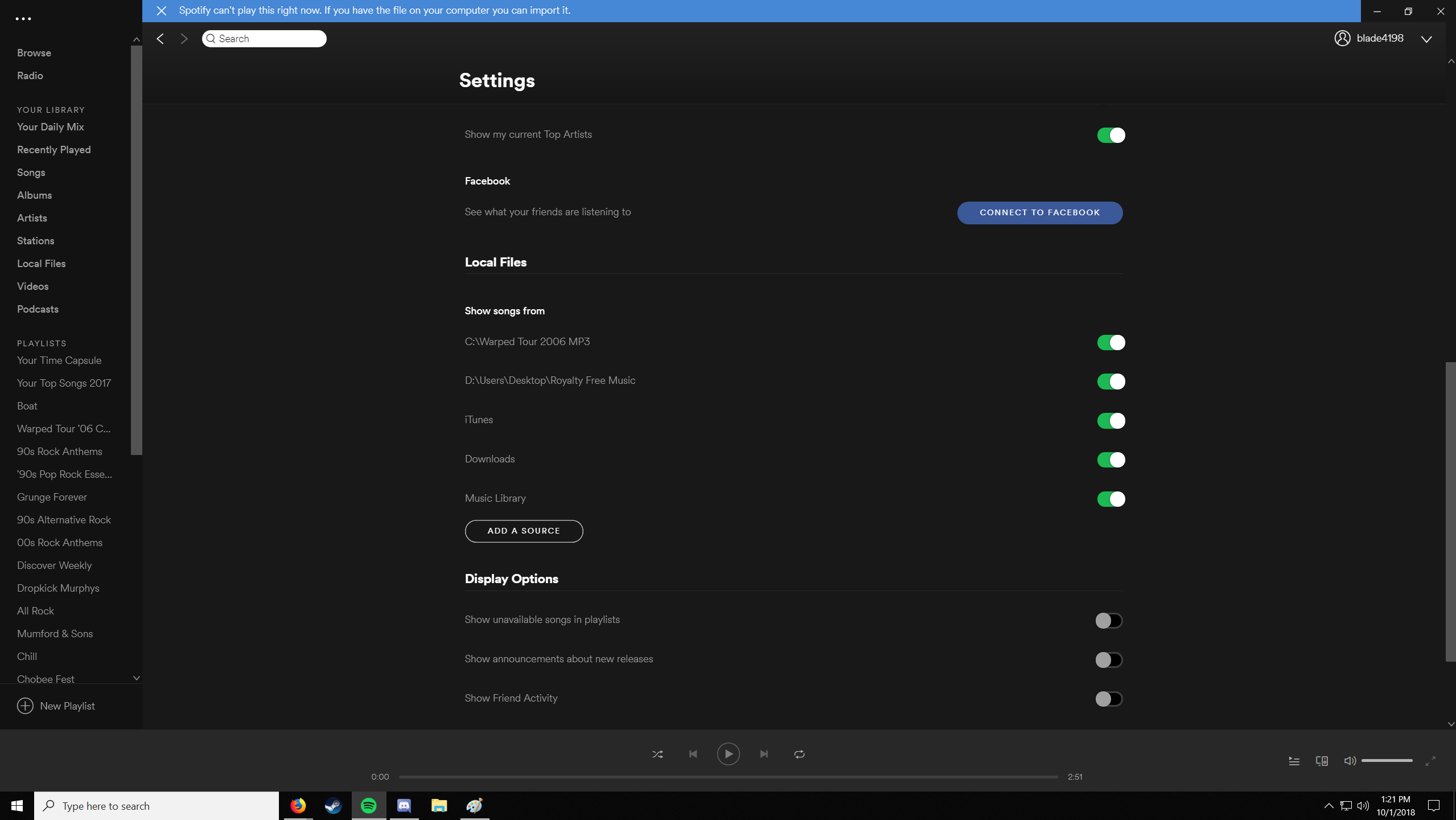 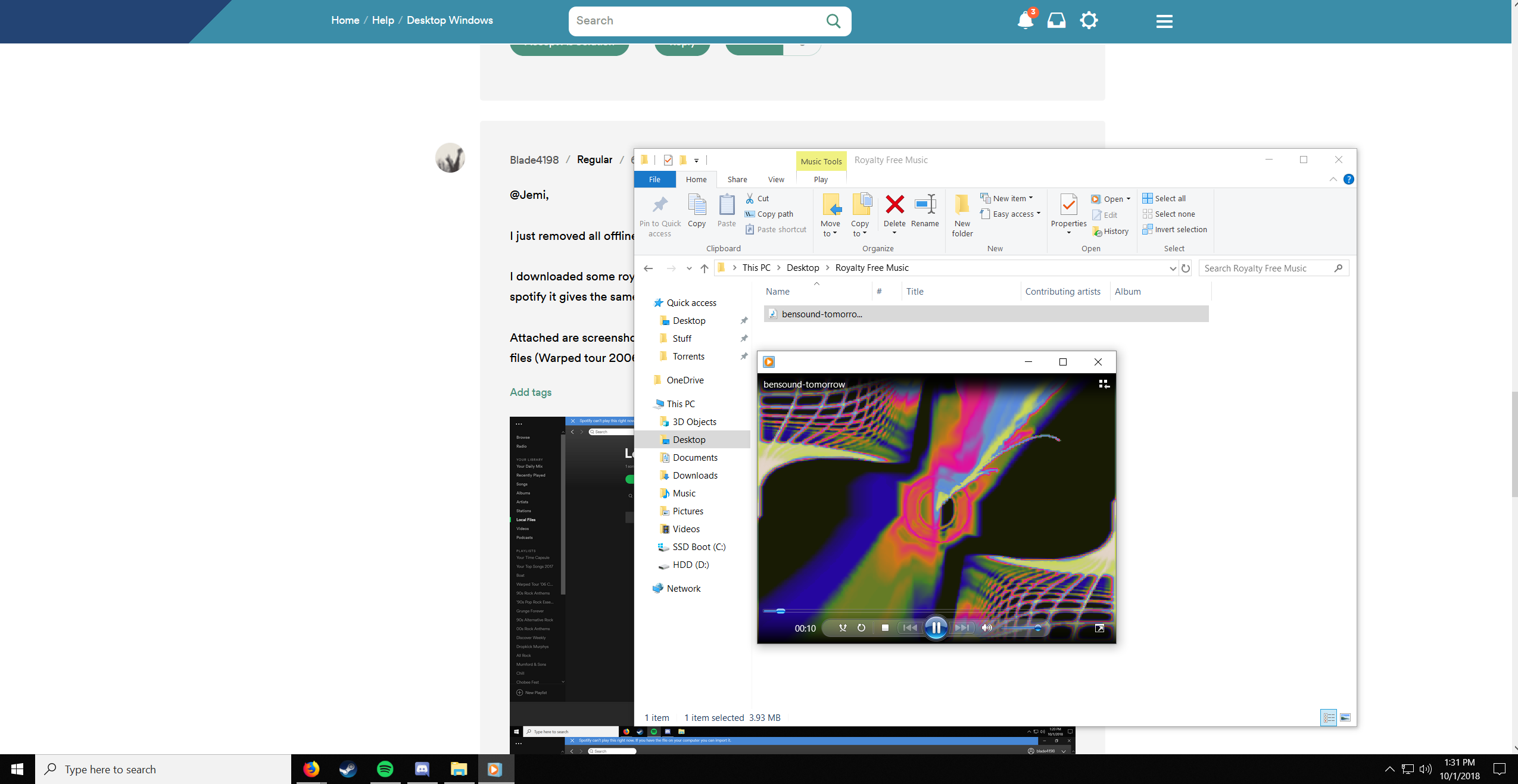 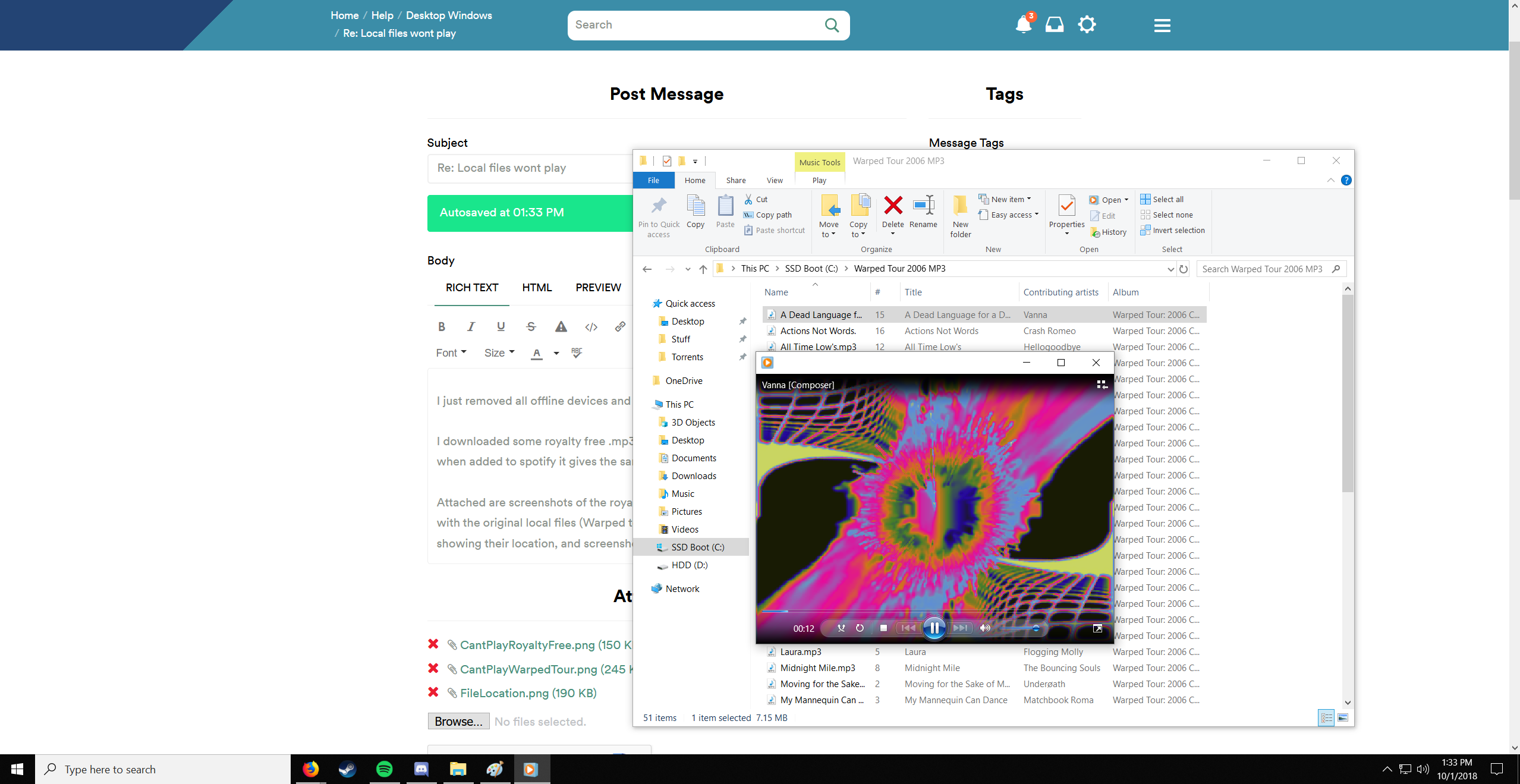 Could you go to your account page and remove all your offline devices?

Also, does this happen with other local files you might have? Let us know if you can assemble some new ones into a new playlist and download them.

A screenshot would be great here as well.

Last-ditch bump..? This is still not solved

The music files, from a CD I own (i.e., not pirated) burnt from the CD (.cda) to .wma using windows media player, then converted to .mp3 to be used with spotify, the .mp3 files work perfectly fine using any non-spotify media player. These files previously worked with spotify over a month ago. Upon opening the same playlist and trying to listen to the local files again now, it couldn't play them. No amount of uninstalling spotify or moving the files has fixed it.