zerkms
Gig Goer
No, they are busy removing useful features.
1 Like
Highlighted

Yep, I can confirm the memory problem...

I'm running 1.0.6 on OS X (Mountain Lion), on a Mac with 12GB of RAM. Yesterday, I launched Spotify and listened to about 7 or 8 tracks, then the music stopped. The client was unresponsive, so I checked Activity Monitor and saw this: 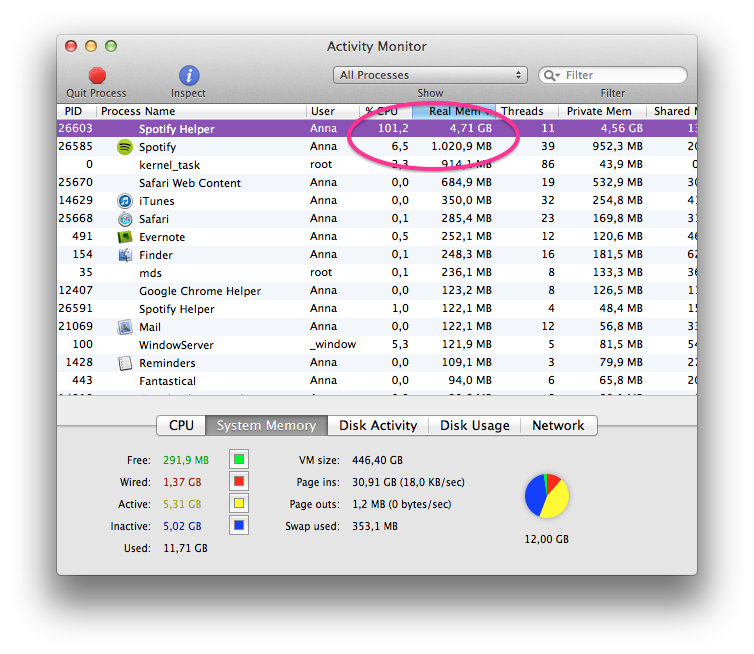 Almost 6GB of RAM used out of 12 and 100% CPU usage? Half an hour after launch? Come on guys, this is ridiculous. It is absolutely unacceptable for a music player to use that amount of resources, this has to be fixed. I thought the whole rewrite-disaster was supposed to make the client better... so many features have been removed and STILL the client performs about 100 times worse than version 0.8.5, which is at least 2 years old. You gotta be kidding me.

And before someone recommends the "cure for everything" named reinstall: I have been removing and reinstalling the client 3 or 4 times in the last week because of the memory hogging (and yes, I removed the caches, the plist files, the Application support folder... everything related to Spotify).

Come on Spotify, for the love of god, make this client usable!

PS: I should mention that I was using the new integration with Last.fm when the above screenshot was taken. For those not aware of it: you can start and control playback in Spotfy via the Last.fm website, but that shouldn't have any effect on the memory usage.

I've noticed memory leak too in the latest version. I have 4GB RAM, but Spotify regulary consumes up to 1GB and really affects the performance of my PC...

So we have a memory issue that is

I'd like for the Spotify staff / developers to pick up on this and kill the bug that's causing this, please.

I'd like for the Spotify staff / developers to pick up on this and kill the bug that's causing this, please.

^ this. Stability and performance improvements should be a priority for the fine folks at Spotify - I don't need fancy new features, I need a client that behaves and doesn't consume half of the available resources on my machine.

A quick update from my side: thanks to a tip from a mod over at the Last.fm forum I tried the old trick of leaving the preferences screen open in the Spotify client - and what can I say, I works like a dream. No resource hogging, only 600MB used compared to almost 6GB before (and the client doesn't claim several GB of inactive memory anymore either).

Sure, this workaround might be a no-go for a lot of folks since you cannot actively use the client. But for me it's a compromise I can live with, because I normally start playback and don't look at the client again until I need to switch playlists or something like that. I don't mind having the preferences screen open at all times, especially if it solves the memory issue until the bug gets fixed.

Let's keep posting screenshots of memory usage until they fix it

I'm just gonna add that this is still an issue (atleast for me) and this thread is from 2015...

This is a really obvious memory leak! How has it not been solved yet?