This issue began a couple weeks ago and is getting worse. It is completely unpredictable. I will be listening to music and suddenly it will go silent because the next song won't play. Sometimes it happens with every other song in an album, sometimes with the entire album. I click play but the time doesn't move, no music plays, and the album artwork is replaced with a circle.

I've uninstalled and reinstalled the desktop app at least 3-4 times in the past week. I've restarted my computer multiple times. Sometimes that fixes it right away sometime it makes it worse and now not a single song will play. I can't predict when it will or won't work.

I uninstalled/reinstalled today and restarted and now not only are no songs playing, when I click on random promoted artists or playlists on the homepage just to see if anything works, it says all the playlists are empty which is obviously not true since these are their promoted playlists. I've lost over an hour at work on this. Every day it's a guessing game if Spotify will work, and if it doesn't, for how long until it just decides to stop working. I don't know what to do anymore.

(Edit: I have been using the Spotify app for 1 year + with no problems until the last few weeks. Nothing about the computer has changed.)

Can confirm I am having this same problem and this is what it looks like in every playlist (on the desktop application): 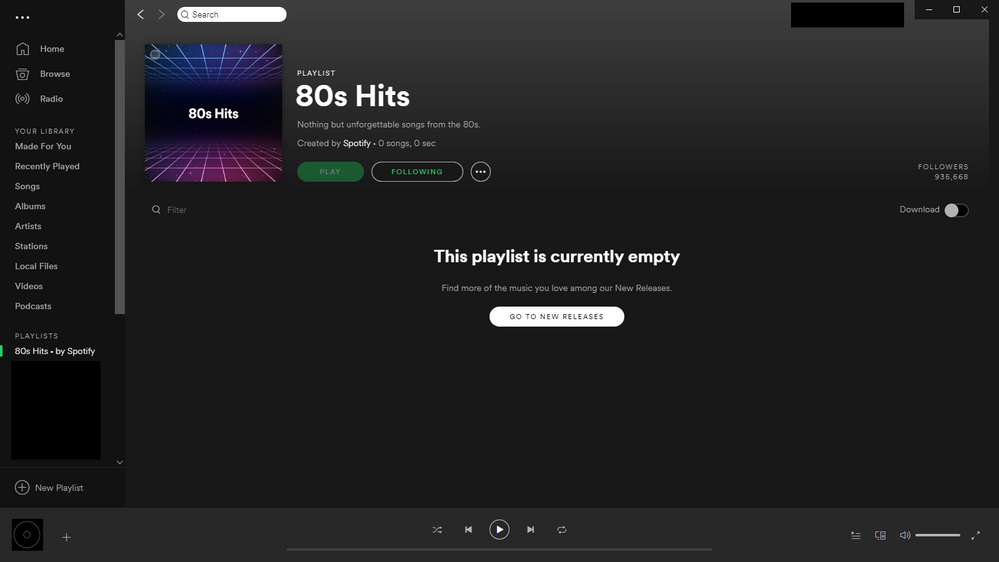 Upon clicking play on anything within spotify it then shows messed up characters in the place of the name of the song section of the "Now Playing" part of the application.

When I go to the Spotify Web Player, it then proceeds to show the songs, but not allow me to play said songs, so I have been unable to use Spotify on my desktop computer for close to a week now.

EDIT: This solution seemed to fix my problem:
https://community.spotify.com/t5/Ongoing-Issues/Playlists-appear-empty-on-desktop-app/idi-p/4680137

This a known bug with the desktop app and Spotify is investigating the issue. There is a workaround which seems to be working for some users. Can you try the following steps:

Hope that solves the issue! Let me know if you have further questions. I hope this will get fixed on Spotify's end soon.

MantisentilRock Star 14
Help others find this answer and click "Accept as Solution".
If you appreciate my answer, maybe give me a Like.
Note: I'm not a Spotify employee.
Reply
0 Likes
SUGGESTED POSTS