Why is my spotify often so slow?

Same here. It's been an absolute catasthrophe the last year. It is and should be embarrasing for Spotify how poorly their product works after this company just turned 10 years.

Spotify desktop is barely usable on my MacBook to the point that it's unacceptable. I've had spotify for 10 years and it's inconceivable that it's getting worse with time when you would reasonably expect it to be improving. I'm at this point where it's barely usable.

I've done everything that is suggested in these forums. I've restarted the application. I've reinstalled. I've cleared the cache. I've turned off local files. I've turned off machine acceleration. Clearing the cache used to make it better for a while but I've cleared the cache and reinstalled the application once every single day for a week with no improvement whatsoever. I can't browse at all and have to go through spotify web player in order to do so. I haven't been able to use the browse section without several minutes lag for a long time so I've gotten used to it but that does not make it acceptable. What's eggregious right now is that I can't even view my own playlists like I used to be able to do even with the browse being unsuable, not without waiting 5+ minutes for my own playlists to appear. Sometimes they never appear and I'll restart the app and if I'm lucky it will load for 5 minutes before it allows me to access it. I also have to force quit and restart the app several times a day to be able to use Spotify even in the poor functioning state it's in.

A new problem that's appeared this past week is that I cannot even right click the songs on my desktop app in order to add songs to other playlists and embed songs. You know, the thing you do to add a song to a playlist, embed, share it or QUEUE it. How is this acceptable???

Like I said, I've been a customer for 10 years. I want to be able to love Spotify as I've done for many years, but it's becoming extremely difficult to do so when the application isn't just running slow, but its most basic functions don't work.

Do you notice any issues in service with the web service at all?

From what you are describing with your app it sounds like an issue relating to the machine you are using rather than the spotify application. I am a Mac user and have not come across any of the problems you have outlined above.

These are the specs of my Macbook for your reference:

How does your machine compare to mine?

How do you mean issues in service with the web service?

My specs are not the same as yours, but I don't understand why the spotify application can't work adequately for an older Mac? None of my other applications or the laptop itself has problems or runs slow otherwise.

I closed spotify and it didn't do anything.

Thank you for that information,

The specs are a little different, but not drastically. I would kind of expect it to run on Earlier version of Sierra.

Have you updated the Spotify app up to the latest avilable version? This is often a good way to resolve performance issues.

You can check your Spotify version by going into the app and clicking on Spotify in the top left of your screen, next to the Apple logo.

Select About Spotify > I have attached a screenshot of my app for your reference. 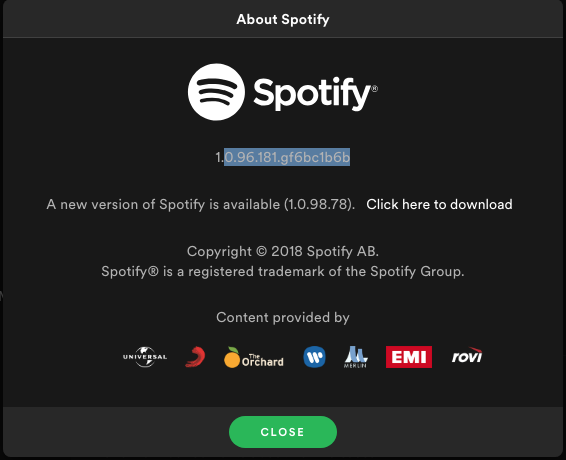 It is actual. Maybe it was hosts file, i use it to block ads, now it is faster when i removed it. Before it didn't load, today it took 2-3, before removing hosts file entries.

For any issues with Spotify, give these a try:

Tip: We recommend using Spotify with a WiFi connection, on a supported device that has at least 250MB available memory.

If you're still having trouble we want to know about it. Please start a new thread in the Help Boards so we can invesigate (this thread is quite old from 2014).

@Meredith the fact that this thread is so old but still getting comments would indicate that the problems have existed for years and never been addressed by Spotify. Doing all of those additional steps (uninstall/reinstall, deleting folders/clearing cache, etc) is all Spotify ever comes back with, and not only is it a huge pita, the problem will just come back again eventually. That said, I think the key in your comment is this bit "a supported device that has at least 250MB available memory." It seems that your apps have become resource hogs, and so us folk with older devices are getting horrible lag. The only device that seems to play without lag is my Echo Dot, which of course has no graphic UI.