This is more a bug, so I don't know if I'm supposed to submit it differently than an idea/feature request.

When albums are made by two different artists with their names equally listed as the album artist, it sometimes adds liked songs from the album to the "liked songs" of just one of the artists. Commonly among classical albums, Lang Lang will do an album of music written by Chopin, but since the name Chopin is also on the album, it only organizes it on Chopin's profile, even though the album is by Lang Lang performing Chopin.

In the first screenshot you see where it doesn't add the liked songs from Dirty Loop's newest album because it only adds them to Cory Wong's page even though they show up on the Dirty Loops page, just not in the liked songs.

The last screenshot shows how NONE of my MANY Lang Lang albums get categorized under his name. My library says I have no like songs or albums by Lang Lang. These are issues that need to be fixed. 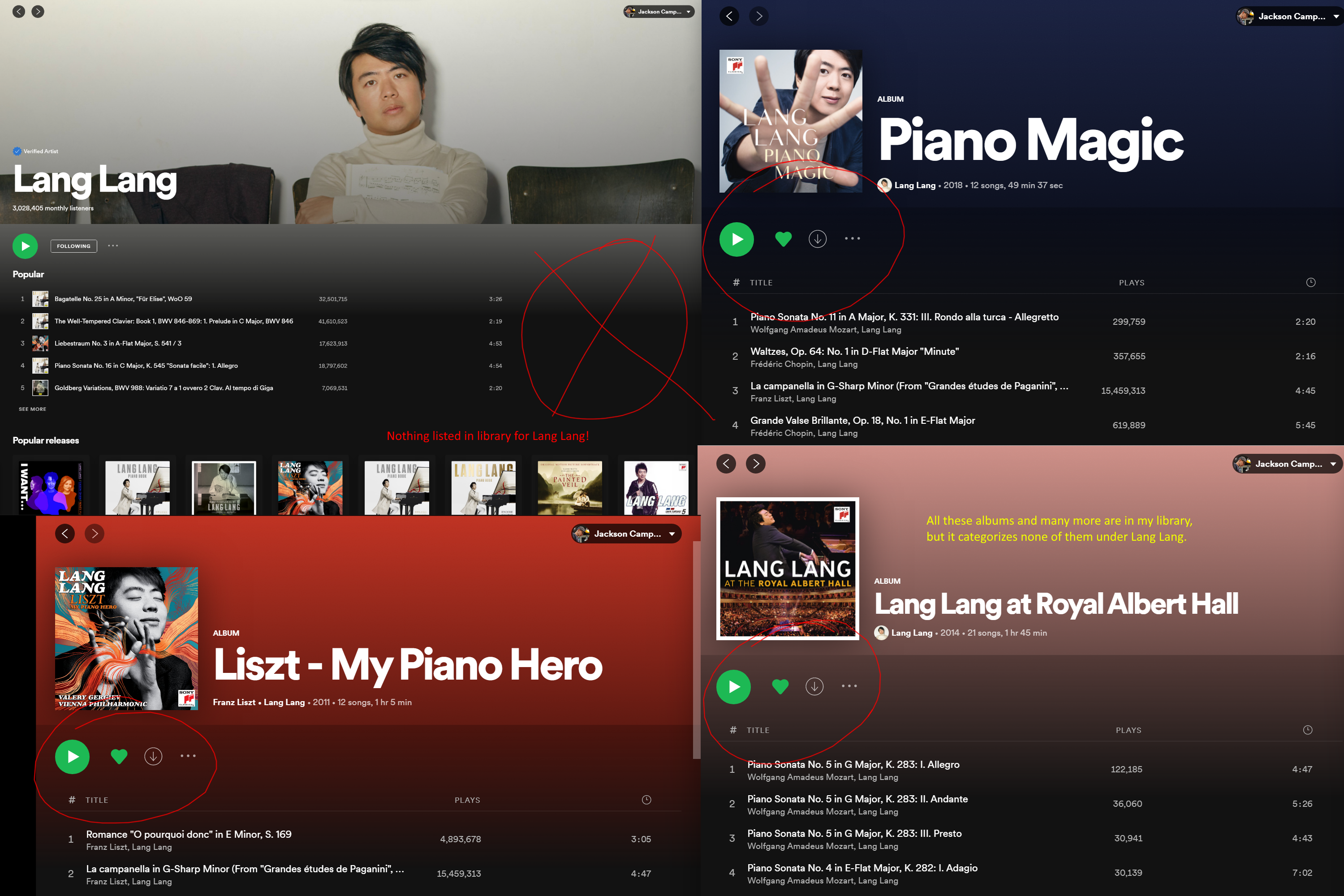 Thanks for reaching out here in the Community 🙂 We moved your post from Ideas, since it doesn't qualify as one.

Would you mind letting us know which app version you're currently running?

Also, is this happening across all devices or only on desktop?

JacksonCampbell
Casual Listener
It's a Spotify categorization problem, so it is not related to a specific
platform or app version. This has been a problem for years. Albums with
multiple artists don't get added to the library of the main artist. Very
prominent among almost all classical music.

Thank you for your reply.

In order to investigate this further, could you send us the URL of some songs you're having this issue with? This can help us investigate further.

I’m not the original author of this post. But I’m having the same issue myself. And it’s one of the deciding factors on whether I’m going stick with Spotify over Apple Music. Here’s one song, as a large example of the current issue:

This defeats the purpose of the Artist’s Liked Songs as a tool for finding all the songs from an artist. If this feature doesn’t work as intended, then I’ll need to make a custom playlist for every single artist that I follow closely.
So what’s the point in Artist’s Liked Songs Playlist, at all, if I doesn’t include collaborations as well?

Thanks for your reply in this thread 🙂

We appreciate you taking the time to share your feedback with us, and will make sure to pass it onto the right folks. We always strive to improve our users' experience and this helps our decisions going forward.

We'll be here if anything else comes up. Once again, thanks for the feedback.