Same thing happening to me for about 7 days now. Some followers activity updates at random times but most of it has not changed in over a week now even though I know they are using Spotify. PLEASE FIX THIS SOON!

Ah, yes. I'm glad it's not just me (not because I want everyone else to suffer too..). I noticed the publish activity feature was turned off, and I immediately got excited and yelled at my husband to turn his switch on. Buuut.. it didn't do anything. All my other friends had dropped off my feed, and he's on day 5, yet he listens every day with me. At first, I thought that it was coincidental that the update happened and nobody was listening to music, but now I'm quite certain that's what happened. I'm also certain the same update caused an issue with Discord's "listen along", as it hasn't worked since that day, either.

Same here... according to my feed, no one is listening to Spotify anymore.

I'm not going to be a snitch...but I have a feeling it's something to do with people using Cracked Spotify Premium. I've noticed some of my friends whose music status that are being updated are free/cracked users. Meanwhile, my friends who I know are Paid Premium users are unable to have their status updated to other players. I've tested this myself by checking my status on a friend's account and it's the same. My activity is apparently inactive for 5 days+.

This has happened to me as well !!! a week ago, half my freinds activites stopped updating even though I knew they were still listening to music !!! Ive tried all the recommended things such as re installing and logging in and out but nothing is working.... i really hope spotify can fix it really soon !! and if anyone has anyother solution to help fix it, that would be great...

I think the problem (or one of the problems) is that the Spotify app no longer has access to the Facebook Friends List. I do not have the option to allow Spotify to access my Friends List, and when remove the app from Facebook and try to re-authorize, the option no longer appears either. 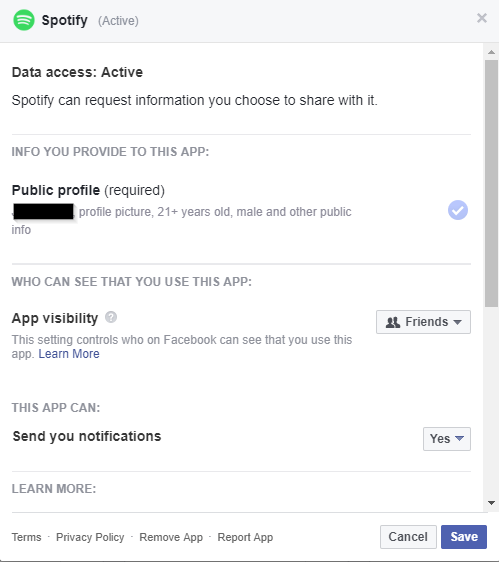 This screenshot is from my Duolingo app, to show you what I meant above. 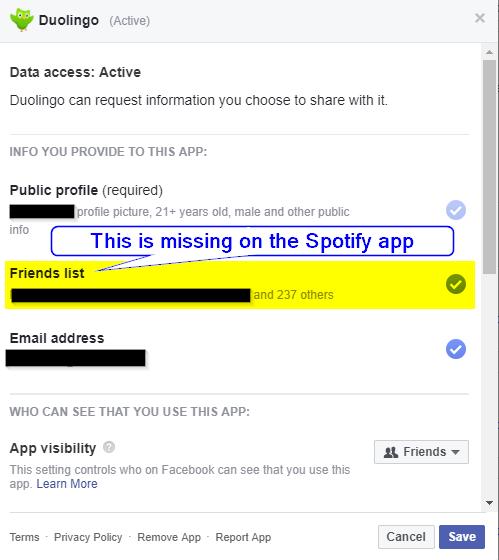 This is definitely not a pirated Spotify issue (my friends who are having trouble all have paid Premium acconts), and it's not a Facebook privacy issue either – several of my friends (including myself) don't have Facebook accounts but just started having problems with the social feed this week as well. 😕

I think the problem might be two-fold. Friends who are not connected to Facebook are now showing in my feed again today (just 2 or 3 friends), but I'm still seeing (0 Facebook Friends on Spotify), and none of my Facebook-connected friends are showing in the feed.

My friends have always been listed in my feed... just shows no recent listens. When I open Spotify, it will show no one currently listening and the most recent listen will have been 20-30 minutes earlier up to 3-4 days. I did see a post about Spotify permissions expiring on FB so I checked that and it turns out mine had so I renewed it... no change. So it may be that everyone expired on or around the same time and until my friends renew, they won't be listed (or won't update). And since everyone is concerned about FB and privacy right now, the chances of this happening are slim, you think?

I think the problem is unrelated to FB.  I un-linked my Spotify account from FB a while ago.

strange. when I listen to my friends' playlists, they can see my activity, but when I turn on the random artist or my playlist activity is failed. what the **bleep** Spotify -_-

My wife and I are having the same problem. Both of us are avid listeners, but our friend feed didn't update for over a week, and now that it has, it's not showing live nor updating some people at all. It's very frustrating. We are premium members and like the social aspect of Spotify as we can see what each other is listening to. I hope it gets fixed soon.

I can't believe it's been over a week and still properly not fixed.

vlimao
Roadie
Last year, Spotify's Support Team told me that the recently played artists list would only update if the songs were played from Spotify's playlists or from the artist's page/albums. Unfortunately, it seems that the same strategy is being applied to the friend feed. If you listen to your personal playlists, the recently played artists list and the friend feed won't update.
6 Likes

i am still having this problem, now the friend feed will sometimes update but not like it used to. Hope they fix this !!!

Is this gonna be fixed? Can a spotify official aknowledge this and give a response

I'm not sure that is the problem.  I can seen when my friend is listening to his personal playlist on his phone, but when he's at home listening on his PC, there is no update at all.  Saw a blip of an update about a week ago, and then nothing again.  Very frustrating.