Spotify is the last 32-bit app on my Mac.

That means when it's launched (which is all the time), OS X has to load all the system frameworks into memory a second time, but now the 32-bit versions of them, next to the 64-bit versions already there. Just to accommodate Spotify. (source: https://developer.apple.com/library/mac/documentation/Darwin/Conceptual/64bitPorting/indications/ind...)

As such, Spotify invisibly takes up way more memory than what it actually needs to run.

I can understand the need for Spotify to be backwards compatible with 5+ years old Mac hardware in use as media players and such, but that can be accommodated with a fat binary, including both 32-bit and 64-bit code.

In 2013, it is a bit strange that lots of Mac users of Spotify have to pay this memory burden of the past, while where is an elegant solution available in the form of fat binaries.

Another thread about this subject:
http://community.spotify.com/t5/Help-Desktop-Linux-Mac-and/No-64-bit-Mac-version/m-p/85001 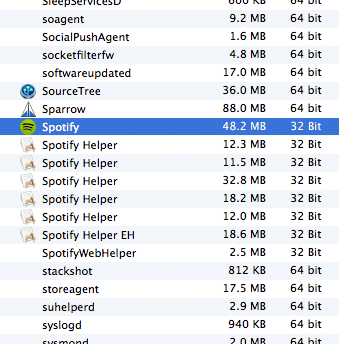 Hello everyone. Staff here. We’re happy to announce that Spotify for Mac is now available in 64-bit. While we don’t have any news about the Windows app, we’ll be sure to update the community once we do. Enjoy!

PLEASE Spotify. This is embarassing.

Also please fix Spotify Helper. It always get stuck on my system. It keeps searching for music from local files and won't stop searching. Sometimes takes up a lot of CPU.

Rorey
Spotify Legend
Status changed to: Not Right Now
Hello everyone. Staff here with an update. In the recent past, our desktop team has been working hard on improving our looks, as well as the new Your Music feature. You can find more information about these improvements here. http://news.spotify.com/us/2014/04/02/spotify-paints-it-black-with-new-look/ In the near future, we're going to focusing on the quality of the desktop app so we're going to have to mark this idea as "Not Right Now". We want to be sure we're continuing to offer a fast and stable desktop version of Spotify. We may come back to this in the future so please add your comments and votes. Thanks for the idea!
1 Like

One year down.  That means we'll have a 64-bit bersion in... two more years?  Cutting edge in 2016!  I keep noticing minor cosmetic updates to Spotify, none of which provide significant improvements to the user experience.  However, a 64-bit app that would result in performance improvements would be welcomed.  The vast majority of users have no clue what 64-bit means and why it would provide an improvement.  As such, it's unfair to provide this feature based on votes.  Maybe the market leader in online music streaming should bring their app to 2011 for no other reason than they should be providing the best.

Spotify is literally the only 32-bit app on my system. Please, developers, get rid of all 32-bit dependencies and build a 64-bit version of the client, the community has been begging for this "feature" for years now.

I'm sorry, but that's not acceptable.

However, not providing basic technology to your end users is unjustified.

Starting with 10.8 (bearing in mind OS X is currently at 10.10), no 32-bit kernel is included and will not run on 32-bit processors.  Running a 32-bit application requires loading up a partial version of the entire OS X stack, increases memory usage dramatically, and runs slower.

I understand the goal of Spotify is to provide a streaming music service.  But the days of slow updates, and even update versioning, are long past.  The days of getting away with using outdated code is long gone, as computer technology is increasing faster than ever.  The days of having a mediocre interface with limited features... gone.

I feel the problem here is not that you need to work toward moving Spotify for OS X to a 64-bit architecture; the problem is you need to hire more competent developers and a project manager that knows what they're doing.  And move to an interface where the apps across every platform don't have disparities between them all.  The iPhone app, for instance, is a joke.  Sure, it plays music, but I barely want to use it.  Every other app on my phone has been updated to support the higher resolution of the iPhone 6 and 6 Plus, and then there's Spotify.

Time to hire a new project manager and a couple developers that know what they're doing, and stop trying to do it all.  And, for the love of everything holy, get 64-bit support, or I'm moving to a different streaming service.  Your app is slowing down my computer.

Chrome finally switched to a 64 bit build just now. As others have mentioned, this is the only app still using legacy 32-bit. As such it forces loading of otherwise needless 32-bit system files, slowing down the system.

Also, it would be nice to see a shop such as spotify, which prides itself on hiring great engineers, to spend some time on this even though the average marketing manager at your company doesn't understand the difference between 32 and 64 bit.

It is ridiculous that Spotify does not have a timeline regarding a 64 bit OSX version.

I should not have to use my phone to stream music in my office, when I have a laptop perfectly capable of doing so, with a much more pleasant UI. This has already done damage to my perception of spotify as a company.

"In the near future, we're going to focusing on the quality of the desktop app"

Did you read what you wrote? 64-bit would GREATLY improve the quality of the desktop app.