[All Platforms][Playlists] Playlists within a playlist

It would be nice to be able to create smaller playlists within a playlist.

You can still make as many main playlists as you want obviously but you would also have the chance to organise the main playlist. This means you wouldn't have to make separate main playlists having to add the same song several times. I believe it would be very helpful. 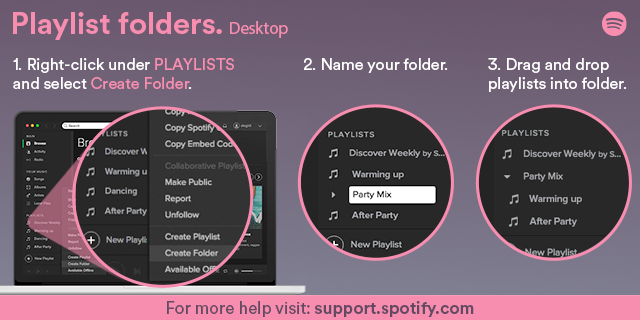 In theory you can sort of do this with folders. That is, you can have a folder F with a folder X with playlist A,B,C in it, and a folder Y with playlist D, E in it.  But the folder function is not very functional except for organising. So rather than reinvent sub-lists I'd like to support this idea with the following small changes:

1) Provide the ability to "play all" playlists (or folders) in a folder. At the moment you can do this on the desktop (great!) but not the app (boo!).

2) Provide the ability to "select and play" playlists (or folders) in a folder.  So in folder view there would be a checkbox to select and that triggers the "play selected" button instead of "play all".

The final feature I'd request is the ability to navigate to the containing folder from that playlist in the App.

Thank you for your feedback!

I'd like to ask, how do you make folders? I didn't know this was possible.

Is this an implemented idea? I don't think so, so why is this idea marked as implemented?? As usual you're only reading half of the useful customer requests.
Any decent music service and application has the ability to add individual songs, albums and entire playlists to the current (dynamic) playlist, aka "Now playing" or "Play queue", but not in Spotify. Apologies if it is possible, then the problem is that I cannot find the way to do it (and please, creating a new playlist for this purpose is not a solution).

The concept of the play queue is that it is dynamic and that you can add anything to it (or replace it with anything for that matter).