I realize there are already several threads regarding increasing the 10,000 Your Music / playlist limit. While I am one of many who feel this needs to be increased, that's not what this "Idea" is about.

The problem is Spotify does a terrible job at how this limitation is handled. If the 10,000 cap won't / can't be increased, please at least consider making the following updates to fix issues around dealing with the cap.

Spotify, I love you. Really I do. Even with this limitation, I can't recommend your service enough. I won't be one of many here who makes (false) threats of leaving your for another service, because frankly, there isn't a better option out there (I've tried nearly all). I'm an avid music lover (as my large collection indicates) and love all of the ways you provide to Discover new music (you so get me with my Discover Weekly playlist). Unfortunately the 10K cap, and even worse, how this max is handled, has made using the service difficult and frustrating lately.

Obviously, increasing the 10K would be the ultimate solution, but I assume either a performance (slow downs over that amount) or legal (Music contracts dictate max "saved music") issue is the sole reason this isn't possible today. So please, at least consider providing a better user experience around this cap for those "1%" of us who use your service the most.

Thank you for the consideration!

Thank you for posting this idea and adding kudos.
When you reach the limit of Your Music & Playlists, there is now a pop up that informs you about the 10.000 cap. You might still want to add your kudos to the idea about increasing that limit right here. 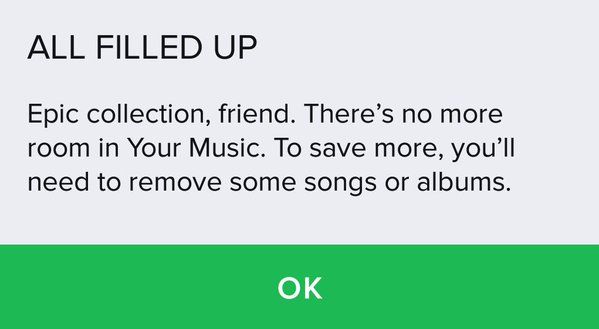 Thanks again for all your feedback.

To have a 10,000 song limit is as StoneAge as having a 140 character limit on Word documents!  Can you imagine?

That the "hardware" has to handle 140 character segments is no justification whatsoever for limiting the user's documents to 140 characters-- Simply "virtualize" that hardware limitation-- like Microsoft did in handling all the various >> "disk sectoring" schemes. <<

Spotify already has the playlist "size virtualization" infrastructure in the PlaylistFolder.  (laughing)  But in 1.0.16 and progeny, you cannot even List, Filter, or Sort the tracks in a Folder containing playlists!  Can you imagine?

mrzackzadek
Music Fan
For the love of God I hope this thread doesn't get merged with another thread.
2 Likes

This should really be changed cant believe there is a cap on the music library, thought it was just a bug when music didn't show up!

Marked as new idea. As noted, you may also want to give kudos and comments to this idea.

Thank you for posting this idea and adding kudos.
When you reach the limit of Your Music & Playlists, there is now a pop up that informs you about the 10.000 cap. You might still want to add your kudos to the idea about increasing that limit right here.

Thanks again for all your feedback.

Guys... (and girls...) Does ANY if you think this whole thread makes any sense and Spotify will read, let alone - they will change this?!?

It is absolutely more than ridiculous that we - as fare-paying-PREMIUM-users - are being limited in using this product on a fare base. Yes, we are limited in our choices! Why do we pay to be limited?  And what is so PREMIUM to this paid service except leaving out the commercials?

There is only a minority who report this 10.000 limit issue to be unsatisfying, annoying and to be indignant with. When Spotify looks at the percentage of how many people actually has reached 10.000 songs in their personal library, of course there is less than 1% who reaches the 10.000 limit! Because YOU CAN'T reach it! I got 9855 songs and this is called to be my max of 10.000 songs!

Please tell me lads & gents, how many of you are UNDER this limit and is told that they've reached the max of 10.000: I dare you to check your exact number of songs by going to your song list (songs in your music), then select them all (win: ctrl+a / mac: cmd+a) and drag to see the exact number of songs. 9 out of 10 it's LESS than this 10.000 while you've been said that you have reached your 10.000 limit!

Therefore: Dear Spotify:  You are fooling yourself with this explanation! I bet there are way more users who experience this problem; at least 222 pages of negative comments on this topic only on THIS site!!! And that's only those users who take the effort to report it! Did you already hear about the fact that only less than 40 percent of ALL unsatisfied people report their complaint at the responsible organization and besides that all the others (that's more than 60 percent of all unsatisfied people) tell their negative experience to a minimum of 15 other people instead of reporting it to you, Spotify? (If this <40% is already able to know WHERE they can report it!) Above that: and this is just a free tip: Of the non-complainants, 80% leaves to another provider/supplier without telling you at all!

So please don't come with arguments that only 1 % of the users reaches the 10.000 limit. You should take these comments more serious. You make a monkey out of yourself if you really think and take this measurement as an indicator of all the serious complaints and users that are annoyed about this limitation. If music should free your soul, you keep your customers detained by setting a limit on their choices!

So for all of you who want to get rid of this 10.000 limitation: First of all: make sure you've logged in on this Community and vote for this “Live Idea”. Make sure that we bundle all similar – liked threads: So click on the following link to bundle all votes in one and the same thread: https://community.spotify.com/t5/Live-Ideas/Increase-maximum-songs-allowed-in-quot-Your-Music-quot/i... (scroll to the top to see the vote button). Be aware that IF you already voted in the “increase-maximum-songs-allowed-in-Your-Music-thread” in the past, that you don’t push the button again, otherwise your vote will be withdrawn and it will bring back the number of votes! So only press Vote if the button shows “+ Vote”.

It is actually absurd that we have to vote to make Spotify change this! :@)

Second: Share this message as wide as you can or IF you can find shorter lines to the Spotify Management People let them read this post to wake them up.

Third: Ok, let me say that it’s not all bad there is at Spotify (they could have a better accessible and more direct support opportunities though) there are also a lot of good features. But these can also be found at other providers: Apple Music / Google Play Music for example, with much wider or no limitations. If you (users) really want to change this: LETS SET AN ULTIMATUM DATE TO abandon this limitation before we move and migrate to another music streaming service. This Issue has been reported by users since April 2014. Now we’re almost three years further on, no changes are been made since. It’s time to make this chance Spotify… Please provide us with an unlimited personal library. Let's say... before the end of April 2017? You’ve got enough time to do this, didn’t you? Three years… That should be a real and reasonable timeframe… isn’t it? In these three years, you could make a real (and proper) inventory of what the need of enlargement of this song limit really is instead of giving yourself just a false quote on how custom behavior works in relation to complaints handling. And if you are still blind to see and stick to your position that it’s only less than 1 % of your users that reaches the limit… what in god sake is the problem to increase this limit for “those few” people…?

Spotify: Don’t give us stupid arguments… What you tell us is “We don’t care about customer satisfaction at all”, “We don’t take our customers seriously”, “We don’t listen to the needs of our customers”. That are three ways you did NOT learn on your marketing-based-education to get and KEEP customers. When you want to keep us, take some action now! We’re still asking you friendly to disable this limit real soon before a lot of unsatisfied users will get their needs for music elsewhere.

Using the trick Amus-i-c described it shows 9,367 songs in my library in my case but I am pretty much at max (I could add maybe 5 songs or so)...

This is really ridiculous, especially when I can't add the new and awesome songs recommended to me by Spotify itself every Monday! Instead I have to juggle multiple playlists even though I just love to simply shuffle ALL of my songs! 😞

Please increase this very low limit or even better get rid of it completely!

Is it really such an impossibility from a technical standpoint???

I dont even have nearly the limit and for the last couple weeks Spotify is not letting me add songs to my playlist. It is all new releases that are not already in another playlist that are having this problem.

It will add a ghost that wont play and says its in the playlist but you cant see it or access it. Sucks because I curate a new music playlist that will die if not updated. I cant even find the correct place to post this error.