I understand that including all album artwork is considered a premium feature, but at the same time, all people who participated in the making of an album should be credited for their work. Musicians, composers, producers, engineers and everybody involved - plus all the "special thanks" - people, deserve to be credited.

This could be implemented by simply displaying the album credits in text form, along with the original front album cover and tracklist. No lyrics, pictures or bonus features, just the credits. Not linking, but displaying the credits along with the album front cover + tracklist by default, in all versions of Spotify. The complete album artwork could still be a Spotify Premium-feature, with this approach.

This is not a feature for the listener - most people don't care much about songwriters or who plays bass on track five of this album, but from the perspective of the music creators, this is very important - their (ok, our) careers depend on these little things. Being associated with the music you've recorded (or written, engineered for et c) is still a very important part of building a career in this business.

Spotify users around the world can now view songwriter and producer credits for tracks on the desktop platform and on iOS.

On desktop, simply right-click on a track and select “Show Credits” from the menu of options to view information on performers, songwriters and producers. 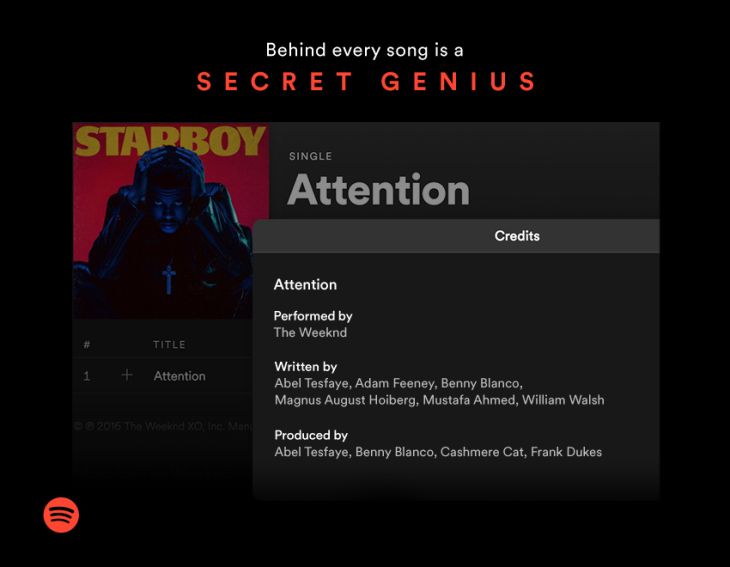 Please see my other post "Adding album info" for some ideas on how to implement this feature.

This way, if people like the sound of a certain album they can check out who the engineer was, who mixed it, who played drums, etc., It would really help engineers and studio musicians get jobs, and would help spread music to people like never before.

There is a capaign going on to help start this as a common practice.

One thing I miss about online music is I don't get liner notes. I often really want to know who wrote the music, produced the track(s), engineered the stuff, etc. These are credits that people care about! It's not only about the artist.

One thing I miss about online music is I don't get liner notes. I often really want to know who wrote the music, produced the track(s), engineered the stuff, etc. These are credits that people care about! It's not only about the artist.

There's an app called "The Complete Collection" that offers the entire songbook for albums. It's a great idea but sadly only a few artists are available there at the moment.

I wish there was a more complete collection for Album Booklets. I know iTunes offer them for complete albums but the stores I actually use do not offer them. Argh 😞

Also, a link to engineers/producers/Performers so that you can find what else work they're related to.

RaG
Newbie
I totally agree. As a musician i am interested very much in who is playing on an album. This would be very important to every interested listener. .....
6 Likes

It would be very nice to have a list of albums.

Maybe with additional information like the cd insert, backside etc.

I think this would be important feature in Spotify especially now since many musicians are somewhat dissatisfied in the compensation they get from Spotify streams. Adding thorough credits to the album would be at least some comfort to them. In addition, it would be a unique feature in the web, currently it is really hard to find album credits, players, engineers etc.