Listening to JRE Joe Rogan Experience on Spotify using my phone. The app uses too much data as it streams video. I would love the option to turn off video feed to save on data, otherwise I cant freely listen to JRE wherever I am.

I do love the video feed, much better functionality than Apple podcasts, so I do love having this available, but I want to be able to switch it off especially when not on wifi.

Another feature could be the option to download Audio and / or video in advance (so we can choose if want to download audio only or video as well). That would solve a lot of my data problems.

Thanks for your feedback and suggestions on this one!

You'll be happy to know that it's now possible to toggle off video for podcasts when you're not on WiFi. 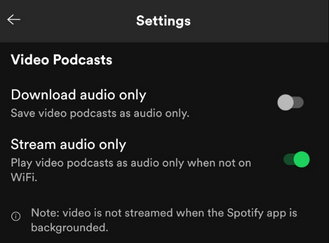 I live in BFE, Montana. Cell service isn't possible everywhere and it's one of the reasons I've been a premium subscriber. With the video, it sucks so much bandwidth that it'll buffer for a couple minutes and I'm left with fiddling with my phone trying to get it to play while driving on an icy mountain road. It's irritating, please give us the option to shut off video.

Premium member, same issue here too and to me it sounds very basic feature to provide. Spotify has the worst UI in my opinion, I find it really difficult to navigate at times in my Android device and on DT..  Lucky they are still making money and not bothering about their platforms usability.  May be there isn't a good alternate out there !!!

Currently, I can enable "only save audio stream for downloaded podcasts".  However, the app will then stream the video in the background, without me even seeing it, and cost me a bunch of data charges, unless it is in offline mode or airplane mode.  I shouldn't have to go into the menu everytime I want to play downloaded content.  The app should just play what I downloaded, and not stream anything else on top of it.  If I wanted to stream the video, I wouldn't have downloaded the audio track only.

This issue cost me $20 last month.

A toggle to disable video completely would also solve the problem.

How many votes are necessary? Is it some hidden magic number that we aren’t privileged to?

I imagine we would have more of a response if this were posted on Twitter.  (I’m not on Twitter or I would have done this first)

There’s a link (Link Here)  in the Spotify Status update that states:

“The Community team talks with various other Spotify teams several times a month about ideas with over 500 votes (our criteria for being a top idea). It’s from these meetings that we apply one of the following statuses to each idea:

Good Idea, Give It Some Kudos
We like this idea. A decision has not been made but we want to see how much the Community continues to vote on it.

Not Right Now
We talked about this internally but it’s not on our timeline right now.
It should also be noted that we cannot comment on new country launches, nor third-party integrations, before they come out. For this reason we will generally set those ideas to Not Right Now.

Under Consideration
This has been brought up internally.

Watch This Space
This feature is coming. We have a rough timeline for a release.

Implemented
This feature has rolled out.

Of course, votes are not the only deciding factors of what Spotify is going to do or not do next. We also have to consider the following:

Further, if we build something that didn't originate from the community, we'll take the time to announce it if a corresponding idea exists in the community. Even if it hasn't necessarily reached 500 votes.”

So that means we’re ~50 votes away from being a top idea! Share this with a few friends and we’re solid 💪🏻

Agreed. Not being able to turn off the video is**bleep**.  I haven't  listened to  joe rogan ever since spotify.

codermyers
Music Fan
Would be cheaper not to listen to Spotify at all. but then why post here? I
got around the issue by moving the podcast to my watch, which can play the
audio offline, but has no video playback capability.